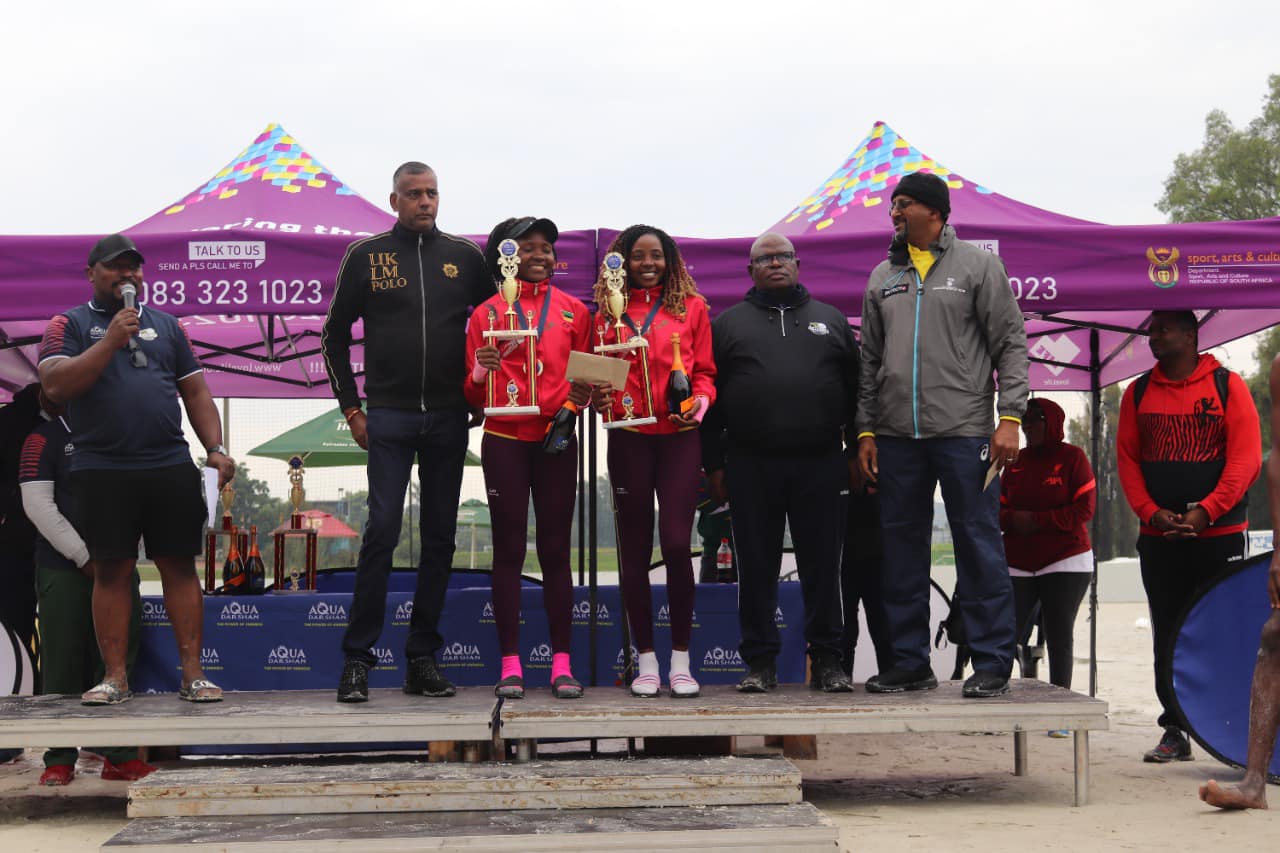 The 3 -day Zone VI Beach Volleyball Tour hosted by Volleyball South Africa at the Pirates Beach Arena in Greenside, Johannesburg was a great advert for volleyball among the member countries of the Zone.   The competing countries made their intentions clear from day one that the competition to get to the winners’ podium will be a difficult one. The teams kept to their ‘’threat’’ as the scintillating action packed encounters were a visual delight for the fans.

Not even steady rain that lasted throughout the day could put a damper on the spirits of the semi-final contenders who relied on their strength, fitness and skill to book a place in the lucrative finals that promised prize money in US dollars. The teams from Mozambique who entered the 2nd leg of the Zonal competition as firm favourites won their semi final matches to register an all-Mozambican final in both genders. This was history in the making in zonal beach volleyball competitions.

When Ana Paula and Vanessa squared up to lock horns with their compatriots, Angela and Natasha in the women’s final the fans expected ‘’fireworks’’ as both teams had not lost a match on their way to the final. The fans did not have to wait long for the ‘’fireworks’’ to begin when the tournament’s favourites power attacker Vanessa kept the score board ticking with her trade mark explosive attacks.

The encounters between the two teams were a sheer delight to watch as their movement on the court was swift, their cover of the attacker and blocker was well timed. The athleticism and professionalism of the Mozambican lasses were lessons to be learned by all. Their enjoyment on the court notwithstanding the occasional hiccups made was pretty evident.

When Angela and Natasha were facing defeat at 14-10 they came alive by stepping up a gear and taking the fight to the tournament favourites. Their efforts paid off as the score reached 19-16. At this stage the fans joined in the action and urged on Angela and Natasha to upset the tournament’s top ranked pairing of Ana Paula and Vanessa. Despite the fans rooting for the under dogs Ana Paula and Vanessa registered a well deserved 21-16 win.

The 2nd set saw a rejuvenated Angela and Natasha ‘setting the court alight’ with a quick power play strategy that made their opponents immediately reassess their game plan and put measures in place to stop the rampant Angela and Natasha causing an upset win.

The exchanges at the net by attackers and opposition blockers excited the fans as power play was the order of the day. With the score board kept ticking evenly it was the pairing of Ana Paula and Vanessa that ‘broke’ the deadlock and put daylight between themselves and Angela and Natasha when they posted a hard fought 16-14 lead.

Given the delightful encounters between the two teams the fans did not want the match to end. At this point their support of the ladies from Mozambique reached fever pitch. This support raised the level of the match as both teams fought toe to toe. At 18-17 the 2nd set could have gone either way. The experience of Ana Paula and the quick hitting Vanessa gave them the edge over their opponents when the score line slowly moved to 20-18.

When Natasha’s service at this crucial point failed to clear the net Ana Paula and Vanessa hugged each other in sheer joy and danced on the court as the tournament’s gold medallists.