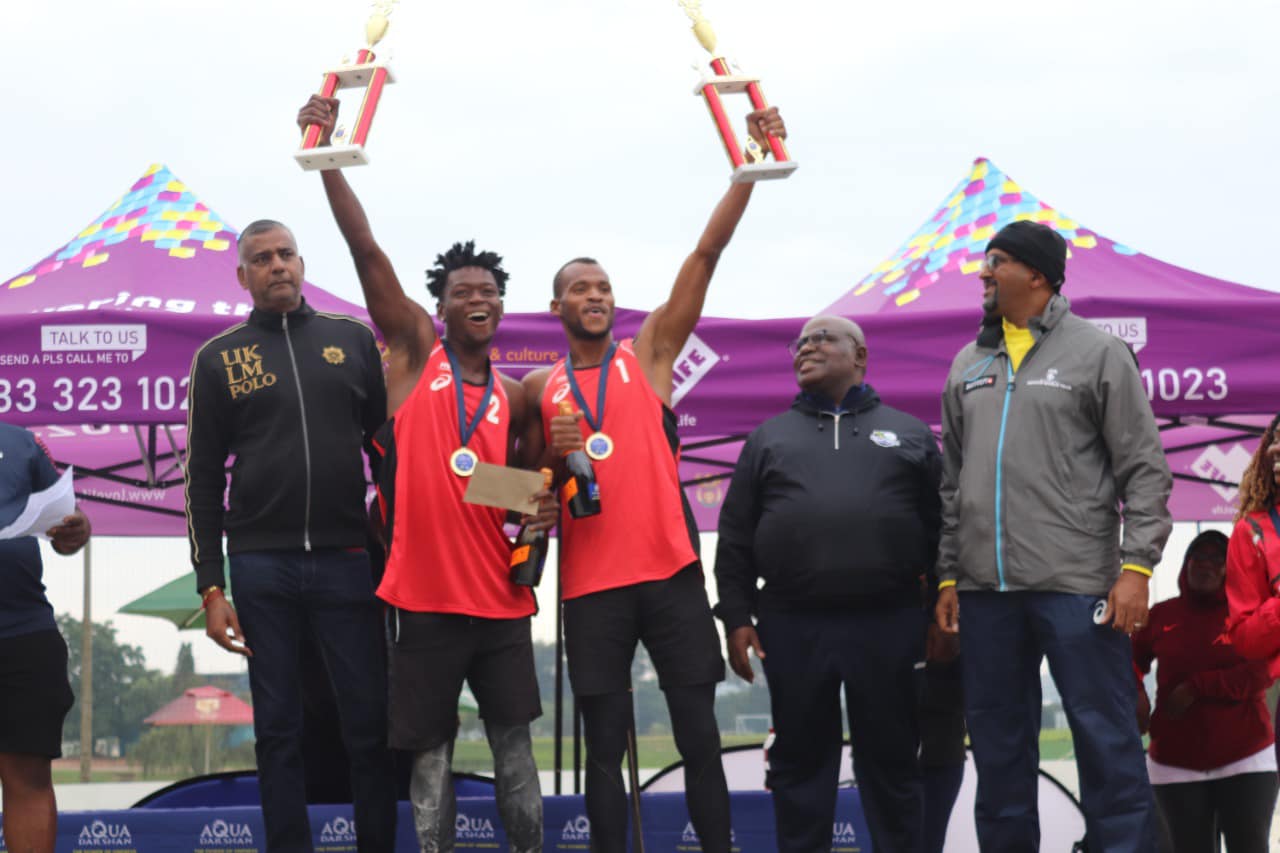 Given the ‘on court fighting’ spirit and high skills levels exhibited by Mozambique’s top two contenders it came as no surprise when they breezed in to the finals of the 2nd leg of the Zone VI Beach Volleyball Tour hosted at the Pirates Beach Arena in Greenside, Johannesburg.

The tournament’s top ranked team of Ainadino and Jorge faced their countrymen, Jose and Osvaldo in what was billed as a clash of the giants. True to that description the two Mozambican teams did not fail to thrill and entertain the fans who braved the rainy weather conditions to be part of the action in the zonal finals. The Zone VI finals have a reputation of exhibiting an explosive brand of beach volleyball. Both teams were never afraid to attack with full power and occasionally chose the deft touches into unguarded spaces in their opponents’ court.

While Ainadino took care of matters at the net as a blocker of note he also played the role of a “”master blaster’’ power attacker that had a fair share of the points to his name. Ainadino partner, Jorge was arguably the best all round player in the tournament. His reading of the game, positioning on court to pick up attacks that came off the block or hard driven balls and his penchant to pick the correct attacking option put him above his competitors at the Johannesburg event.

Power attacks were the order of the day for both teams in the opening set. With the fans enjoying every ‘on court’ move of their favourite teams urged the players to go the extra few kilometres to reach the podium as the tournament’s gold medallists. All four players ‘’pulled the trigger’’ every time they made contact with the ball regardless of the strength of the blocker’s ability to stop them in their tracks. At one point Osvaldo was the pick of the attackers as he was unstoppable. When Ainadino eventually managed to contain the rampant attacking force of Osvaldo it forced Osvaldo and his partner Jose to concentrate on strengthening their defence at the net and choosing the softer option of attacking from time to time.

With the scores at 10-8 in favour of the tournament favourites the wily Jorge played off the opposition blocker’s out stretched hands to pick up valuable points as the score board moved to 12-10. The closely contested encounter had all the thrills and excitement of a ‘world championship’ final. All four players were central to the delivery of an action-packed encounter that raised the eye brows of players and coaches who either did not make it past the group stages or were unlucky to lose in the knock out stage. They marvelled at the speed, agility and technical expertise of the players contesting the final.

There were times during the final that the teams could not be separated as the score board was kept ticking evenly from 14-14 until 17-17. Under a pressure situation Jose unleashed a bullet attack that sped out of bounds to give Ainadino and Jorge a slender 18-17 lead. When Jorge picked up two consecutive points it put them in the pound seat to win the encounter. A well disguised ‘dink’ from Jorge earned them a 21-18 first set win.

They often say that it’s a bad omen when one serves the first service in the 2nd set into the net after having lost the opening set. The omen proved to be true as the duo of Jose and Osvaldo who lost the first set went on to lose the 2nd set and the final.

Trying to side step the issue of the bad omen the 2nd set was fiercely contested. Osvaldo lived up to his reputation as a ‘’no nonsense’’ attacker as he piled on the pressure with an array of power attacks. Fighting back the combination of Ainadino and Jorge gained a slender 10-9 lead on course to win the event.

Like the opening set both teams threw caution to the wind and set the court alight much to the delight of the fans, an explosive display of power volleyball. The score board was kept ticking evenly as the battle on the court raged on.

At 11-11 the hard hitting Ainadino played a crucial role both as an attacker and power blocker to propel his team’s score to 14-11.

At 20-17 Ainadino latched onto a perfect set from Jorge to hammer home a cross court winner by a 21-18 margin. Ainadino and Jorge went on to lift the coveted silverware and the winners’ prize money of $300 to retain their position as the Zone VI number one beach volleyball pairing.

The 3rd leg of the Zone VI Beach Tour is scheduled to take place in Botswana.