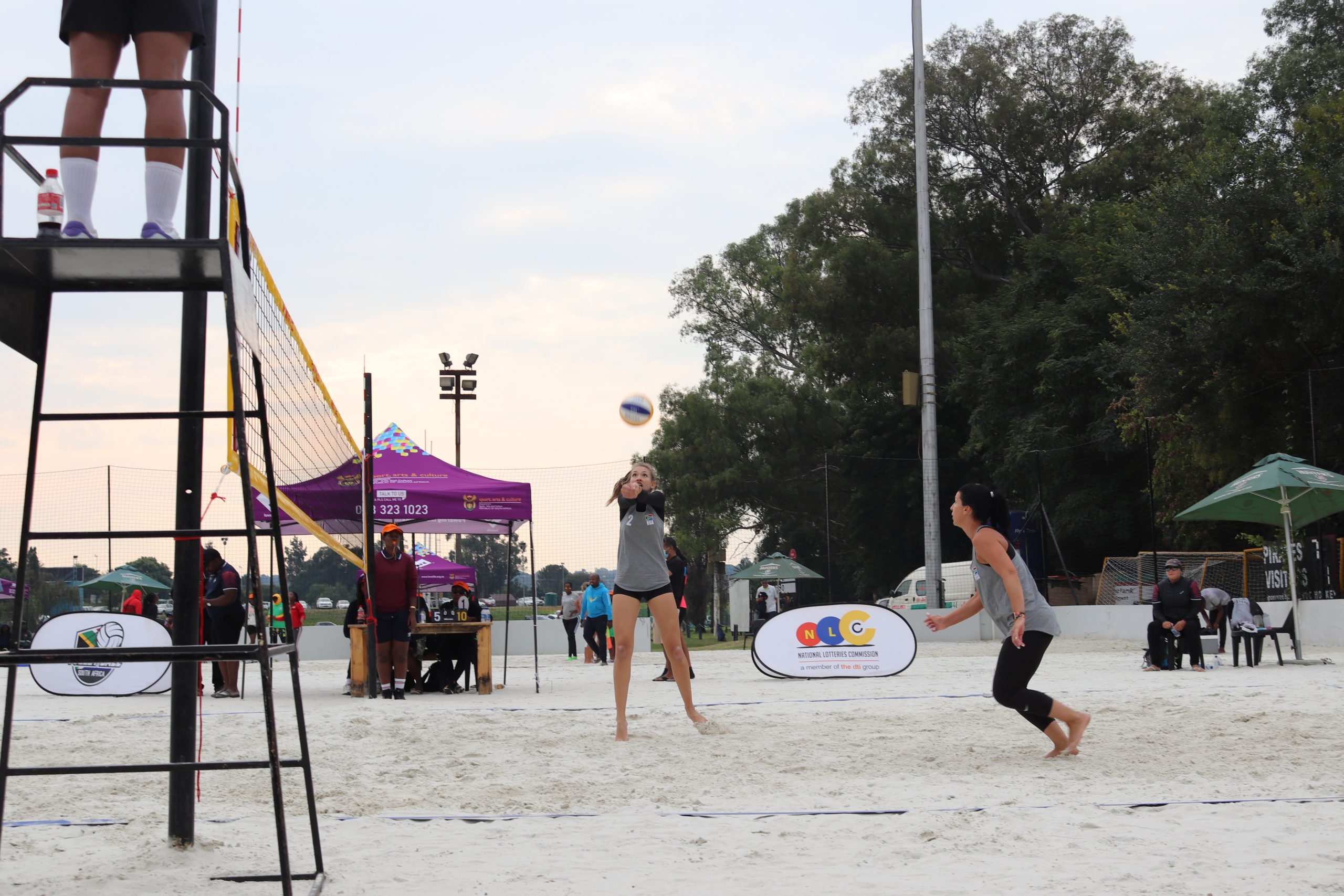 Fans who rocked up at the Pirates Beach Arena in Greenside, Johannesburg were thoroughly entertained with the high quality of volleyball on display from teams that opted to throw caution to the wind to make it into the semi-final stages of the 2nd Leg of the Zone VI Beach Volleyball Tour.

While the fans savoured every power attack and well executed blocking in all the encounters in which a loss will mean that the loser exits the tournament ,the South African fans were however disappointed that only one team from South Africa will be in the semi-final clashes.

Meanwhile Mozambique’s fiery display on court in the round robin stage earned them the respect of their opponents as teams that were on a mission to reach the podium as medallists. Given the high quality of their offensive play Mozambique bagged 5 of the 8 places on offer in the knock out quarter final stages in both the women and men’s categories.

In an all South African quarter final clash involving Karina and Tatiana against Malia and Samkelo it was the former pairing that effortlessly cruised past the hapless pairing of Malia and Samkelo who seemingly had nothing much to offer as resistance to their opponents.

Playing a more skilful game in which the duo mixed deft touches into open spaces in their opponents’ court to clinical power attacks Karina and Tatiana sealed proceedings with a 21-15; 21-13 score line  to book their place in the semi-finals.

The women’s final quarter final match between Vanessa and Ana Paula from Mozambique against the Zimbabwean pairing of Levenia and Progress ended up as a ‘’bloodbath’’ as the Mozambican ladies mercilessly demolished their counterparts from Zimbabwe by posting an embarrassingly low 21-6; 21-6 score line to march into the semi-final stage.

In the men’s quarter final clashes the Mozambicans showed their dominance by winning 2 places in the semi-final stages. It is apparent by watching the teams from Mozambique that they spend many hours honing their skills on the beach.

South Africa hopes of reaching the semi-final stages in the men’s category rested on the broad shoulders of the quick hitting Ofentse Jonas Motlhobi and his partner Ntumbu. While their opponents Jose and Osvaldo from Mozambique displayed ease and confidence in their game they however had to fight all the way to defeat the South Africans by posting a win with a 21-18; 21-16 margin.

In his communique to the media and the teams the Zone VI President, Khalid Cassam announced the semi-final matches that will begin from 9:00 on Sunday, 3 April 2022.