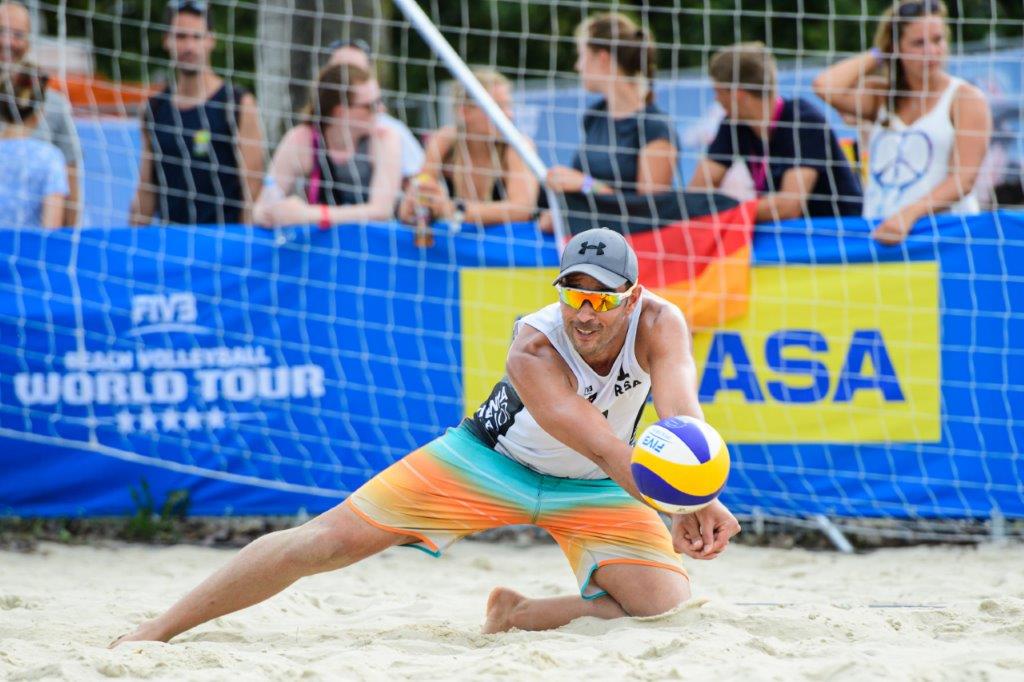 Johannesburg – SA’s Beach Volleyball Olympian Grant Goldschmidt says South Africa still stands a good chance of qualifying to participate at the Tokyo Olympics even though the SA team is expected to perform at their peak. Most African countries have been investing in Beach Volleyball recently which makes the competition a bit tougher.

The 37 year-old SA beach legend further expressed that although athletes are facing difficult situation caused by the pandemic of not getting enough game time for preparations, SA still has experienced players who can take the country to the Olympics.  Grant is from Cape Town in the Western Cape Province, and he started playing volleyball at the age of 12 at Princeton High School, situated at Mitchell’s Plain.

The SA indoor and beach volleyball superstar recorded a number of accolades at the All Africa Games, Continental Cup and attained the Best Attacker Award at the World League Qualifiers. Goldschmidt is not planning to retire anytime soon and his lifetime achievement was when he made it to the 2012 London Olympics where he represented South Africa with his partner, Freedom Chiya. They displayed an outstanding performance even though the duo did not break the existing South African record set by the partnership of Gershon Rorich and Colin Pocock who finished on position 9 at the 2004 Athens Olympics.

The Olympic competition remains the most prestigious world event where all the top-performing stars from all the corners of the world meet and battle against each other, and the stage which every player dreams to participate in.

The Volleyball South Africa’s Media and PR Director Jacob Thamaga asked him a few questions and this is how the talk has unfolded:

1. When did you start playing Volleyball and what were your greatest Volleyball highlights?

I started playing Volleyball in 1996. I attended Princeton High in Mitchell’s Plain and my first year in high school some of my classmates convinced me to try out the Volleyball team after school and I really enjoyed it, so I stuck with it. There are so many great highlights but the most highlight will be competing at the 2012 Olympics which is every athlete’s dream.

2. You are one of the Volleyball legends and you have recorded a lot of accolades. Which strategies have you applied to be at that level?

I am guided by these values and principles; respect, honesty, fair-play, integrity, hard work, sacrifice, good habits, etc. Opponent analysis was always my strength in beach volleyball and it assisted in terms of my game plan. The knowledge that I have prepared well helps me stay relaxed, confident and composed. I am always looking for ways to support and encourage my partners, instead of criticizing them thus gives them the best chances of playing well. This has allowed us some wins even when we were not playing well.

3. SA Beach Volleyball is on a campaign for Tokyo Olympics Qualification. Do you think SA will make it to the Olympics this time?

In short yes, but this is a complex question as the environment is very complicated. Firstly, many more countries in Africa are investing heavily in their beach teams so the competition has increased over the last years. Secondly, it is not easy playing in Africa with so many challenges and factors to overcome. We also have less competitions than before and now with the COVID-19 pandemic it makes it difficult for players to keep their skill level up. Even with these challenges I think we have enough expertise to adapt and come up with good strategies to win the Continental Cup and qualify for the Games.

4. When are you planning to retire and what are your future plans after retiring from playing?

I have actually not thought about retirement yet. Currently, with no competitions, I plan to take a short timeout as my wife and I are expecting our first child and I need to be there for them. Hopefully when things pick up again and there are some opportunities to compete I will get back in the sand.  I plan to go into coaching or any aspect where I can contribute to the sport, after competing . I lecture on Coaching Science at Eta College and also do part-time coaching so that’s a good start.

He started playing Volleyball in 1996 and recorded the below indoor and Beach Volleyball accolades: