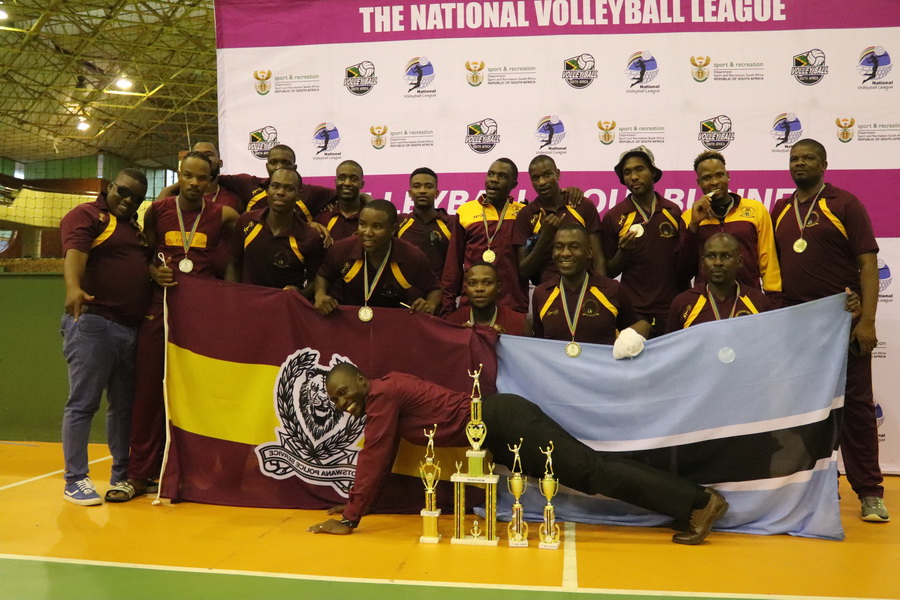 The men’s final between Botswana’s Police V1 and UZ Wolves from Zimbabwe was a real humdinger as both teams exhibited their penchant for a total onslaught strategy in their respective offensive and defence strategies , a spectacle unseen on the South African volleyball courts. The South African fans in particular were awe struck with the kind of “brutality” dished out by the attackers on each others’ defence at the net to score quick points.

With both teams pulling out all the stops the stage was set for a titanic struggle that had the fans lapping up the excitement and yearned for more.
The closely contested explosive first set tipped in favour of the very tall Police team as they used their height advantage to post a hard fought 18-13 lead through sheer power from Alec Engleton and Siphambe Moemedi. Efforts from Wolves power hitters, Keith Machakaire and skipper Keni Tafadzwa could not prevent Police V1 from posting a 25-17 first set win.

The 2nd set brought out the best from blockers from both teams, at times blockers executed a one on block which brought on loud applause from the fans. Starting off the blocking frenzy was Happy Ribbin from Police who stopped Keith Machakaire with his huge out stretched hands that forced the ball back to the Zimbabwean’s feet with
“rocket speed”. Ribbin received the best blocker of the tournament award.
Police’s 7-4 lead was cut short when Wolves came back into contention by levelling matters at 10-10. Their determination to upset their opponents paid off as they patiently built up a lead. At 24-20 Wolves rejoiced when Police V1’s Jack Sekao’s powerful attack failed to cross the net. Wolves levelled matters (1-1) by winning the 2nd set by a 25-20 margin.
Putting aside their 2nd set defeat to UZ Wolves the Botswana lads turned on the magic with power attacks and crucial blocking that stunned their opponents to the extent that they collapsed to a 25-12 hammering despite desperate attempts to get back into contention which was encouraged all the way by their fans.

Leading by 2 sets to 1 Police V1 entered the court in the crucial 4th set determined to close proceeding in the quickest possible way to become the tournament’s gold medallists.
However Police did not have it their own way as the Zimbabwean team challenged them “toe to toe” in attack and block that created great tension on the stands as rival fans got in on the action encouraging their favourite teams. The hall marks of the set was the powerful attacks unleashed by both teams and the blocking skills of the men at the net.

“The tension was too unbearable for us,” said a Zimbabwean fan as the score board was kept ticking evenly from 6-6 to a 23-23 points score line. In a seemingly pressure cooker situation Wolves’ Terrance Chapingidza latched on to a hurried set and spiked it with enormous power which struck the top band of the net and crash landed on to his side of the court. Police were given a gift to lead by a 24-23 margin. Police went on to wrap up the set with a hard fought 25-23 score and a 3 sets to 1 match victory to become the tournament’s gold medallists.