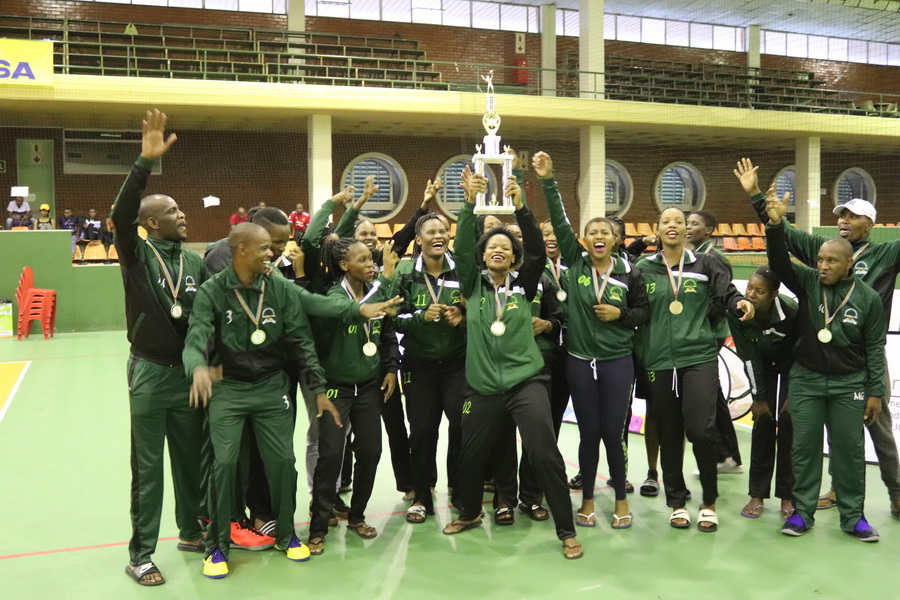 From the outset both teams enjoyed great crowd support as they made every effort to put hard fought points on the board on their way to the podium as the tournament’s gold medallists.

In the opening set with the score at 13-8 in favour of Universidade Pedagogica Nampula (UPN), the Mozambiquean outfit displayed a greater determination to wrap up the set with an aggressive attacking strategy that would put them in pole position to take a 1-0 lead.
Much to Correctional Sunrise dismay a series of faulty services became a hiccup that troubled the eSwatini team who went on to succumb to a 25-10 first set thrashing.

With both teams falling foul to poor services , the score board was kept ticking evenly. When the scores were tied at 12-12, Correctional Sunrise stepped up a gear, albeit during explosive encounters from both sides to take a 19-15 lead. UPN slowly chipped away at their opponents’ lead through tireless efforts by Ana Sinaportar, the recipient of the tournament’s Most Valuable Player (MVP) award and power attacker Vanessa Mlanga.

Eyes brows were raised in the eSwatini camp when the Mozambique side levelled matters at 21-21. At this stage UPN setter , Ancha Mutbquia’s quick set to the antenna was met perfectly by skipper Ahfasha Baptista whose left hand down the line scorcher drifted slightly off the side line that gave Sunrise a slender 21-20 lead. Philile Kwathwane, the eSwatini team’s left handed attacker was a constant thorn in her opponents’ side because of her ability to strike the down the line and the cross spikes with equal potency. Philile picked up two points on the trot to take a 23 -21 lead. At 24-22 a well co-ordinated block by Sunrise blockers, Philile Kwathwane and Nokulunga Kunene on UPN’s Ahfasha Baptista sealed the set for Sunrise with a 25-22 score line.The scores were levelled at 1-1.

After taking an effortless 7-3 lead in the 3rd set Correctional Sunrise failed to build on the lead to take a commanding 2 sets to 1 lead. APN play maker, Ancha Mutbquia, the tournament’s Best Setter reignited her attack force with Ana Sinaportar spearheading the offensive play to grab the set with a 25-19 margin to lead by 2 sets to 1 in a best of 5 sets final.

With a 17-11 lead in the crucial 4th set it seemed like the Mozambiquean outfit will head to the podium as gold medallists. However things went pear shaped for UPN in a pressure situation that they suddenly found themselves which resulted in a series of silly costly mistakes. At this point in her efforts to take the eSwatini ladies by surprise Vanessa Mulanga fired consecutive attacks out of bounds that brought Sunrise a point behind UPN (23-22). An ace service by Sunrise levelled the score at 23-23 and there after 24-24.
A nail in the coffin for UPN was when Cecilia Satio served the ball out which gave Sunrise a 25-24 lead which they converted in style with a blistering attack to win by a heart stopping 26-24 score line. The scores were levelled at 2-2.

Starting the deciding 5th set on a cautious note both teams did not want to commit unforced errors which plagued them from time to time. At a throw of a dice UPN threw caution to the wind and upped their game to change sides at 8-4. Desperate attempts to turn the tables on their high riding opponents from Mozambique, Sunrise managed to close the points gap to 10-11.With what seemed like stage fright Sunrise attacker, Nonlanga Khoza committed consecutive attacking errors that put UPN in a commanding position to win the contest. With the fans firmly behind their favourite teams it spurred on the players to unleash attack after attack that prompted vociferous crowd support.
The score was levelled at 13-13

Constant cheering and whistling from the crowd seemed to have taken its toll on UPN’s power attacker, Ana Sinaportar who latched on to a quick set with such enormous power that the spike pounded a mere centimetre or two outside the base line.. Correctional Sunrise players raised their hands and heads high up in gratitude as they were handed a nervous 14-13 lead.

All “hell” broke loose when Correctional Sunrise’s Nokulunga Kunene unleashed an unstoppable down the line spike to win the encounter by a 15-13 margin.
In a flash eSwatini supporters and men’s team players invaded the court and joined in the celebrations with song and dance and loud cheering from time to time to announce that the ladies had become the tournament’s gold medallists

“What a remarkable achievement for country that has a population of approximately
1, 4 million people to have a team emerge as the winners of a Zonal club championship,” said one of the tournament officials.