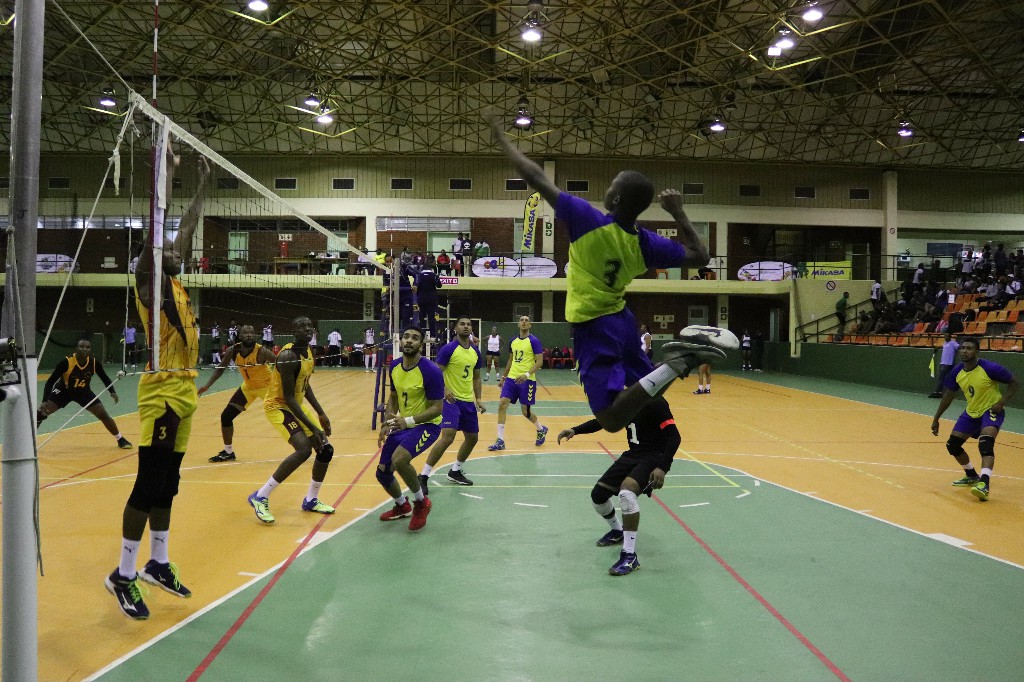 Liberte’s chances of making it to the top of Pool D of the 2018 African Zone V1 Club Championship presently under way at UKZN’s Westville Campus Sports Centre were crushed when they lost to Police V1 from Botswana by 3 sets to 1. Police V1 are arguably the tallest men’s team at the championship.

Taking a quick 6-1 lead in the opening set Police V1 stamped their authority on the match with power attacks and solid blocking by their very tall and strongly built players.
Liberte gained ground on the Botswana rivals as they closed the gap through efforts from Yuvir Ramjit, Truman Xulu and the quick hitting middle attacker, Loueshan Gangarajh. Liberte levelled matters at 9-9.

Taking the lead at 16-12 Liberte suffered several set backs because of poor service that either failed to cross the net or floated out of bounds. Despite these unnecessary hiccups Liberte fans rejoiced when their team closed proceeding by winning the set by a 25-22 margin when Gangarajh slammed a quick set off Ardel Shaik Ally’s fingers.

Liberte’s Mickesh Rampersad, well known for his trade mark, “pumping hand action” celebrating a point was out of his depths as he was repeated blocked , handing valuable points to the opposition. One wonders why coach Jason Govender did not substitute him at this stage. Rampersad was also costly committing many service errors.
Nevertheless Liberte had moments of “magic” on court during rallies which they won or as in one instance a solid one on one block by Ardel Shaik Ally on Police’s 2m tall Jack Seku that brought loud cheers from the spectators.

Taking a 18-14 lead Liberte were poised for a 2nd set victory. Unfortunately the Police V1 attack force had other plans as they were merciless in attack to level matters at 21-21. Concentrating on executing huge blocks at this crucial point paid off for the Botswana lads as they crept to a 24-23 lead that seemed to have had an unnerving effect on the Liberte players as evidenced by Yuvir Ramjit’s service floating out of bounds to hand the opposition a hard fought 25-23 win to level the scores at 1-1.

Despite facing a rampant Police V1 team that was determined to close matters as quickly as possible Liberte stood firm although they struggled from time to time to contain their opponents big attackers, Happy Ribbin, Jack Seku and Lebogang Majole.
Liberte’s failure to stop a “freeway” of attacks from the wings resulted in Liberte falling behind by a 18-22 margin. Police V1 had no intention of letting Liberte back into contention as their attackers raced to a 25-22 win.

In the crucial 4th set that was closely contested up to 8-8 points, Liberte fell foul to being pushed onto a ‘ slippery slope” that plunged them into a state of disarray. The result was devastating as they lost the set by a 25-18 score line and the match by 3 sets to 1.
Liberte will square up to Mozambique’s Autoridade Tributaria in today’s (Wednesday) quarter finals.