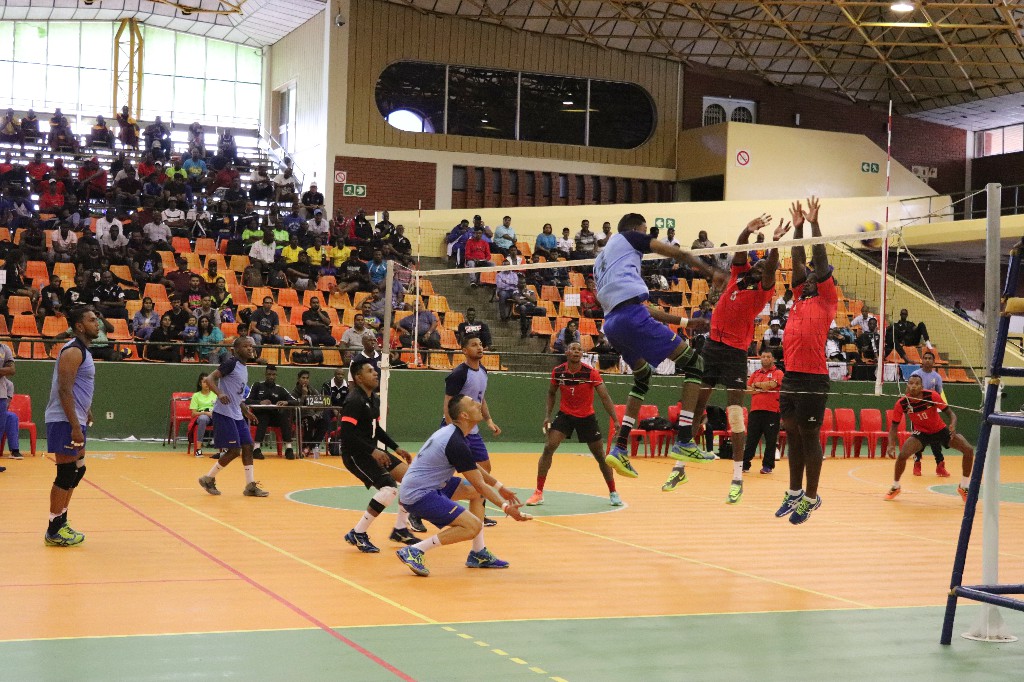 The only South African team to survive the gruelling round robin stage of the 2018 African Zone V1 Club Championship entered the quarter finals as Pool D’s runners up.

They squared up against Mozambique’s Autoridade Tributaria for a place in the semi finals scheduled for Thursday at UKZN’s Westville Campus Sports Centre.

From time to time  Autoridade’s powerful attackers, Martino Vale,  Chinai Firnimo and Simione Mpanda kept their hopes alive by posting telling “body blows” to pick points to level the scores at 17-17. The usual culprits in the Liberte team gave valuable points away through  faulty service or net touches. Unable to contain the Mozambiquean  power driven back court attacks edged Autoridade closer to victory at 24-23. A  net touch by a Liberte blocker handed the set to the team from Mozambique by a 25-23 margin.

Once again it was up to middle attacker, Yuvir Ramjit to give Liberte a lead in the 2nd set when ever he connected with  Ardel Shaik Ally’s crafty setting. Diminutive power attacker, Truman Xulu was a crowd favourite every time he blasted his way past the opposition blockers. With Loueshan pitching in with his trade mark explosive middle attacks Liberte posted a 25-21 score to level the match at 1-1.

Every time Liberte’s Mickesh Rampersad was guilty of poor service or blasting the spike out of bounds it exasperated the fans and put a damper on the team. However on a more positive note Rampersad did add to the team’s tally with his powerful attacking but unfortunately they did not out weigh the many faults he committed.

Once again setter Shaik Ally had to turn to Ramjit and Gangaraj to rescue the team from falling behind through careless mistakes. Liberte’s “busy body” libero, Eshalan Chettiar did not put a foot wrong through out the tournament throwing his body on the line for his club.

The rallies excited the crowd who showed their appreciation by loud cheering.

A great pick up from a rally by libero Chettiar to setter Shaik Ally was directed  quickly to Rampersad who blasted his way past the huge blockers to record a hard fought 25-23 score to take a 2 – 1 lead.

Liberte seemed to have  being caught off guard as the  Mozambiquean attack force piled on the pressure picking up quick points to lead by a 19-10 margin. At this stage the set belonged to Autoridade Tributaria who went on to hammer their way to a 25-12 win to level matters at 2-2 and force the match into a deciding 5th set.

In the 5th set Liberte were on a winning path with their attack force keeping abreast of their opponents. The home team changed sides at a commanding 8-6 giving hope to their fans of an imminent victory. Once again Autoridade’s back court powerful attacks troubled Liberte who saw their opponents level the scores at 10-10.. Yuvir Ramjit’s quick middle attack pushed the score to 11-10. When Simione Mpanda stepped up to serve it signalled the end of Liberte’s pursuit to glory.

Through Mpanda’s “rocket service” Autoridade  stretched their lead to 13-11. Mickesh Rampersad’s booming attack zoomed out of bounds, much to the joy of the opposition supporters. Rampersad was substituted at this late stage.

At 14-11 skipper Hinesh Purbhoo , seemingly under pressure spiked the ball into the net. The Mozambiquean players displayed their joy by dancing and singing on court.