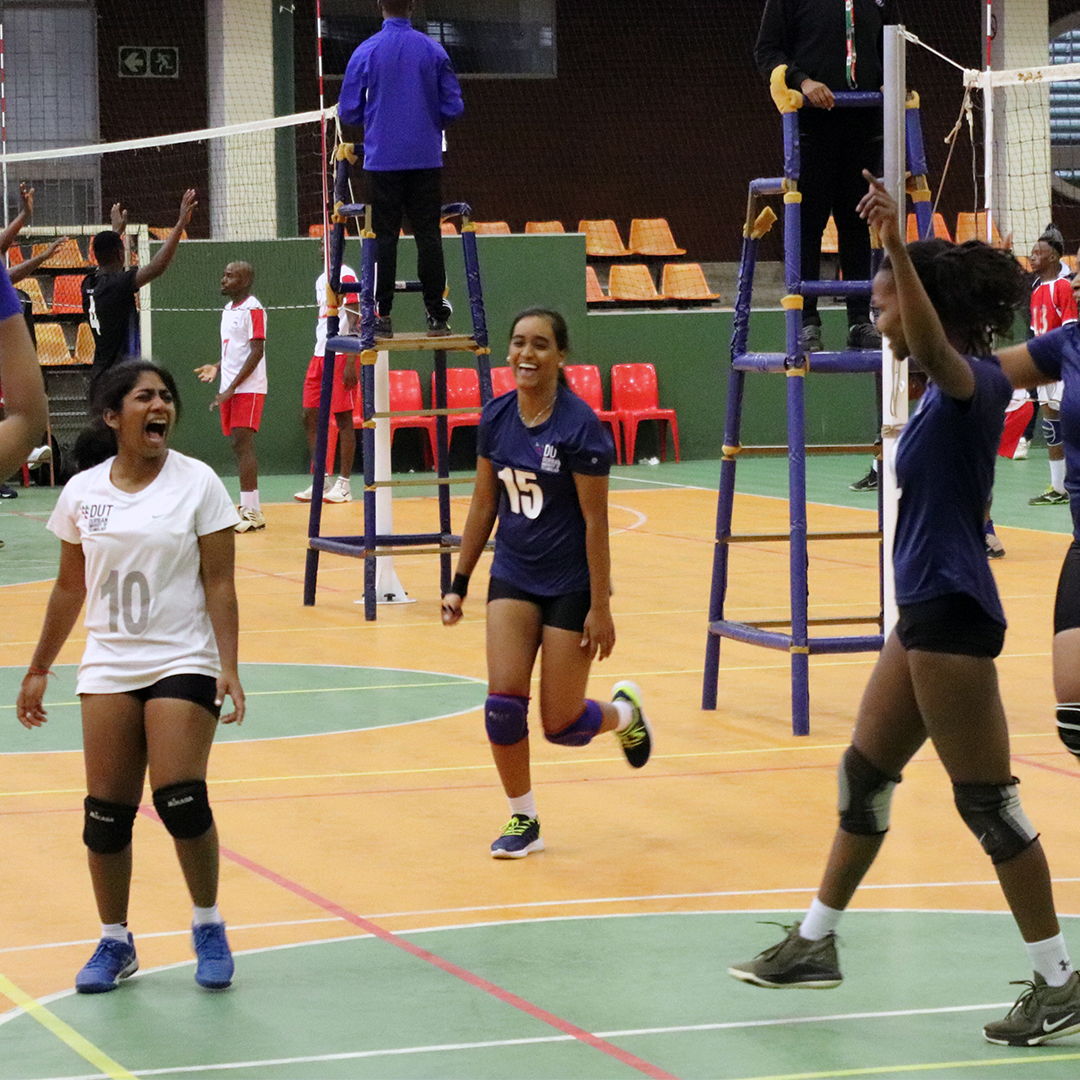 The inaugural R100 000 Tubby Reddy Classic ended on a high note at the University of Kwa Zulu Natal’s Westville Campus Sport Centre with two under dogs emerging as winners and pocketing a staggering R20 000 each for their sterling efforts.

In the women’s final KZN’s top team, DUT had only themselves to blame for allowing the gold medal match against TUKS from Pretoria slip threw their fingers after having posted a confident 25-19 first set win. They went on to lose the next three sets narrowly,

The opening set of the men’s final was a mouth watering encounter with both teams throwing caution to the wind and challenging their respective blockers with awe inspiring power attacks. The ensuing battle at the net excited the fans who demonstrated their appreciation  with thunderous applause.

When Liberte reached the score line of 23-20 the fans expected them to close proceedings However things panned out differently when Liberte’s “big attackers” became complacent losing four points on the trot. Captain, Hinesh Purbhoo, Loueshan Gungarajh and Mikesh Rampersad were the chief culprits in this instance. On the other hand Maidstone picked up the pace of the game with fiery attacking from Hansen Viragavan and Sandile Khoza.

At 26-26 the set would have gone either. Liberte’s quiet and unassuming Yuvir Ramjit pushed the score to 27-26 when he played his trade mark quick middle attack. Maidstone’s mercurial player, Ryan Lahldas caught the Liberte players napping with a well disguised “dump” to level the scores at 27-27. When Liberte’s skipper Hinesh Purbhoo fired a down the line spike out of bounds the situation became precarious for the Tongaat team.

With nerves of steel Maidstone clinched the nail biting set with a heart stopping 29-27 score line.

When Maidstone took a 8-7 lead in the 2nd set, Liberte coach brought on veteran setter, Kiresh Hiralal  to replace youngster Ardel Shaikally. Drawing on his years of experience in such tight situations Hiralal “steadied the ship” and brought Liberte back into contention by winning set by a slender 25-23 margin. Sparkling performances by Liberte’s middle attackers, Yuvir Ramjit and Kiveshan Bhagwandeen kept the Tongaat lads in pole position to win the match.

While Liberte’s Mikesh Rampursad was in sparkling form unleashing attack after attack in the 3rd set, striking fear in the hearts of his opposition, up stepped Maidstones’ Hansen Viragavan, Sandile Khoza and Leon Maistry who went on to level matters at 19-19.

When play maker Ryan Lahldas turned to attackers Viragavan and Khoza with well disguised quick sets to the antenna the duo responded with venom and closed the set with a 25-21 margin.

Gungarajh, Trueman  Xulu, Yuvir Ramjit and the hard hitting Mikesh Rampursad piled on the pressure to thrash Maidstone by a 25-14 score line and level the scores at 2-2 and force the match to a deciding 5th set.

However one would have expected Liberte to continue with where they left off in the 4th set and keep Maidstone on the back foot with their strength at the net coupled with power attacks while they raced to close the encounter.  Refusing to roll over and play dead in the face of Liberte’s rampant attack force  Maidstone quickly regrouped allowing setter Lahldas to have a field day servicing his attack force with sublime setting. Once again Hansen Viragavan and Sandile Khoza became a handful for Libete’s defence at the net as they wrapped up proceedings with a 15-10 score to pick up the R20 000 prize money.

Both teams qualify to represent South Africa at the Zone V1 Inter Club championship taking place at UKZN in December this year.