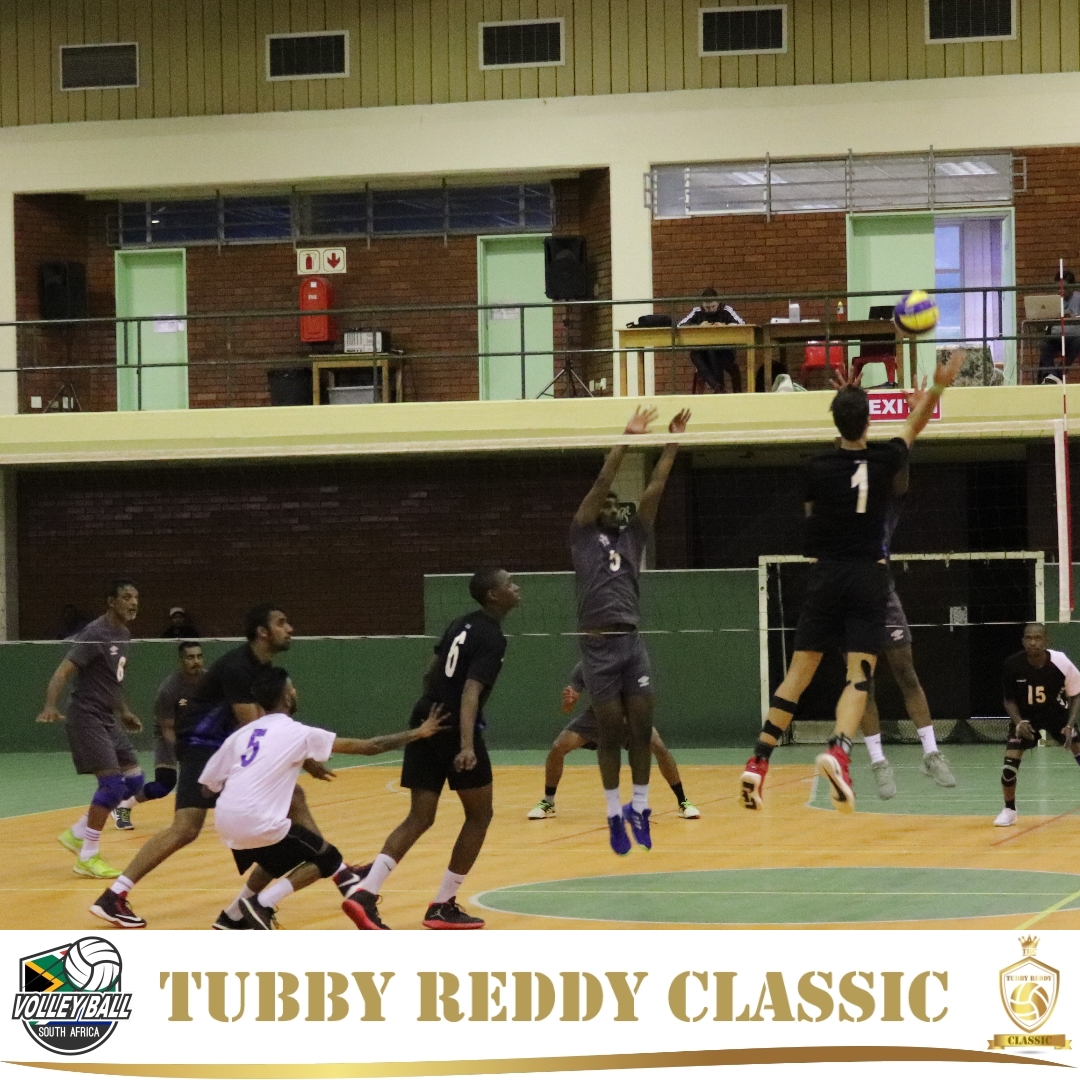 The Tubby Reddy Classic reached the business of the inaugural event on Day 2 with tightly contested semi final matches entertaining the fans with sparkling displays of action packed volleyball by each team to get into the final of the richest inter club championship for women and men in the country.

In the 1st women’s semi-final clash between Pretoria based Tuks and UKZN the former cruised passed the Durban team in straight sets (25-14; 25-14; 25-17) to reach Saturday’s final. For Tuks it was setter Natasha Webber who made sure that her attackers were serviced well to keep the pressure on the UKZN blockers and cover players and keep the score board ticking.

With the lanky Margrit Springer taking care of matters at the net, Webber unleashed veteran attacker Kirsten Pocock on the UKZN blockers. The duo put valuable points on the board and streaked ahead of UKZN.

On the other hand for UKZN, Reyanka Kisten sparkled as an attacker but Kisten needed other team mates to come to the party to put the high riding Tuks against the ropes and out of the competition.

Sadly for UKZN they did not have the fire power or strength at the net to upset Pretoria’s Tuks who galloped ahead to a straight sets victory.

In the 2nd women’s semi-final clash KZN’s DUT were made to fight all the way to win the encounter against Panthers of the Free State (25-21; 25-19; 25-17) to set themselves up against Tuks in the final of the Tubby Reddy Classic on Saturday.
Dubbed as the “dark horses” of the tournament, Panthers started the opening set determined to make it to a national final for the very first time.

With “home turf” advantage and vociferous crowd support DUT took a slender lead with Panthers hard on their heels. Although DUT were guilty of far too many service errors they managed to win the first set by a hard fought 25-21 margin. Buhle Khuzwayo and Yasmin Rajak’s sterling performances denied the Free State team of an upset victory.
DUT went on to clinch the next two sets by a 25-19; 25-17 score line.

“Giant killers” Maidstone of Tongaat who defeated tournament favourites, Liberte by 3 sets to 1 in the group stage were oozing with confidence when they faced UKZN in the first men’s semi-final clash of the Tubby Reddy Classic. Fans who watched the clash could have easily mistaken it for a final because of the explosive nature of the encounter.

Although UKZN lost the opening set by a low 25-14 margin, the set was not a walk in the park for Maidstone. UKZN turned on their magic in the 2nd set by taking the fight to Maidstone and winning the set by a 25-20 score line.
For the loud cheering fans at one set all (1-1) the encounter could have tipped in favour of either team.

Had it not been for the sheer brilliance of Maidstone’s veteran setter, Ryaan “ Spitz” Lahldas UKZN could have booked their place. in Saturday’s final. Lahldas’ variety in attacking options gave his attackers the freedom to put the encounter beyond UKZN. Maidstone won the 3rd and 4th sets with a heart stopping 26-24; 25-23 score line to make it to the inaugural TRC final.

In the 2nd men’s semi – final match Limpopo’s Kamplits who marched to the top of Group B of the Tubby Reddy Classic squared up against Liberte, Group A’s 2nd placed team at UKZN’s Westville Campus Sports Centre on Friday.

Putting aside their loss in the group stage against Maidstone, Liberte started the match with determination to reach Saturday’s final. Kamplits were difficult opponents as their “big hitters” were merciless when ever they connected with their setter. The first set could have gone either way had it not been for Liberte’s attackers’ persistent efforts to win the encounter.

The hard fought first set was snatched by Liberte by a nail biting 25-23 margin.
With the crowd applauding every block and spike the match became a thrill a minute encounter. Liberte went on to win the next two sets by a 25-17; 25-22 score line to meet Maidstone, their arch enemy in what will be billed as a “revenge final’ on Saturday.