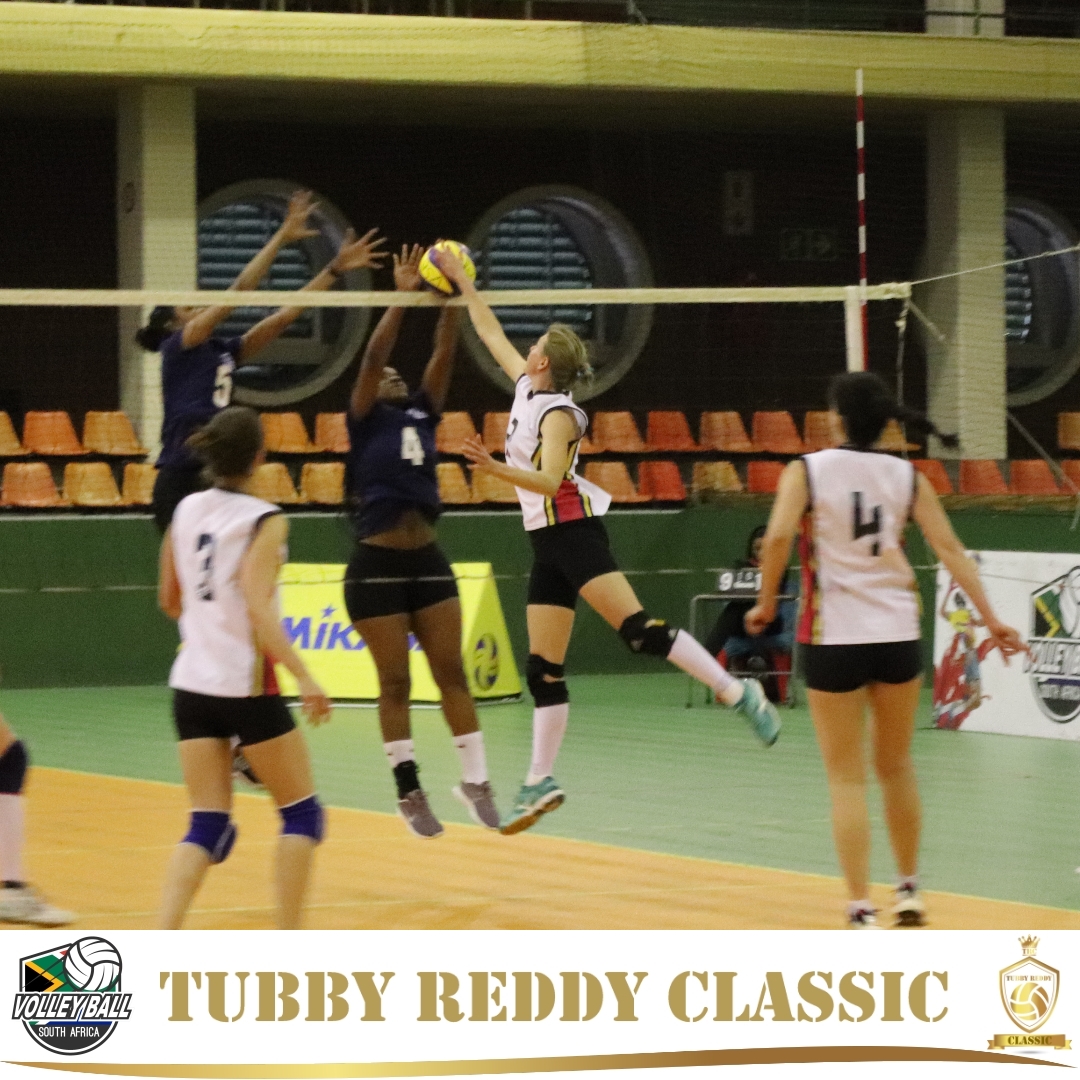 KZN’s top women’s team, the Durban University of Technology (DUT) were quick to exploit the shaky start of TUKS, their opponents from Pretoria by racing to a 16-9 lead in double quick time in inaugural Tubby Reddy Classic staged at the University of Kwa Zulu Natal’s Westville Campus Sports Centre. When DUT reached 20-14 courtesy of fine performances from Bughe Khuzwayo, Yasmin Rajak and Silindile Mkhize the death knell was seemingly  struck for the Pretoria team. DUT won the set by a 25-19 margin.

Falling foul to a series of unforced errors DUT were forced onto the back foot at 7-12 while Tuks’ Margrit Springer, Kirsten Pocock and Nicola Weinhold kept their team ahead on points with clinical finishing at the net. Not to be out done though DUT bounced back and levelled matters at 16-16 much to Tuks’ frustration. Urged on by their supporters Tuks took a 21-18 lead through powerful attacking from Springer and Pocock. Tuks went on to clinch the set by a 25-18 margin that put a spring in their heels to do battle in the next set.

The explosive 3rd set had the crowd on their on feet urging on their favourite team every time a spike hit the floor or spiralled out of bounds off a blockers’ out stretched hands. The appreciative fans brought the best out of the players as they fought toe to toe hoping to win quick points to seal the encounter. The ensuing battle at the net and the dashing runs to recover balls that came of the blocks excited the fans who stamped their feet, clapped their hands  and whistled loudly. The players responded by “going for the kill” every time they connected with their respective setters.

The 4th set was crucial for DUT as losing at this stage was not an option for the home side.

Once again the set became tightly contested as the teams posted points on the board at an even pace. When the scores were locked at 20 -20 it was a blistering performance from Tuks skipper, Margrit Springer that kept her team’s hopes alive in the set. Had it not been for Springer’s quick fire attacking every time  play maker Natasha Webber serviced her with the quicker set, Tuks would have been crest fallen and bundled out of the match.

There after a solid block on DUT’s Buhle Khuzwayo sent Tuks in to a frenzy as they raced around the court hugging one another in celebrating their nail biting 28-26 victory.

They will join DUT as South Africa’s representatives at the African Zone V1 Inter Club Championship scheduled to take place at UKZN in December this year.