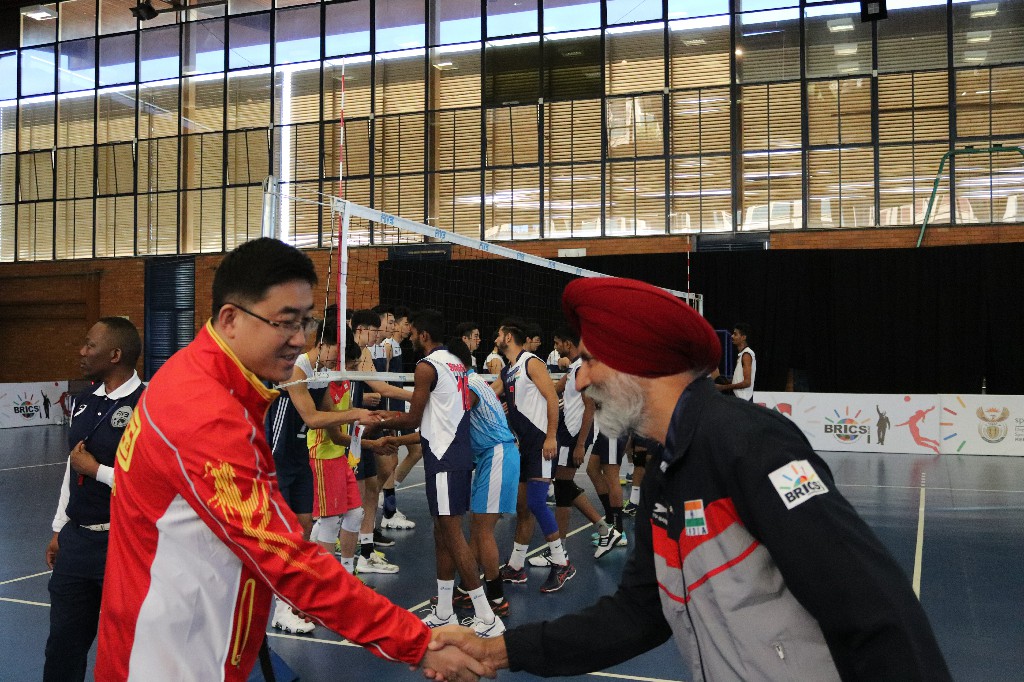 Rivals India and China, fierce competitors in Asian continental competitions pulled out all the stops to thrill and entertain the local fans with their unique brand of power volleyball.

The opening minutes of the first set became a contest between the two setters, India’s Muthu Samy and his Chinese counterpart, Cui Ker Rui. Both had powerful attackers to service but it all came down to choosing the right pass and the right attacking option to put points on the board.

With India’s Amit and China’s Jiawei Hu in devastating form the score board was kept ticking evenly. Power attacking and attempts to put up solid blocks were the order of the day. Fans were particularly delighted with attacking from all round the court. Spectators were unaware at times which attacker the setter will choose to service to beat the opposition blockers and score much needed points.

Joining Amit in attack were middle attacker Jatin Singh who used his 2m tall frame to great advantage and Rohit Kumar, whose jump services were most devastating.
Chinese skipper, Jiawei Hu spearheaded his team’s attack, ably assisted by Tao Zi Yuan and Zhang Xin Yi who kept China in the lead. India’s Amit, a toast of the local fans brought loud cheering whenever he latched onto setter Muthu Samy’s quick sets to fire home points. Not to be out done the Chinese attackers who did not hesitate “to pull the trigger” took a two point lead from a 19-19 deadlock to 21-19., Amit

Poor service reception often put a damper on the Indian attack as setter Muthu Samy could not be creative with a poor pass. China picked up their pace during moments of disarray in the Indian back court and put the set beyond the reach of their opponents with a 25-21 score line.

Power play was the order of the day in the 2nd set with the fans lapping up the intensity of the struggle that ensued on court. With the score at 10-10 up stepped India’s power machine Amit who went on to score valuable points to keep India in the lead. With Rohit Kumar pitching in with his trade mark bullet services the stage was set for an Indian win in the set.

Taking advantage of India’s wing blocks the Chinese closed the points gap by narrowing it to 17-15. The struggle continued between both teams much to the delight of the fans as the score board ticked evenly.

However at 24-23 India’s prolific attacker, Amit stepped up and pound a cross court bullet attack to wrap the set by a 25-23 margin that levelled matters at 1-1.

China’s strength was their potent combination attack in the middle which yielded them valuable points. Jiang Zhon Yung and Lin Hai Kun being China’s chief destroyers.

When India beefed up their defence at the net it slowed down China’s points scoring. Unfazed by India’s efforts to keep them out, Chinese captain was merciless in attack whenever he latched onto play maker Cui Ker Rui sets.

Spurred on by shouts of “ India India” from the stands the Indians kept the rampant Chinese attackers at bay not allowing them to take a run away lead by concentrating on their defence at the net.

However when ever the Chinese attackers found a way to beat the Indian blockers they exploited it to the fullest. With both teams going on a full offensive strategy the crowd joined in with loud cheering. Trailing 16-21 India was “on fire” as Amit , Rohit Kumar and Vinod narrowed the gap to 22-23. Reverting to their quick combination attack in the middle the Chinese romped home with a 25-22 score to level the sets at 2-2

The high energy deciding 5th set was a sheer delight to watch as both teams threw caution to the wind and took on their respective opponents blockers at the net. Power rallies excited the fans as the score board was kept ticking. India suffered a set back when poor passing from the back court and committing far too many net touches saw them lag behind the high riding Chinese outfit. At 13-10 Chinese skipper Jiawei Hu cleverly played the Indian wing blocks to “steal” soft points in a high energy encounter.