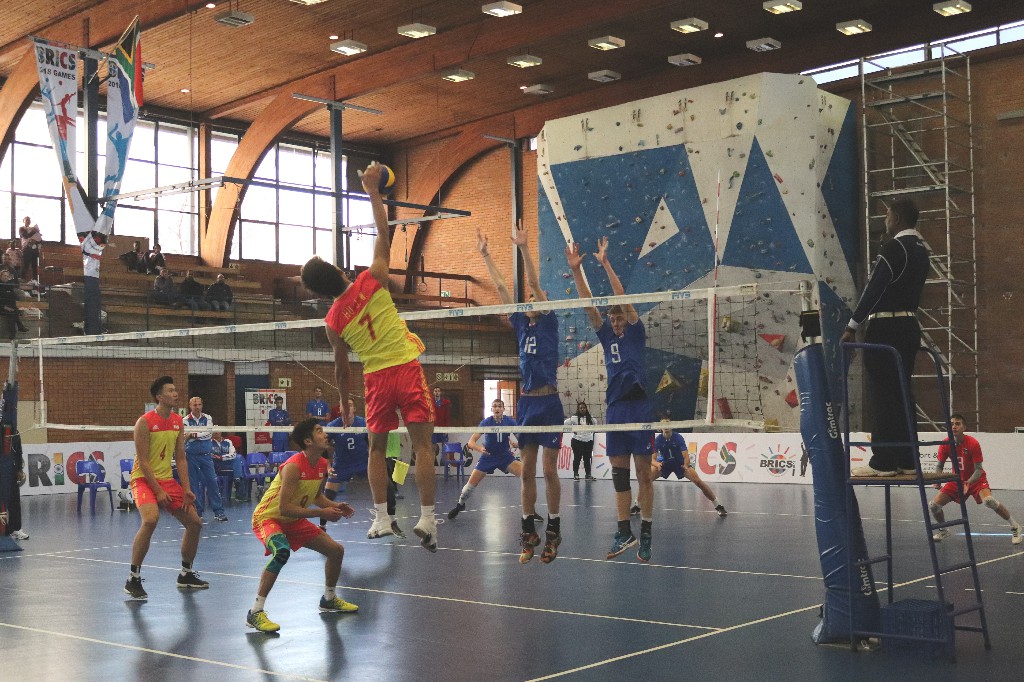 The five (5) set thriller between favourites Russia and India on the opening day of the 2018 BRICS GAMES held at Wits University’s Old Mutual Sports Hall paved the way for yet another thrilling five set encounter when Russia met Asians giants China on Friday, 20 July.

Fans were still recovering from witnessing awesome power volleyball in the Russia versus India match and were delighted when Russia and China went toe to toe displaying their technical superiority, craftiness in running combination plays and always never afraid to

“blast the bladder out of the ball” type power-offensive play.

Fans sat awe struck as both teams kept the score board ticking with power attacking, deft touches into open spaces, agility on court to pick up balls that came of the block and solid blocking that from time to time denied attackers from going past them.

The Chinese were the first to draw blood as quick middle attacker, Jiang Zhon Yung grounded the ball with power that left the Russian blockers stranded. Russia’s “go to” attacker, the tall and strongly built Klets sent a reminder to the Chinese that he was going to be a thorn in their sides as he pounded attack after attack as the Russians levelled matters at 17-17. The tightly contested set drew loud cheers from the fans, applauding every attack, block and recovery of balls that were directed into unguarded territories.

Sadly in the 2nd set the Chinese team seemed to have lost focus and were a trailing by 6-1 margin. Pulling themselves together and relying on their “secret weapon” , their quick combination play in the middle helped them to narrow the deficit to 11-10. Russian blockers soon tightened their defence at the net and picked up valuable points through the hard hitting Klets, Spodobets and skipper Piskarev who sparkled as a leader on court.

With both teams committing far too many service errors the 3rd set lost its sparkle. However when China’s prolific attacker, Jiang Zhan Yung latched on to setter Cui Ker Rui’s crafty sets to hammer home a few points it jolted the Russians back into their trade mark power attacking mode. Powerful rallies ended with solid blocking or at times with balls flying off the blockers out -stretched hands and into the crowd or being grounded on court.

21-19 in favour of the Russians the stage was set for a fight to the end. However it was  the strength of the Russian blockers at the net and the power attacking unleashed by Klets, Sitiuk and Piskarev that wrapped up the set with a 25-20 score line for the Russian lads. Russia took a 2-1 lead.

Winning the 4th set was crucial for the Chinese to keep their hopes alive in the match. Throwing caution to the wind they stepped up their game and took a commanding 10-6 lead. With the battle for supremacy raging in the middle by both teams it brought loud cheers from the stands as the fans got behind their favourite team spurring them on to post points on the board. The court began to resemble a World War 2 battle field as “bodies flew” in every direction spiking, blocking and sliding onto the floor to recover balls that came off a spike or block. With the score at 24-23 in China’s favour the Russian fans “held their breath” and put their palms together as if in prayer. Sadly for the Russian fans China clinched a nail biting 25-23 win to settle matters in the deciding 5th set.

15-10 win. Russia will meet South Africa in their final match on Sunday. There is every indication that the Russians will reach the podium as the tournament’s gold medallists.