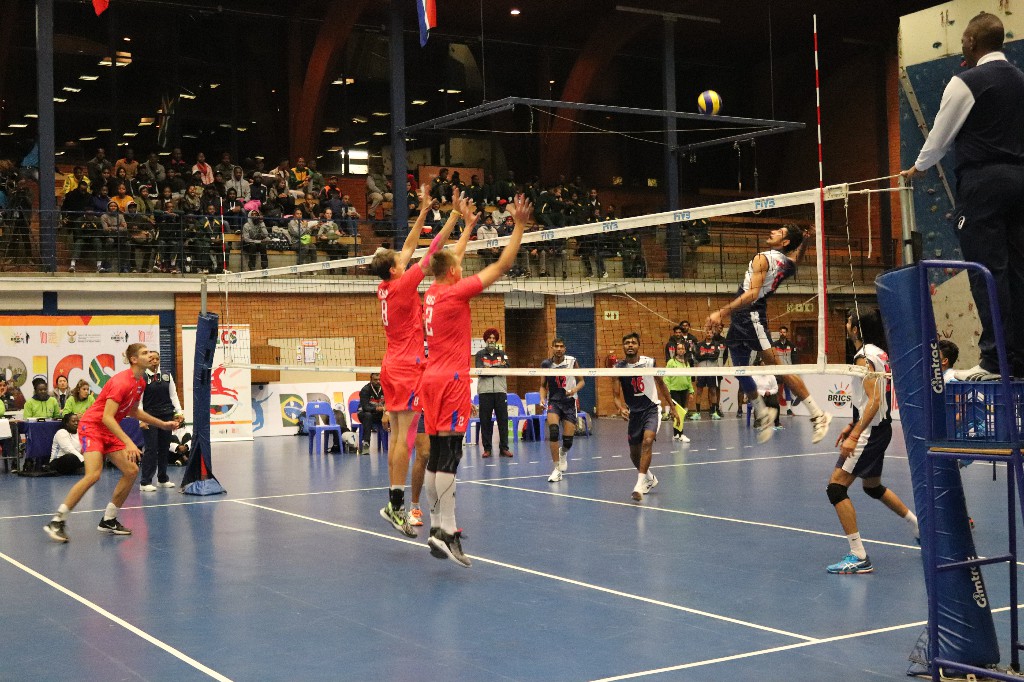 Dubbed the “sky scrapers” of the 2018 BRICS GAMES because of their average height of 2 metres the Russians were oozing with confidence as they faced the Indians who went on to prove that they were no push overs against the hard hitting Russians.

Power services coupled with solid blocking and an all out scorching power attacking not seen before in sub Saharan Africa at the under 20 level were the hall marks of the encounter between the Russians and the Indians. One could have easily mistook the encounter be a military warfare fought by bitter enemies.

Stamping their authority early in the match the Russians stretched their 7-6 lead to 13-7 through attackers Nikita Krot, Kirill Klets and Ilia Spodobets.

However whenever India’s setter, Muthu Samy needed to break service he turned to his fire brand attacker, Amit who powered his way regardless of who were executing the Russian blocking. Amit did not disappoint as he put points on the board with sheer fire power. Russia’s middle blockers, Kirill Kranin and Nikita Krot teamed up well in defence at the net to stop the Indians from clinching the set.

Russia won the explosive opening set with a 25-17 score line.

The second set belonged to the Indians as they turned on their magic with venomous attacking power that stunned the Russians as they lost quick points (7-3).

Fighting back through Krot, Kranin and Spodobets the Russians levelled the scores at

12-12. Kirill Kranin was particularly impressive with his powerful quick hand action as a middle attacker that beat the Indian blockers at the net.

When India’s Rohit Kumar stepped up to unleash his powerful jump service the Indian team picked up 7 points in a row as the Russians struggled to receive the power service.

Adding to the Russians woes power attacker Amit fired from both the back court and when he was a front court attacker much to the dismay of the Russians. India won the encounter 25-17 to level matters at 1-1.

The closely contested 3rd set had the fans in ecstasy as both teams engaged in power play. Rohit Kumar was once again a thorn in the side of the Russians as they struggled to contain his “booming rocket” service. From a 18-17 lead India closed proceedings with a 25-19 margin to take a 2-1 lead in a best of 5 sets match.

With the Indian fans hoping that their team will end matters with a 3-1 win in the 4th set as it was predicted that the team that wins the encounter between India and Russia will go on to win the tournament.

Instead of taking the fight to the Russians the Indians fell foul to careless mistakes which they went on to pay dearly for. Encouraged by India’s loss in concentration the Russians grabbed the opportunity and kept the score board ticking. Taking a 19-17 lead the Russians used their own brand of “bullet service” to stretch their lead.

The Russian bench rejoiced when their attackers put the 4th set beyond the reach of their opponents with 25-21 win to force the encounter to a deciding 5th set..

The 5th set had the fans salivating for more of the action packed exchanges between the two teams. While the Russians took their pedal off their booming services and concentrated on doubling their efforts at the net the Indians chose to continue with power jump serves which did not work for them with devastating accuracy like in the previous sets.

Weary hands and legs in the energy sapping 5th set could have contributed to that.

With Russian blockers standing steadfast in defence they sealed the deciding 5th set with a hard fought 15-11 win.