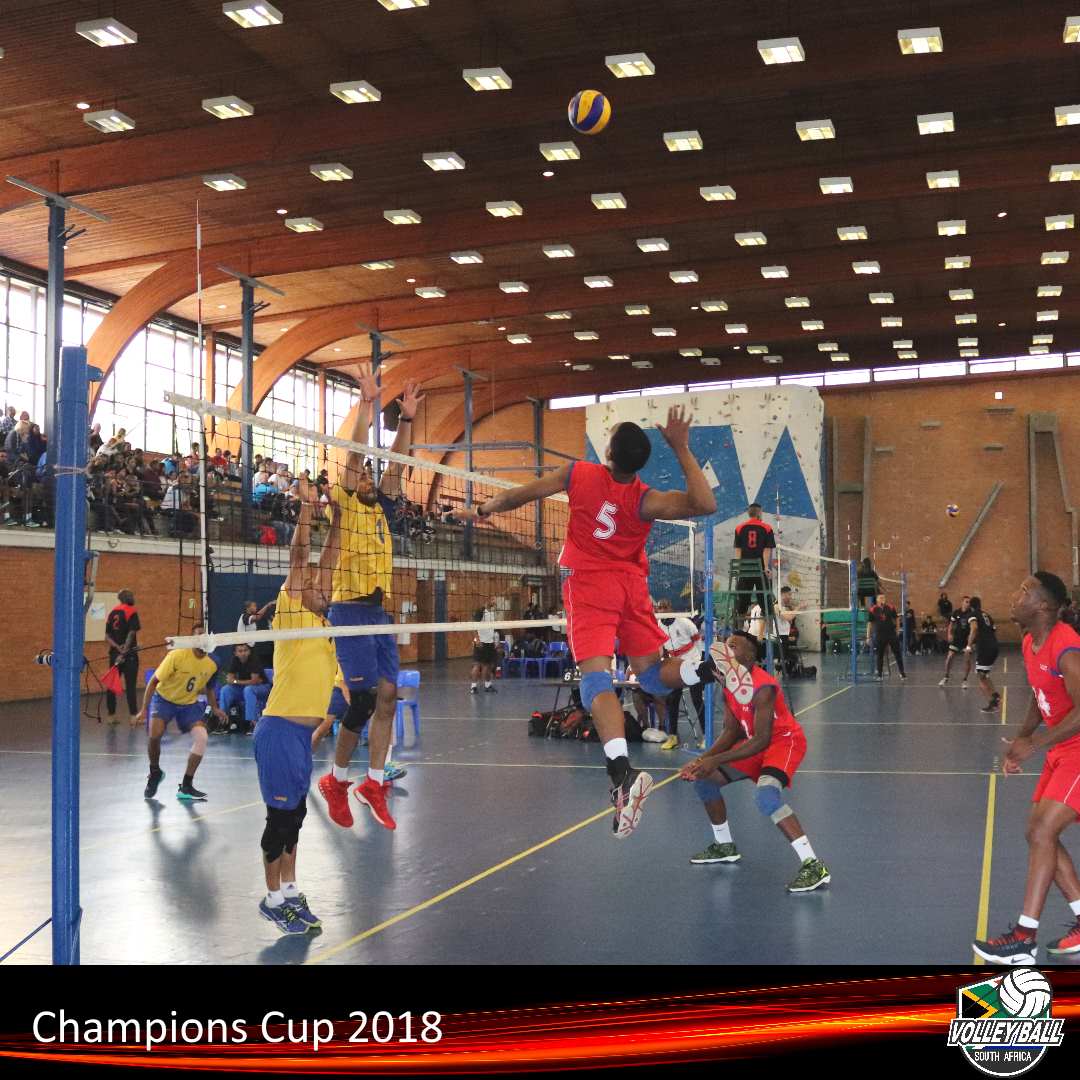 Fans who rocked up at Wits University’s Old Mutual Sports Hall on the penultimate day of the 5 day Champions Cup tournament witnessed great excitement as the semi finalists pulled out all the stops in their attempts to reach the podium as medallists.

In the first semi final encounter in the women’s category, UWC squared up against a very agile and determined VUT in an explosive encounter which was eventually decided in the 5th set. With a 25-12 thrashing in the first set UWC saw their chances of making it into the final ebbing away from them. Stepping up a few gears UWC stormed past VUT with a commanding 25-16  2nd set win. Loss of concentration in the UWC camp saw the team lose the 3rd set by a 25-19 margin. However winning the 4th set (25-20) boosted UWC’s chances of victory. Fought on a knife’s edge the 5th set went in the favour of the Western Cape team by a 15-12 margin. The 2nd semi final encounter between Tuks and Super Kids was won by the former in straight sets, 25-18; 25-10; 25-16. Tuks will meet UWC in the 2018 Champions Cup final.

In the men’s semi final match, Delfos of Johannesburg posted a hard fought 25-17 first set win against UWC, but went down 25-18 in the 2nd set to the Capetonians who often seemed like battle weary soldiers on the court. Playing with a lack of quality subs on the bench forced coach Loet Groenewald to rely heavily on power attacker Clinton Stemmet and middle attacker Ivan Solomons to get them to the final. Sadly it was too much of a responsibility for the duo who could have done better if others in the team also pitched in to derail the efforts of the high riding Delfos whose sights were firmly set on becoming the 2018 Champions Cup winners. Delfos won sets 2 and 3 by posting a 25-16; 25-11 score line to gallop to the final scheduled for Monday, 30 April.

In the 2nd semi final clash, defending champions, Uni Jozi lost the opening set 25-18 to KZN’s Liberte who were the winners of the inaugural Champions Cup in 2000. Sadly no KZN team has won the coveted Champions Cup silverware since then. Liberte were stopped in their tracks when UJ levelled matters with a 25-21 2nd set win. Committing far too many unforced errors, especially service faults, unacceptable at this level of competition, Liberte slid to defeat by losing the 3rd and 4th sets, 25-22; 25-18 much to the frustration of the KZN fans.

The women’s final between UWC and Tuks takes place at 12:00 while the men’s gold medal match between Delfos and Uni Jozi is scheduled for a 14:00 start.