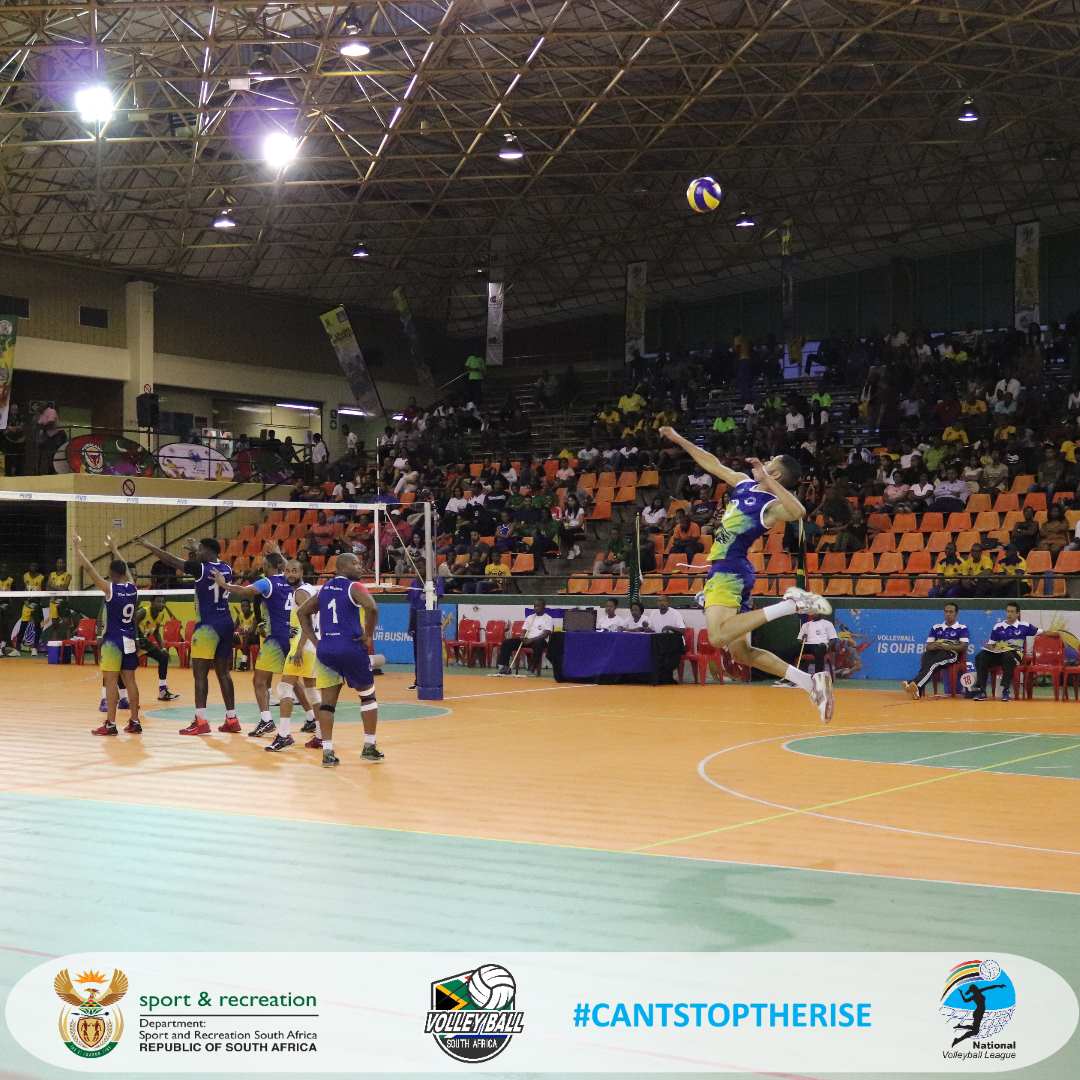 In the opening minutes of the first semi final match  between the Kingdom Rhinos{KZN) and Gauteng Thunderbolts, Devin O’ Regan latched on to Rhinos’ play maker. Kiresh Hiralal’s perfect set to position 2 and pounded it past a hapless Thunderbolts blockers to register their first point. With fearless attacker Sandile Khoza and captain Quwin Naidoo oozing with confidence the Kingdom Rhinos took a blistering 7-3 lead much to the delight of the partisan crowd.

Not to be out done by crowd favourites, the Kingdom Rhinos their Gauteng opponents stepped up their game through the tireless efforts of setter Warren Sieberts who gave his attackers, Keifer Govender, Jamine Naidoo and Thabiso Lekoloane ample opportunities to close the points gap.

With the Mozambiquean   international referees stamping their authority on the game in which the issuing of 2 yellow cards immediately put a stop on captains querying  every decision allowed the match to proceed with out unnecessary interruptions. Players now concentrated on putting points on the board and entertain the fans. The Thunderbolts attackers took the fight to the Rhinos and closed the points gap to 8-8. Devin O’Regan stepped up to increase the Rhinos lead through clinical finishing from the net from both the power and utility positions. The Rhinos 15-13 lead was turned on its head when the Thunderbolts eventually levelled matters at 16-16.

When Warren Sieberts unleashed youngster, Bhekani Dube with quick middle sets the youngster accepted the challenge and paralysed his opponents with scorching attacks that gave the Thunderbolts a 19-17 lead. It seems that the Gauteng lads found a chink in the Rhinos’ amour in middle blocking but failed to exploit that “weakness” by repeatedly using Dube .

At set point (24-19) in favour of the Rhinos setter Warren Sieberts did the unforgivable by serving the ball our, thus handing the set to his opponents by a 25-20 margin.

With Yuvir Ramjit replacing out of form middle blocker Brandon Govender, the Rhinos stabilised their defence at the net. The quiet and unassuming Yuvir Ramjit not only used his blocking skills to keep the Thunderbolts attackers in check but also posted several points on the board without pomp and undue celebrations many of him team mates rejoice in. A more determined Thunderbolts realised that losing the set  will spell doom for them. Grabbing the match by the scruff of its neck the Gauteng lads stepped on the gas and fired telling blows from the wings to pick up valuable points. Rhinos attacking errors and lapses in concentrations allowed the Thunderbolts to level the scores at 21-21. Consecutive unforced errors by the Rhinos thrust the Thunderbolts into a 23-21 lead which they went on to close the set with a hard fought 25-23 win to level the scores at 1-1.

Yuvir Ramjit and Loueshan Gungarajh combined well with skipper Quwin Naidoo to stem the Thunderbolts runaway lead. To add to the Rhinos’ sad tale of woes many of their players were guilty of repeated net touches and service errors, unforgivable at this level of competition.

Regaining their winning ways Quwin Naidoo led his team with a series of quality attacks to take the set with a 25-20 win.

Tournament favourites, the Western Cranes from the Western Cape had a score to settle with Limpopo’s  Mapungubwe Warriors  who had defeated the Cape side in a five set thriller in the round robin stage stage.

With the tall and strongly built Ivan Solomons back in the team to strengthen their defence at the net together with the dependable Velisha Ntshuntshe, the duo will be difficult to contend with by the best of attackers at this competition.

The fiery contest started with the Cranes taking the lead through their skipper  Clint Stemmet and Freedom Chiya  who “pulled the trigger” with ease every time that they connected with youngster, Marshallino Jullies who put in a five star performance as a setter. Also putting in a star performance was Cranes’ libero,  Carlo Van Nelson who did not put a foot wrong as a receiver and a cover player for his team.

The Warriors’ go to attacker, Abram Mapharumela was a handful for the Cranes as he had a tendency to “go for the jugular” whenever he was serviced.

Velisha Ntshuntshe used his huge frame to not only intimidate his opponents at the net but he also fired a few quick attacks off his setter, Jullies’ nimble fingers to take a 9-5 lead. Left handed attacker, Ethan May was devastating especially from the utility position from which he unleashed his powerful attacks that gave the Cranes a 18-12 lead.

Ethan May went on to pick up two quick points when the Warriors cover players failed to receive his spike services.

An exciting rally ensued when the score was at 24-13. However, it ended dramatically when setter Jullies caught the Warriors’ cover players napping with a well disguised “dink”. The Cranes won the opening set with a 25-13 margin.

The 2nd set was a crowd pleasing encounter which thrilled and entertained them. They responded with loud applause that drove the match to greater heights .While Solomons and Ntshuntshe kept a tight rein in the centre of their defence the Warriors chose to get their attackers to concentrate on piling on the pressure at the wings. They were rewarded by picking up valuable points that helped them keep the score board ticking evenly until the scores deadlocked at 18-18. When the Warriors’ Abram Mapharumela became “too hot” to handle as a blistering attacker it seemed that the Limpopo outfit were on the path to turn the table on their more fancied opponents.

(24-21). When Mapharumela stepped up to serve  with the score at 24-21 in the Cranes’ favour his serve failed to cross the net.

The Cranes deservedly won the set by a 25 -21 score line.

The 3rd set became a tad bothersome for the Cranes as unforced errors reared its ugly head among their players, losing five points on the trot.

Tightening their defence at the net and accelerating the pace of their attacks handed the Cranes a comfortable 25-14 win. The Cranes will meet KZN’’s Kingdom Rhinos in the final of the NVL on Sunday.