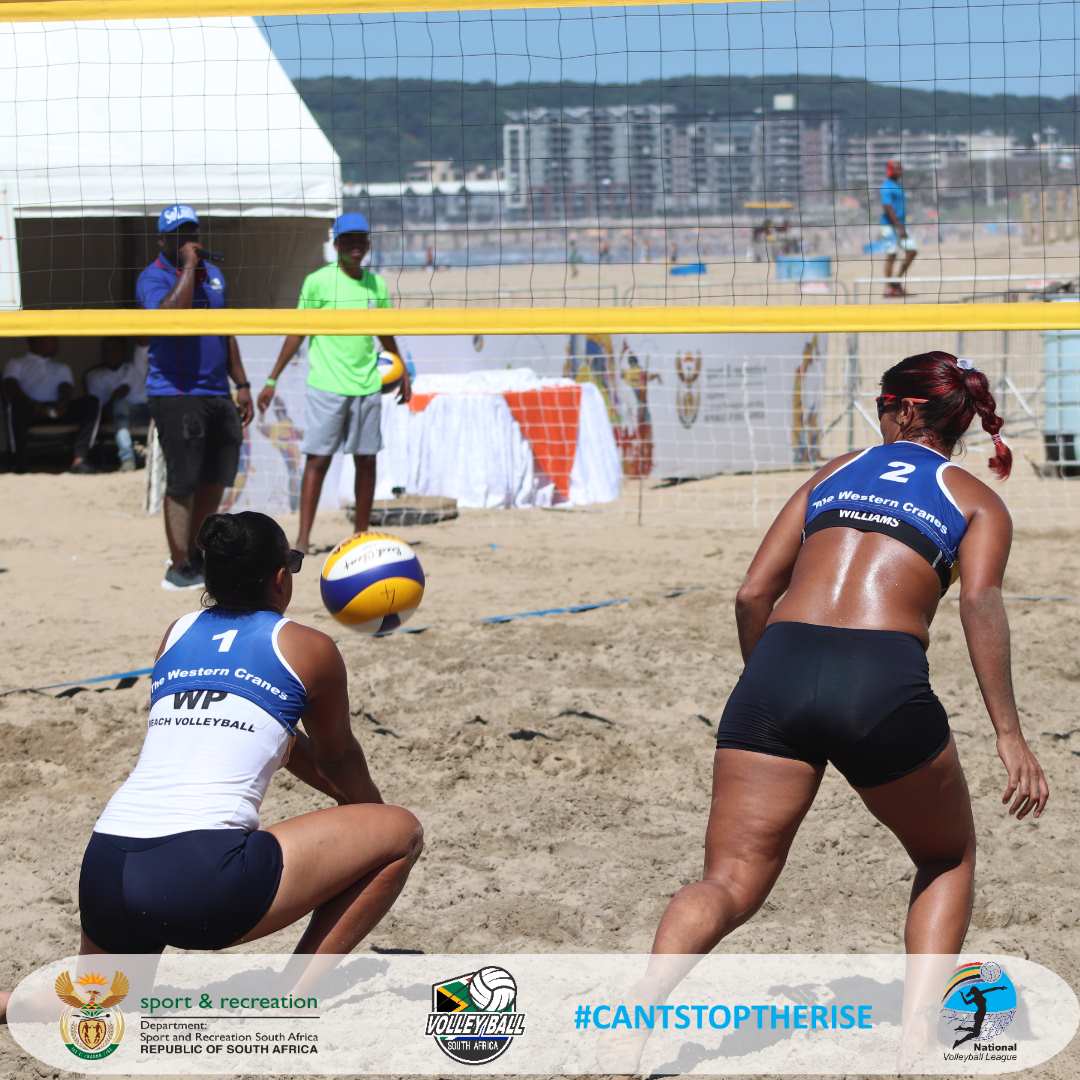 It seemed that youngsters, Lebogang Malahlela and Mokete Matuludi( the Mapungubwe Warriors) from the Limpopo Province went into the semi final clash against the tournament’s top seeds, Randy Williams and Kristen Delcarmer with no hope of upsetting the Western Cranes duo. Such was their luke warm performance that the Cape duo did not even break into a sweat despite the sweltering heat.

Taking an effortless 14-6 lead in the opening set the top seeds were in cruise mode as they used the length and breadth of their opponents’ court to score points and at the same time to try different attacking options.

After closing the first set with an easy 21-10 score line Randy and Kristen took their foot off the pedal which allowed the young Limpopo lasses to  pick up valuable points.

Under a more relaxed condition, Lebogang and Mokete put in a creditable performance that showed that they have what it takes to excel in the sport. Given the time and expert coaching the Limpopo duo will in the future be a team to be reckoned with. Picking up 15 points against the number one seeds is an achievement for the young Mapungubwe Warriors. The 2nd set ended with a 21-16  score line in favour of Randy and Kristen.

For Team VSA comprising, Margaret and Manana making it to the semi final was a major boost for the newly formed duo. With the prospect of making it to the final looming largely over their heads Team VSA sprung in to a 3-1 lead much to the dissatisfaction of their more experienced Cape counterparts, Anetta and Bejanke.

While the match was not  an explosive affair as one would have expected at a semi final stage, the teams kept the score board ticking until Anetta and Bejanke moved on quickly from a 9-3 lead to close proceedings with a 21-6 thrashing.

Anetta and Bejanke went on to win the match by posting a 21-13 win to book their place in the final against the number one seeds Randy Williams and Kristen Delcarmer from the Mother City.

Number one seeds, Goldschmidt and Williams domination at the net was the deciding factor that handed them a 21-11; 21-6 victory.

Leo in particular was superb every time he elevated himself out of the burning sand and put the spike beyond the reach of Nathi and Andriko with awesome power that brought respectful nods from the fans.

Andriko and Nathi are a team to watch in the near future as the duo have a presence at the net with the lanky Andriko reaching high to stuff block an opponent and Nathi can pound a quick attack with sheer power.

“a mountain to climb” for the Gauteng lads.

In an encounter that oozed with energy and sheer excitement Khousto and Nthoko immediately took the fight to Nathaniel and Jonas. While Jonas never hesitated to unleash his anger with powerful cross court spikes Team VSA relied on a variety of attacking options that gave them a comfortable 19-9 lead that stunned the Limpopo fans. Team VSA won the set with a 21-9 margin.

Losing the opening set by a 21-9 score line jolted the Warriors in to action whereby Jonas was a constant thorn in the sides of the youngsters.

The battle at the net between Khoutso and Jonas was exciting for the fans as they urged them on through loud cheering.

In the deciding 3rd set Khoutso and the left handed Nthoko displayed greater hunger for victory as they made desperate attempts to keep the ball alive on their side of the court. While the Warriors attacker Jonas reminded the youngsters that he was a force to be reckoned with at the net with his clinical finishing, his partner Nathaniel seemed to have succumbed to the intense heat as he often lost concentration and committed unforced errors much to their detriment.

With Khoutso on fire as a power attacker and Nthoko chipping in with his trade mark “cut shots” from time to time the youngsters wrapped up the set with a well deserved 15-10 win.

Despite the unbearable heat that often took its toll on the players, the Warriors and Team VSA started the set making their intentions clear that a podium place was within their sights at the lucrative 2018 National Volleyball League Beach Volleyball Competition.

However its was the synergy that existed between Margaret and Manana that saw them take a commanding 16-10 lead with Margaret clinically placing her spikes well beyond the reach of the Limpopo pairing. Whenever Margaret was called upon to play the role of setter she gave Manana the opportunity to demonstrate their attacking prowess.

The encounter started with a series of unforced errors, especially service faults that seemed to have put a damper on the game.

With the realisation that bronze medals and a creditable 3rd place were up for grabs at this prestigious competition the teams upped their efforts hoping to take control of the match by posting quick points on the board.

Gauteng’s Andriko used his height advantage to power his spikes and play the occasional deft touches into unguarded spaces on his opponents’ side of the court that gave them the lead.

Once again its was the Warriors powerful attackerJonas Mtholobi who rescued his team by levelling matters at 18-18. With the battle at the net tipping on the side of the Warriors, Jonas fired his team to a heart breaking 21-19 victory.

Refusing to roll over and play dead in the face of Jonas’s wicked power attacks, the Thunderbolts’ duo fought courageously to stay in the match hoping that through their efforts the Limpopo duo may wilt under pressure and lose the set.

However the Warriors were not going down at this stage with a 1 set to 0 lead and battle in the heat to win a deciding 3rd set to be the bronze medallists.

Their determination paid off as the closely contested encounter which enjoyed tremendous crowd support ended in favour of the Warriors with a nail biting 26-24 score line.

The all Western Cape final between top seeds Randy and Kristen and fellow Capetonians Anetta and Bejanka started as a closely contested match with the teams seeking out one another’s weak points to exploit to the fullest and march to the podium as the gold medallists in the inaugural 2018 National Volleyball League’s Beach Volleyball Competition which had a R100 000 prize money on offer for both genders.

While the lucrative prize money was most attractive there was also the title as the winners of the inaugural league that drove the teams to push themselves to greater heights much to the delight of the fans. With the score board ticking at a slow pace because of the intense battle at the net and in the cover positions it was the more experienced Randy and Kristen who went on to put daylight between themselves and their opponents when they stretched their lead in double quick time to an unassailable 18-11 points. Continuing with their winning ways Randy and Kristen posted a 21-14 score line

While Della and Friederiksen combined well to stay in the match with good offensive and defensive strategies they however let the set slip through their fingers, albeit through the gruelling heat, by a close 21-17 margin.

With the mere mention of the all powerful pairing of Grant Goldschmidt and Leo Williams one would imagine their opponents will tremble at the prospect of meeting the Capetonians in any beach volleyball contest, let alone in a national final.

For the Team VSA youngsters, Khousto and Nthoko it was a challenge that they relished and showed no respect for their more fancied opponents when they faced them head on in the final of the 2018 NVL Beach Volleyball Competition.

While the Cape fans expected a quick 2-0 drubbing in front of the SuperSports TV cameras the VSA duo put up a fight although they could not stop merciless attacker Leo Williams putting his team in the lead with a 15-9 score line. Khoutso rose to the occasion and challenged Williams at the net often passing his huge blocks to pick up valuable points.

Nohoko must be credited for his tireless back court work and supplying Khoutso with opportunities to beat the Cape side’s defence.

Leo Williams’s power at the net as a blistering attacker and a crafty player of deft touches into open spaces won them the set with a 21-13 score.

The “do or die” 2nd set set jolted Khoutso and Nthoko into action to make their mark at this level of competition.

Grant and Leo didn’t expect Team VSA to put up a gigantic fight to turn the tables on them. With a lion’s share of the prize money and their number one status in the country at stake, the number one seeds kept the score board ticking and upped their offensive strategy to kill off any threats to their title and their gold medal position in the inaugural competition.

At a breath taking 19-19 score the set could have gone either way as the youngsters also had the crowd on their side.

Grant stepped up to blast his trade mark quick cut shot followed by Leo’s cheeky  “dink”  in to the far corner of the court put the set beyond the reach of the VSA pairing of Khutso and Nthoko.

For Grant and Leo picking up the national title and winners’ cheque  are all part of a day’s work.