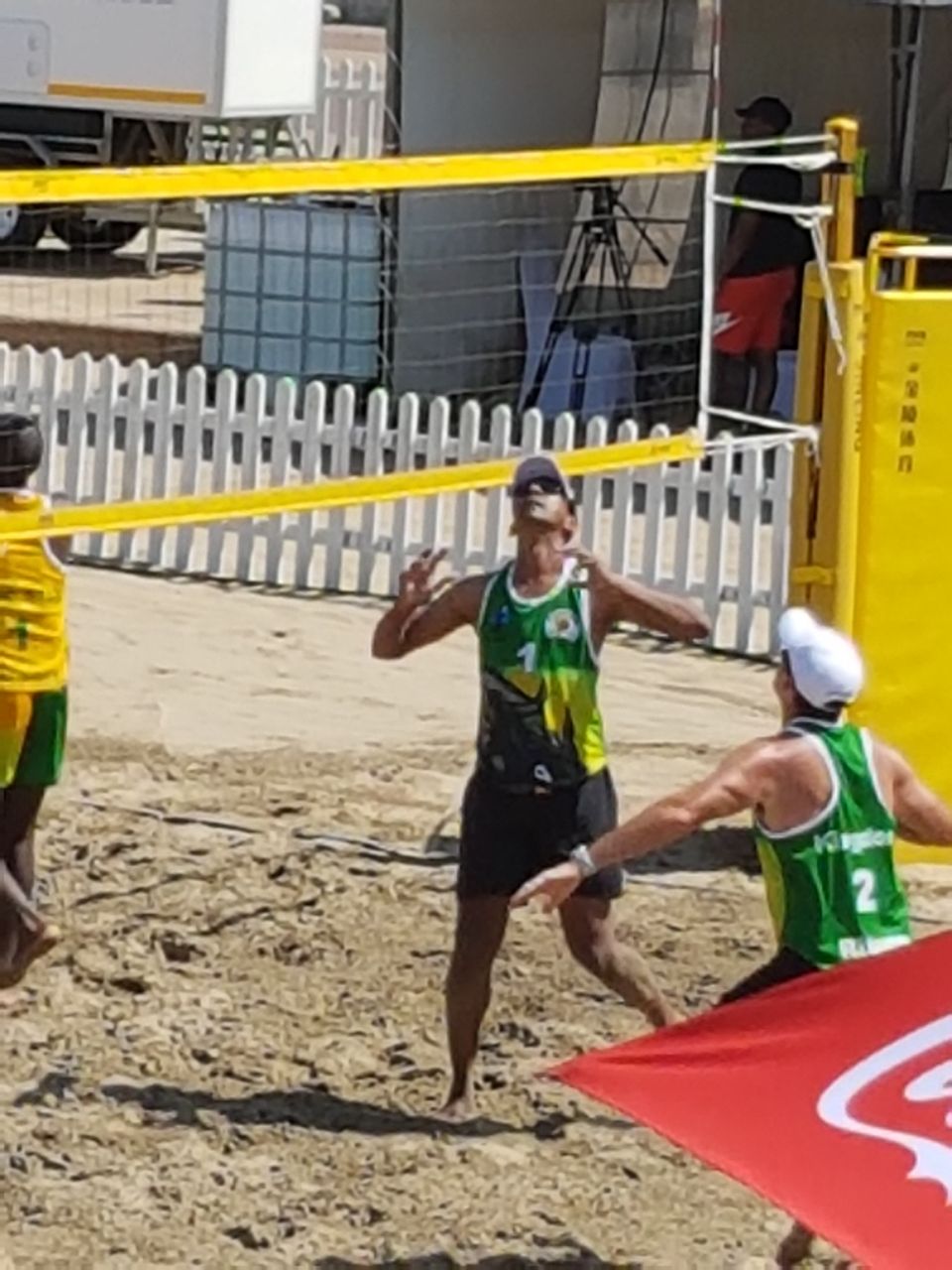 Tongaat’s Kiruben Naicker has teamed up with Durbanite, Richard Payne as KZN’s representatives in beach volleyball at the inaugural 2018 National Volleyball League (NVL), an initiative by Sport and Recreation South Africa (SRSA).

The beach volleyball competition is staged at Durban;s New Beach over four weekends in March as the 1st leg of the NVL. The 2nd and 3rd legs of the NVL take place in 2019 and 2020.

Donning the colour of KZN Kingdom Rhinos, Naicker and Payne faced Vereeniging youngsters, Khoutso Mamobolo and Nthoko Mdinji in a hard fought encounter under very windy conditions. Rotating the blocking/attacking  and back court duties the Rhinos had a tight grip on the match to a point of almost closing proceedings. Committing unforced errors at crucial times resulted in the KZN lads losing the set by a heart breaking 23-25 margin.

Unfazed by the first set loss Naicker and Payne blasted their way past the duo from Vereeniging with a morale boosting 21-15 score line.

With the wind being a major factor in the ‘do or die’ 3rd set the Rhinos were unable to stop going down by 16-14 loss. Khoutso and Nthoko winning by 2 sets to 1.

Digging their heels deep in the sand Naicker and Payne unleashed their power on to Eastern Cape’s Cheslyn Bentley and Bueran McCarthy (2-0) with the Free State duo, Itumeleng Khomo and Thabiso Letakeng succumbing to a similar fate as their Eastern Cape counterparts.

In the 2nd weekend fixtures Naicker and Payne lost in a tightly contested encounter by a 21-16; 21-19 score line to Gauteng’s  Uzubenathi Ntumbu and Andriko von Ludwiger. According to Naicker the match could have gone their way had they dealt with the tall and strongly built Andriko von Ludwiger who used his height advantage  both as a strong blocker and attacker to stay ahead in the game.

Once again Naicker and Payne vented their anger after a losing a match against their next opponents. Unfortunately for Lukholo Jooste and Aviwe Mamfanya who represented South Africa at the Youth Commonwealth Games

According to Kiruben Naicker their mettle will be tested over the coming weekend when they face the competitions top two seeds, Grant Goldschmidt and Leo Williams from the Western Cape and Limpopo’s Nathaniel Rafapa and Jonas Mtholobi. Naicker is appealing for crowd support at Durban’s New Beach this weekend.

Admission to the venue is free.