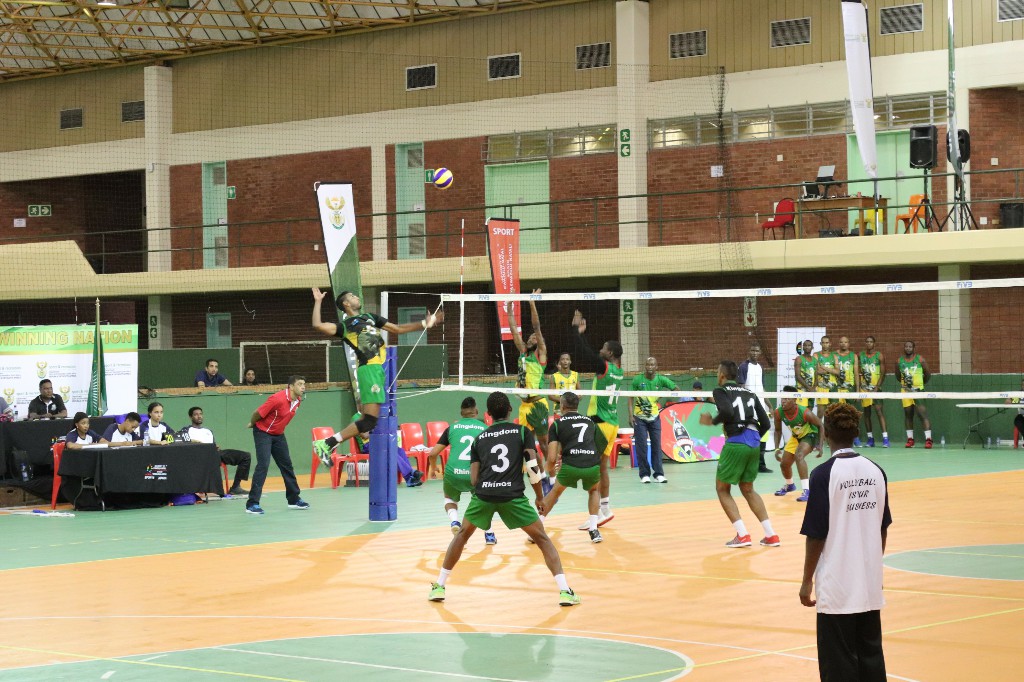 Nine provincial teams converged on the University of Kwa Zulu Natal’s Westville Campus Sports Centre (indoor volleyball) and Durban’s New Beach (beach volleyball) over the weekend for the second round of fixtures in the National Volleyball League (NVL). The 2018 edition of the NVL is played over four weekends in March with a prize money of R 200 000 on offer. The next two editions of the R10 million NVL takes place in 2019 and 2020.

Local fans were delighted when KZN’s Kingdom Rhinos ended the weekend fixtures with wins against North West Dynamites and Free State Giants in straight sets (3-0) to leap frog tournament favourites, the Western Cranes from the Western Cape to the top of the log standing. The Rhinos registered straight sets (3-0) wins against six provincial teams thus far. However, their mettle will be tested in the final round robin matches against the Western Cranes and the Gauteng Thunderbolts scheduled for next week.

According to Rhinos Head Coach, Jayson Govender his team has a fine blend of youth and experience and he has the luxury to call upon three quality  setters in Sholen Govender, Hiresh Harilal and former SA National team play maker, Ryan “Spitz” Lahldas. Joining skipper, Quwin Naidoo (former SA under 23 captain) in attack are youngsters Devin O’ Regan, Sandile Khoza and Preegan Gungarajh.

“ In the tall and strongly built Brandon Govender and Loueshan Gungarajh the team has the strongest defence in the NVL as evident in our straight sets (3-0) wins, “bragged coach Govender.

There is every indication that the Western Cranes, Gauteng Thunderbolts and dark horses from Limpopo, Mapungubwe Warriors will join the Kingdom Rhinos in the top four contest scheduled for the final round in the last week of March. The round robin matches end next week.

Meanwhile the beach volleyball competition has been dominated by the teams from the Western Cape.

Seasoned campaigners on the international beach volleyball circuit, Grant Goldschmidt and fellow Capetonian, Leo William are tipped to march to the podium as the gold medallist and pocket a lion’s share of the prize money.

Flying the KZN flag are veteran contenders Richard Payne and Kiruben Naicker who are certain of making it among the medallists.

In the women’s category the Western Cape’s Randy Williams, Kristen Delcarme, Anetta Frederiksen and Bianca Della are the front runners. Admission to the venues is free.