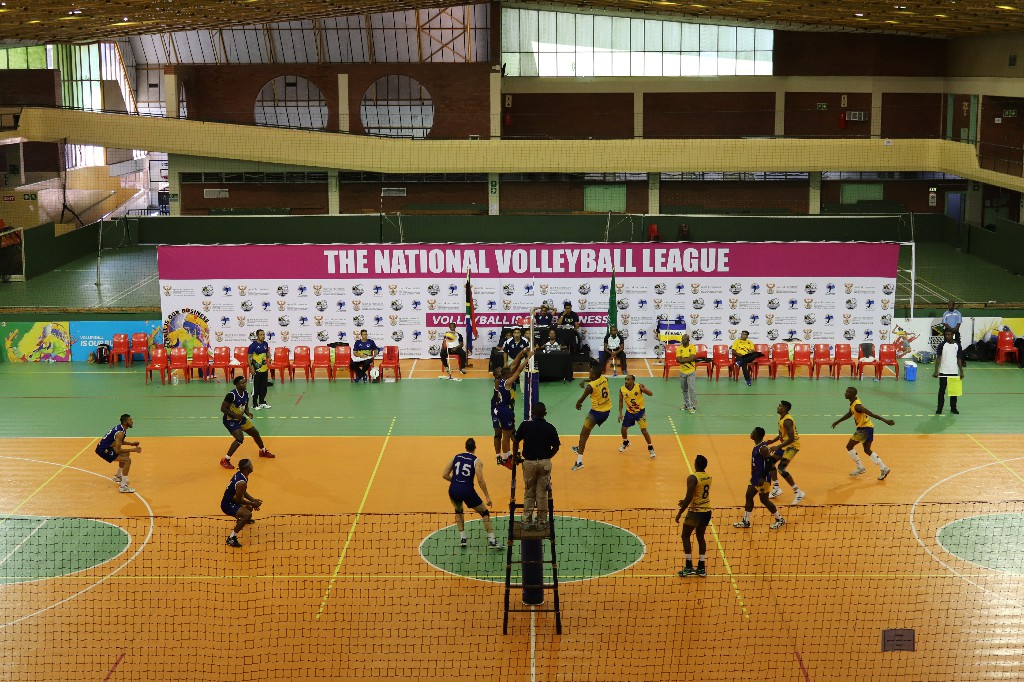 The opening match on the 3rd week of fixtures on Friday between Free State Giants and Mapungubwe Warriors ended in five sets, a first in the tournament (25-20; 21-25; 23-25; 15-9) in favour of the Limpopo outfit, Mapungubwe Warriors.

Given their winning form over the past 2 weeks the Warriors were favourites. Winning the first set by an entertaining 25-20 score line set the stage for victory for the Mapungubwe Warriors.

Notwithstanding the first set loss the Giants lived up to the names, “Giants” and fought all the way and grabbed a 25-21 and a nail biting 25-23 win in the 2nd and 3rd sets to lead by 2 sets to 1.

With a 2-1 lead one would have expected the Free State Giants to take the fight to their opponents and wrap up the encounter in their favour.

Sacrificing power for a dull and boring cautious play where deft touches in to open spaces became the order of the day the encounter lost its flair and excitement.

From time to time Warriors power attacker, Abram Mapharumela unleashed the occasional bullets that kept the Limpopo outfit ahead on points. It came as no surprise when the Warriors stretched their lead to 24-21. When power attacker, Mapharumela raised his hand to setter Frans Lefawane the latter delivered a tailor made set which Mapharumela blasted off the outstretched hands of his opposition blockers to win the set 25-21 and force the encounter into a deciding 5th set.

Starting the crucial 5th set with a service error is not a good omen as the Free State lads later found out. A consecutive unforced error by the Giants boosted the morale of the Warriors who went on to to end proceedings with a 15-9 score line and win by 3 sets to 2.

Billed as a must win match for the Eastern Cape Eagles that will bring them closer to  stake a place in the lucrative semi final stage.

The Eagles seasoned setter Shaun Diedericks  skilfully  brought his attackers, led by the diminutive power hitter Yaseen Hendericks to keep the pressure on their more fancied opponents from the “ City of Gold”.

A closely contested opening set soon became a run away encounter when Gauteng Thunderbolts experienced play maker Warren Sieberts turned on the magic with a variety of well delivered sets to attackers Sandile Mabaso , Nathan Ernest and  Jamine Naidoo who had a field day piling on the pressure to wrap up proceeding with a comfortable 25-15 score.

Realising that losing the second set could spell disaster for the  Eastern Cape outfit, the lads rejuvenated approach to the match saw them fight toe to toe with the Thunderbolts and kept the score board ticking. The crowd loved every bit of the action meted out by both teams. At 19-19 the closely contested set could have gone either way. However it was the experience of the Thunderbolts players at this level of competition that saw them through by sneaking in with a 25-23 win.

The crucial 3rd set had all the trappings of a match in a final of a tournament.

Great display of attacking volleyball was a feast for the fans who responded with loud cheering. From a 20-20 deadlock the Thunderbolts sped to a 25-21 win much to the disappointment of the Eagles who could have turned the tables on the Gauteng team had they capitalised on missed opportunities.

Crest fallen  Kingdom Rhinos’ fans made a hasty exit from UKZN’s Westville Campus Sports Centre wondering how their team let the encounter against Western Cranes ,their arch rivals from the Western Cape slip through their fingers. The home side went down by 3 sets to 2 (23-25; 25-21; 17-25; 25-21; 12-15) to slip to the number 2 position on the NVL log table.

The old adage is that a team that commits far too many unforced errors is bound to end up on the losing side. Such was the case with the Kingdom Rhinos where a few of its players were guilty of several net touches ,faulty services and lapses in concentration that cost the team dearly.

The Kingdom Rhinos is a quality team that deservedly occupied the number one spot after having beaten six provincial teams in the NVL in straight sets (3-0). However in the long awaited match between the Rhinos and Cranes that was billed as the “clash of the titans”  the Rhinos attacker Preegan Gungaraj and  libero, Eshalan Chettiar failed to rise to the occasion, more especially as  the two players were crucial to the team in the offensive and defensive aspects of the match.

While Western Cranes’ attack force spearheaded by  Clinton Stemmet, Freedom Chiya and Ethan May were rampant posting quick points on the board that boosted their morale. The Rhinos clawed their way back through the efforts of Devin O’ Regan, Loueshan Gungarajh, Quwin Naidoo and

Yuvir Ramjith who also took care of matters at the net. Levelling matters at 17-17 the encounter became  hotly contested. At 23-23 inform Cranes’ attacker, Clinton Stemmet pushed the score to 24-23 with his trade mark blistering cross court attack. In his attempt to level the score at 24-24 Rhinos’ Preegan Gungarajh irresponsibly fired the attack out of bounds , handing the opening set to the Cranes with a heart breaking 25-23 score line.

With out of form attacker, Preegan Gungarajh being rested Rhinos’ coach Jason Govender gave the diminutive Sandile Khoza the opportunity to restore some provincial pride.

Khoza did not disappoint as he became a handful for the Capetonians to handle. Joining Khoza in attack was Devin O’ Regan who sparkled as an attacker. Power driven attack and block combinations and desperate attempts to recover balls that came of the block were a marvel that was savoured by the fans who responded with applause.

The Rhinos won the set by a 25-21 margin when Khoza pounded a quick set from 2nd string setter, Kiresh Hiralal.

The handful of Western Cranes fans rejoiced when their team  capitalised on the home team’s lapses in concentration and went on to win the 3rd set by a 25-17 margin.The Kingdom Rhinos responded by winning the closely contested 4th set with a confident 25-21 score that forced the match in to a deciding 5th set, much to the delight of the local fans.

In the “do or die” 5th set play maker  Kiresh Hiralal served the ball out which is deemed as a bad omen with the defaulting team ending up on the losing side.

With the high riding Cranes changing sides on the court with a 8-3 lead it seemed that the Rhinos were “dead just waiting to be buried”. A fight back began which resulted in the Rhinos closing the points gap (10-7) and then at 13-11 a score that the Rhinos could have levelled and posted a 15-13 win. However the pressure took its toll on the Rhinos who succumbed to a 15-12 loss when Clint Stemmet closed proceedings with a fine attack that beat the Rhinos blockers. The Capetonians exploded with delight and briefly raced around the court.

The Western Cranes climbed to the top of the log standings.

Playing in their final round robin match in the 2018 National Volleyball League (NVL), the Eastern Cape Eagles coach Sparrow Maarman rested his “big 4” players , Shaun Diedericks (setter); Rashid Jappie (middle blocker) and attackers, Peter Size and Yaseen Hendricks for the encounter against bottom of the log Diamond Kudus from the Northern Cape.

Such was the confidence that coach Maarman had that his largely 2nd string players will do the job for the team with a straight sets victory.

Taking a 12-5 lead the Eagles youngsters led by play maker Siphelele Antony set the stage for a first set victory with a steady supply of opportunities for his attackers Sureshin Moothoo, Areeb Sookdin and Thembelani Nogwina who did not disappoint and kept their team in the lead.

A spirited response from the Kudus’ big hitters, Michael Smith, Boitumelo Moloto and Mvuleni Tap closed the points gap. From a 19-17 lead the Eagles soared to end the set with a morale boosting 25-17 win, albeit by their 2nd string team.

The tightly contested 2nd set had its moments of powerful exchanges at the net that brought respectful nods from the crowd.. When the scores were tied at 18-18 the Eagles attackers gradually put day light between themselves and their opponents. Reaching 25 points with some fine attacking the Eagles ended the set by a 25-21 margin thus pouring cold water on any attempts by the Diamond Kudus of up setting them.

Racing to a 7-1 lead in double quick time the Eastern Cape Eagles won the 3rd set with a 25-12 score line.