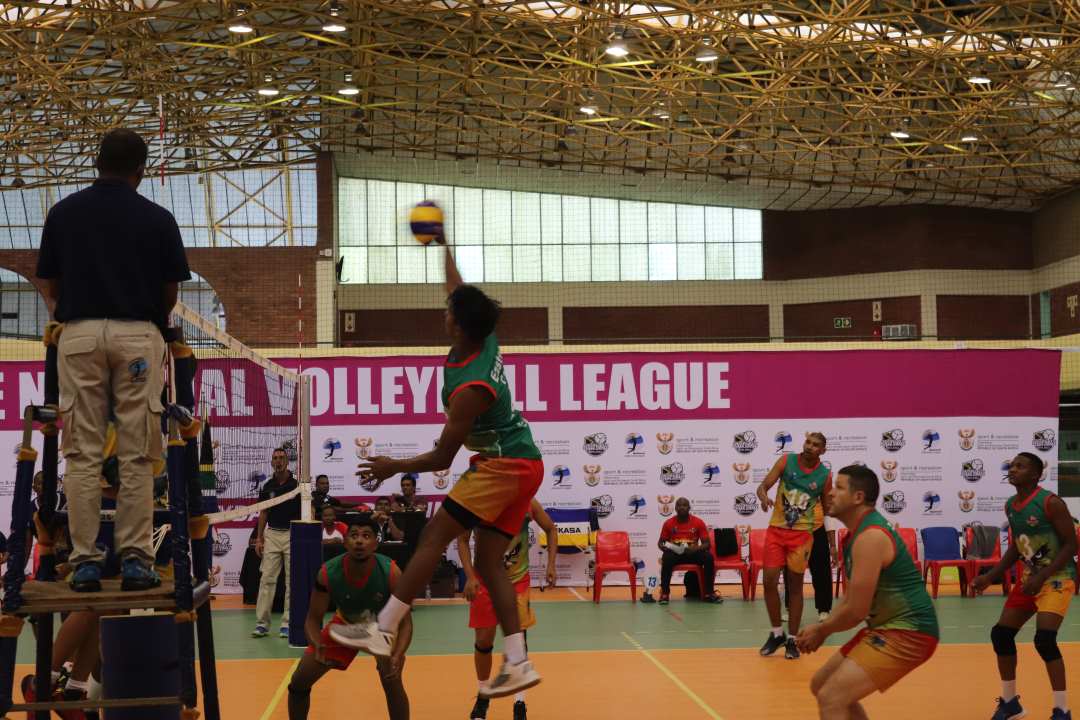 With two weekend wins under their belts against Mpumalanga Buffalo (3-0) and Gauteng Thunderbolts (3-1) the Western Cranes proved to be too strong for the Eastern Cape Eagles when they clashed in the opening fixture on Sunday. A 3 sets to 0 straight sets win (25-16; 25-13; 25- 23) ended the all Cape encounter.

Beset with far too many unforced errors the Eagles lost the opening set to the tournament’s log leaders, the Western Cranes by a 25-16 margin with Freedom Chiya and Ethan May joining skipper Clint Stemmet to put the set beyond the reach of the Eastern Cape team.

Continuing with their winning ways the Cranes posted an easy 25-13 win.

With a comfortable 2-0 lead the Western Cranes took their foot off the pedal which presented the Eagles an opportunity to turn the tables on the Capetonians with a prospect of a hard fought win in the 3rd set. Taking a 13-11 lead prompted the Eastern Cape lads to keep the pressure on and allow the Cranes to fall foul to unforced errors.

Shaken by the prospect of losing the set the Western Cranes strengthened their defence at the net and Clinton Stemmet spearheaded the attack. Clawing their way back the Cranes took a 20-17 lead that sounded the alarm bells in the Eagles camp.

Not to be out done the Eagles surprised the Cranes when they levelled matters at 22-22 and there after at 23-23.

When Peter Size fired a back line attack out of bounds it signalled the death knell for the Eagles.

Latching on to a superb set from the Cranes’ play maker ,Marshalino Julies, fearless attacker Clinton Stemmet was unstoppable as he pounded home from position 4 to close the set with a nail biting 25-23 win.

With only Lemohang Possa posing a real threat to the Rhinos defence at the net, the home side committed far too many errors that  gave hope to the Giants of winning the set. Had it not been for a fiery display of attacking volleyball from Loushen Gangarajh, Brandon Govender and Devin O’ Regan the Rhinos would have lost the set. Gungarajah showed his dominance in attack and as a blocker. At 24-17 Devin O’ Regan rose majestically and pounded a quick set to the antenna with sheer brute force to end the set with a 25-17 score line.

Rhinos lost their rhythm in the ensuing set allowing the Giants attackers Lemohang Possa and Rakhiba Nau to take full advantage and close the points gap. Rhinos skipper Quwin Naidoo was central to his team’s fight back as he combined well with play maker Sholen Govender to post a 25-20 win.