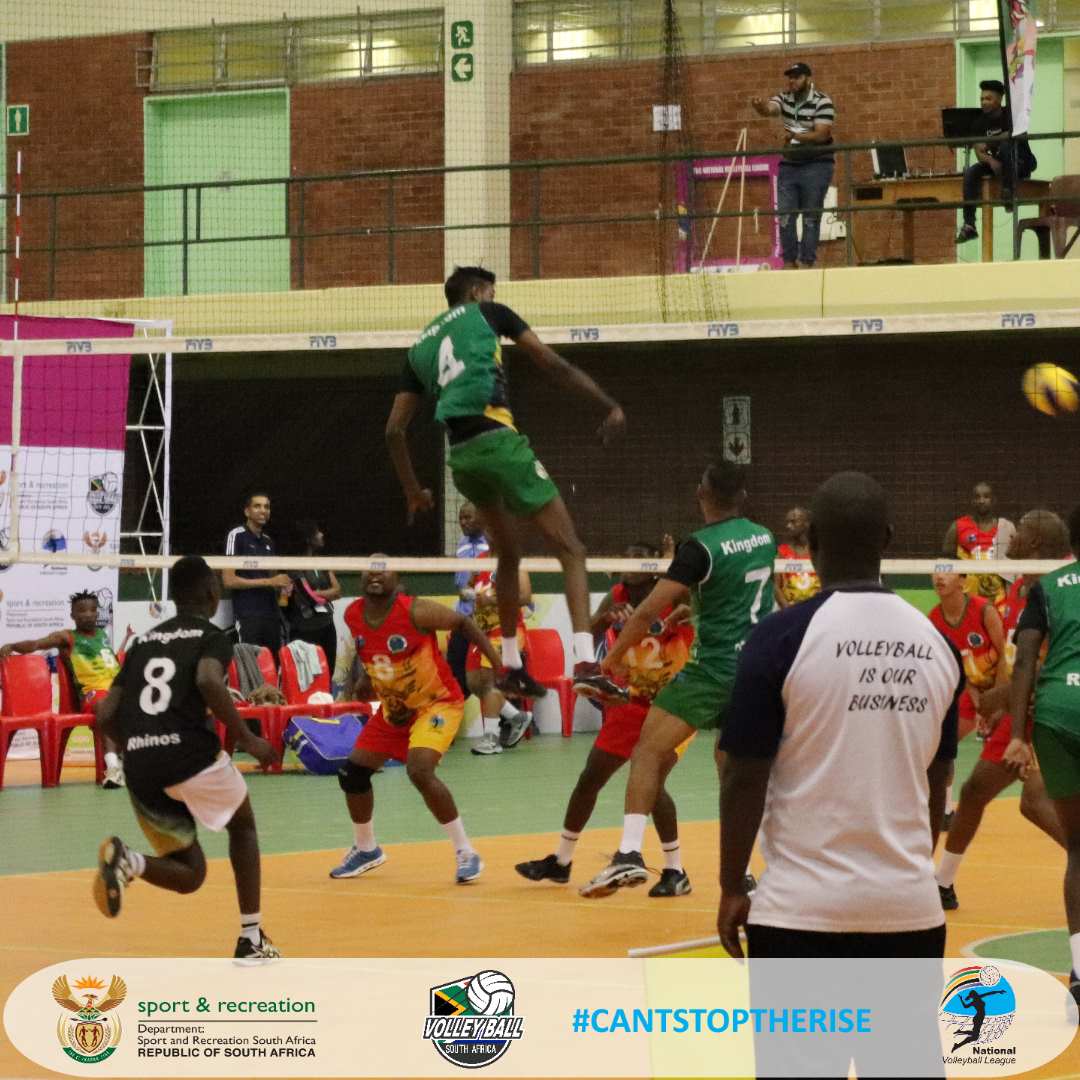 It was a case of a “baptism of fire” for the winless Diamond Kudus from Northern Cape when they faced the wrath of the log leaders, Kingdom Rhinos who went on to thrash the newcomers in straight sets 3-0 (25-6; 25-8; 25-10).

Starting the first set with a strong line up of attackers and blockers the Rhinos raced to a 11-3 lead forcing the Kudus into a 25-6 loss.

Good setting from Sholen Govender to his attackers had the tendency to befuddle the Diamond Kudus blockers who were often stranded while attempting to contain Rhinos’ attacking force resulting in a 25-8 hiding in the 2nd set. Attacker Devon O’ Regan had a field day wreaking havoc in the Kudus defence and cover.

With a comfortable 2-0 lead Rhinos coach Jason Govender had the luxury of trying out different combinations. Back up setter, Kiresh Harilal and prolific attacker Preegan Gungarajh were thrown into the fray to enjoy some game time. Harilal made way for skipper Quwin Naidoo who filled the role of setter and when called upon can be an explosive attacker and blocker.

At times the encounter seemed like a practice match for the high riding Rhinos who wrapped up the 3rd set with a 25-10 score line.

The encounter between Mapungubwe Warriors from Limpopo and Eastern Cape Eagles was a great advertisement for the sport at this level of competition as the teams kept the fans entertained with an explosive brand of volleyball that brought  loud cheers every time a spike was grounded or a solid block was effected.

With the scores tied at 5-5 in the tightly contested opening set it was Warriors’ setter Frans Lefawana who turned on the magic with a spread of sets that allowed his attackers to keep the score board ticking. Warriors’ Jonas Otsweleng and Abraham Mapharumela were particularly devastating in attack pushing the Eagles onto the back foot.

Eagles’ Peter Size, Yaseen Hendricks and Rashid Jappie reminded the Warriors that they were out to turn the tables on them by pounding attack after attack that closed the points gap.

The high octane 3rd set was fought on a knife’s edge with both teams keeping the score board ticking evenly.

It was through sheer determination that the Eagles soared above the Warriors blockers to post a hard fought 25-22 win.

The Mapungubwe Warriors stepped up their defence at the net which gave them a 18-13 lead which they went on to convert to a well deserved 25-16 4th set victory.

Dubbed as the “clash of the titans’ the encounter between long time rivals, Gauteng Thunderbolts and the Western Cranes from Cape Town lived up to its reputation and kept the fans salivating every time attackers and blockers rose up in the air to make their mark.

Starting the opening set with an all out attacking strategy both teams fought all the way to exploit each other’s weaknesses. Robust play, power attacking, solid blocking and desperate attempts to pick up balls that came of the blocks were the order of the day.

Impressive attacking from Thunderbolts left handed attacking machine, Thabiso Lekoloane  combined well with Keifer Govender and Oscar Leukhele that kept the Gauteng lads toe to toe with their more fancied opponents from the Western Cape. The nail biting encounter which enjoyed great crowd participation ended with a 27-25 score line in favour of Thunderbolts.

From a 23-14 lead the Cranes’ Freedom Chiya blasted his way past the Thunderbolts blockers to register a 25-14 win to level the scores (1-1).

The Western Cranes’ strength at the net paid huge dividends as the Capetonians wrapped up the set with an impressive 25-15 win to take a 2 sets to 1 lead.

The explosive 4th set had all the ingredients of a top class final, power play and close scores had the fans on the edge of their seats.

With the scores at 24-19 the Thunderbolts caused a scare as they picked up two valuable points (24-21).

When setter Marshilino Julies connected with Ethan May at position 2 the left handed attackers exploded into action by unleashing a crushing blow to close the set with a 25-21 score line. Western Cranes wrapped up the encounter by 3 sets to 1 (25-27; 25-14; 25-15; 25-21).

The Eastern Cape teams have participated at national competitions over the years and as such have an advantage over newcomers, the Mapumalanga Buffalo at the prestigious National Volleyball League (NVL).

While Eastern Cape Eagles boast the presence of Peter Size, a former SA National team attacker and Yaseen Hendricks an up coming attack force in the Eastern cape region their fiery attacks were soon kept in check by the Buffalo blockers.

Keeping the score board ticking for the Buffalo were Thokozani Sibiya and Tebogo Ranala.

When the tightly contested opening set reached 13-13, Size and Hendicks turned on the heat against their opponents to grab a 25-17 win.

However things panned out differently for the Eastern Cape team as the Buffalo locked horns and pressurised Size’s men to a point of frustration. There were several well placed attacks and blocks that kept both teams in the hunt for a win in the hard fought 2nd  set.

Anxiety and heart stopping moments ensued as the points were tied  all the way to 27-27. Opportunistic attacking gave the Eagles a morale boosting 29-27 win.

While the long drawn out set took its toll on the players it was the more experienced Eagles that ended the 3rd set with a 25-22 score line.

Limpopo’s Mapungubwe Warriors can be proud of their performance albeit in defeat against the more experienced Gauteng Thunderbolts when they were edged out narrowly by a 25-19; 26-24; 27-25 score line in their NVL clash.

Thunderbolts’ veteran setter, Warren Siebrets used his vast experience to keep his attack force focused on the job at hand, that is to win the encounter despite facing strong challenges from the Limpopo lads.

The Warriors lived up to their name as they went on what was perceived as a ‘war path” as they were not afraid to attack at every opportunity that was  presented to them. Warriors’  attacking machine, Abramaham Mapharumela was a constant thorn in the side of the Thunderbolts. Jonas Otsweleng joined Aldren Mabila to keep the Warriors in the “war” game.

Thunderbolts’ Keifer Govender who was given the captaincy was devastating in attack. Jamine Naidoo piled on the pressure to help the Gauteng lads to wrap up the first set with a 25-19 score.

While the Thunderbolts attack force of Keifer Govender, Jamine Naidoo and Sandile Mabaso sparkled, Themba Rabi and Oscar Lukhele  took care of matters at the net. The explosive encounters between the two teams were savoured by the fans who cheered their favourite players on to greater heights. On the other hand Warriors’ power attacker, Abramaham Mapaharumela who was never afraid to ‘pull the trigger’ kept the score board ticking.

Not to be out done Warriors fought back and levelled matters at 23-23 largely through sheer power from Abramaham Mapaharumela and Jonas Otswelng whose opponents acknowledged their fiery display of power attacking with respectful nods.

Thunderbolts’ Sandile Mabaso stepped up to fire his team into the lead with a nail biting 26-24 end to the 2nd set.

The drama filled 3rd set kept the fans cheering for more as the players faced one another with venom as evident in the powerful attacks and rallies.

At a heart stopping 25-25 score line the set could have gone either way.

It was the Thunderbolts’ players experience at a high level of volleyball that saw them close proceedings with a 27-25 score line.