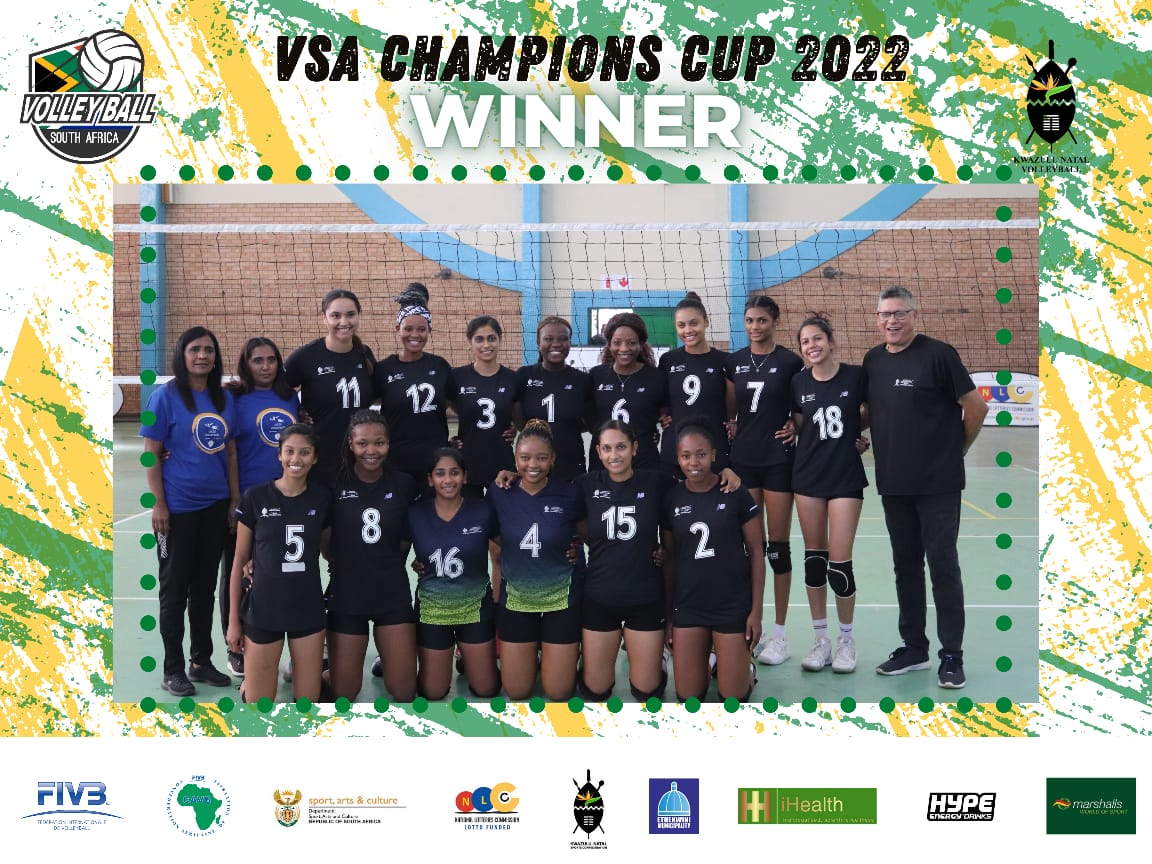 The Tongaat volleyball fans did not disappoint as they rocked up at the Tongaat Sports Centre in large numbers to support the KZN teams in the women and men’s final on Friday, 13 May. The once flood ravaged Tongaat Sports Centre came alive with scintillating volleyball action. The crowd showed their support by joining in the action by acknowledging top class volleyball not witnessed at the venue in the past few years.

Capitalising on the home crowd support Coach Marci Harold’s UKZN fought all the way to stay ahead in the match hoping to post a morale boosting first set win. UKZN’s memories of losing in the round robin stage to the Cape outfit made them more determined to turn the tables on their more experienced opponents. With Coach Marci instilling in them a ‘’mantra’’ ‘to believe in themselves’ paid off as UKZN registered a 25-19 win in the opening set.

Oozing with confidence UKZN entered the court for the 2nd set forcing UWC onto the back foot. Power hitter Itumeleng Motlokoa joined skipper Reyanka Kisten in action to keep the pressure on their Cape opponents. Not to be outdone UWC’s middle blocker, Tamlyn Thomas -stood firm in defence preventing the UKZN attackers from taking a run away lead. UWC setter Bejancke Della pitched in with well- tailored sets to give her attackers ample opportunities to take a much- deserved lead. Latching on to Della’s sets Brittany Daniels, the tournament’s MVP posted quick points on the board to take a 12-7 lead. A resurgence in the KZN team’s attack force levelled matters at 16-16. Taking the lead to 18-6 set the stage for a 2nd set win. Continuing on their winning ways UKZN closed proceedings with a 25-20 2nd set victory to lead by 2 sets to nil in a best of five sets final.

UWC led by their Coach, Ms.Elmien Cloete were not going to roll over and play dead against the local team that were in sparkling form. Undeterred by a partisan crowd urging UKZN to victory, the team from the Mother City kept focused on the job at hand determined to reach the podium as the gold medallists.

Their spirited fight back upset their opponents’ high riding spirits. Committing a series of unforced errors gave UWC a deserved 14-11 lead which they held on to to close the set a 25-18 margin to reduce their deficit to 1-2.

For UKZN a win in the crucial 4th set will result in them being crowned as the 2022 Champions Cup gold medallists. For UWC a win in the 4th set will give them hope of victory in the deciding 5th set. Hard work and good fortunes present in the UWC camp the closely contested 4th set was fought on a knife’s edge. The result could have gone either way when the scores were locked at 17-17. Sheer determination and the will to win put UWC in the driving seat to clinch victory with a 25-19 score line to level matters at 2-2. The battle to lift the coveted Champions Cup silverware and the winners’ cheque will be decided in the 5th set.

Whatever Coach Marci Harold ‘drummed into the ears of his young team seemed to have spurred them on to exciting the fans with an attacking and blocking strategy that brought loud cheering from the partisan crowd that gave the local team the boost that they required to start the 5th set on a high note.

UWC were seemingly overawed by the high tension ‘’do or die’’ 5th set and saw them facing defeat in double quick time when UKZN reached an unassailable 11-5 lead which they converted to a gold medal win by posting a 15-9 victory to become champions, a first for a KZN women’s team.