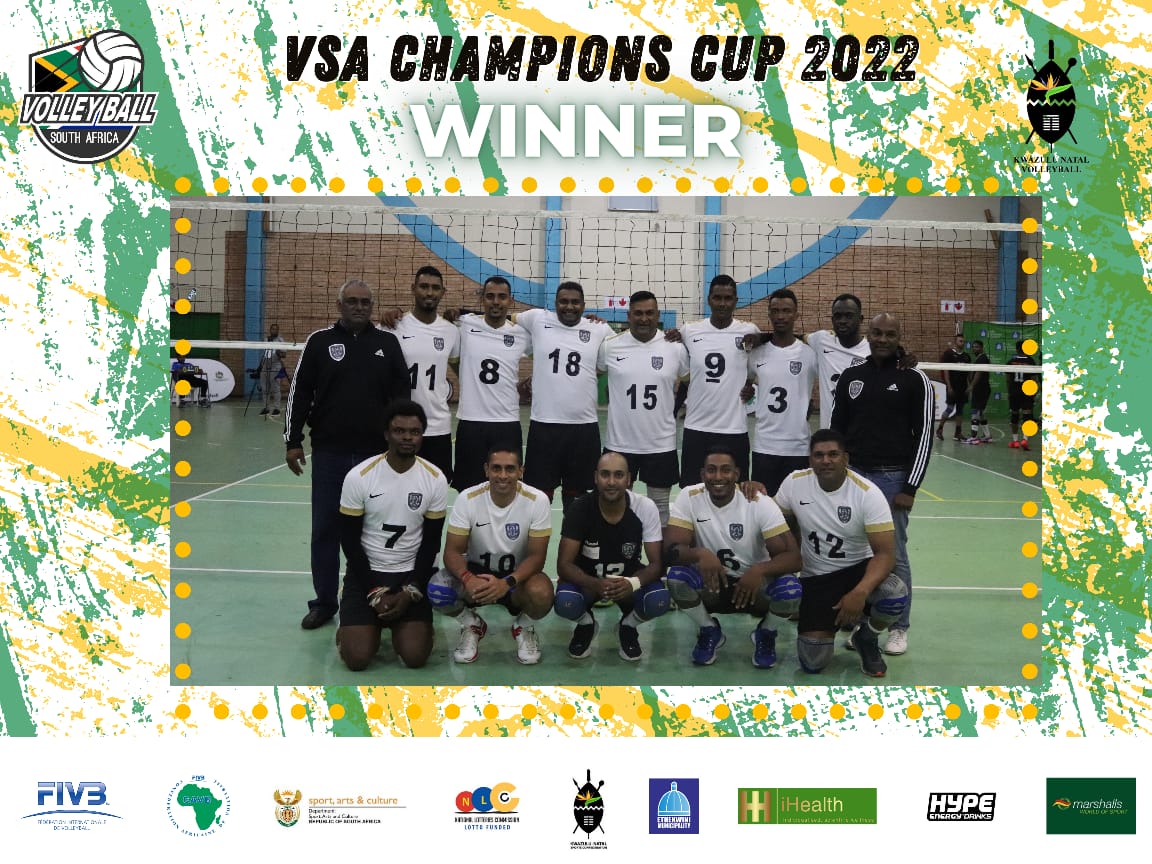 Billed as the clash of bitter KZN rivals, Predators, the 2021 Champions Cup winners squared up against a star- studded Lions outfit that set its sight on reaching the podium as gold medallists in the 2022 Champions Cup.

The all KZN men’s clash had the ingredients of a high intensity final that will be remembered more as a ‘’war on court’’ than a run of mill volleyball match. Such is the aggression that exists between the two teams whenever they meet on court.

When the first set began not even seasoned volleyball pundits could have predicted the outcome of the mighty clash between Champions Cup title holders and title hopefuls, Lions whose line up has been beefed up with the attacking duo of Terrance Chapidzinga and the lanky Tafadzwa Keni, both the from Zimbabwe, to wrestle the title away from Predators, their arch enemies. However, Predators put their faith in their skipper Quwin Naidoo, Reolan Ramdeen, Pregen Gungarajh and newcomer Tiro Otimile from Botswana to retain their title.

As expected, both teams ‘’set the court on fire’’ with their total onslaught strategy. While Predators playmaker, Sholen Govender who received the ‘best setter of the tournament’ accolade gave his attack force the desired sets to gain the upper hand in the scoring of valuable points, Lions’ setter Alvin Pather did likewise. The multitude of exchanges at the net thrilled and entertained the capacity partisan crowd. With the crowd applauding every attack, block and desperate attempts to recover balls that came of the blockers outstretched hands the score board was kept ticking evenly.

At 21-21 it seemed as if Lions would seize the moment and wrap up the opening set with a hard fought win. It was not to happen as Quwin Naidoo’s men surged ahead posting a 25-21 score to take a 1-0 win in a best of 5 sets final.

Once again, the battle ensued on court with great excitement as attackers and blockers fought with military style attack and counter attacks to gain the upper hand in a war of attrition. Poised on a knife’s edge at 23-23 the set could have gone either way. Opportunities existed for both teams to blast their way into victory. Predators were quick to step up ‘’to the plate’’ and sneak in with a 25-23 score line to take a 2-0 lead.

Realising the importance of winning the next two sets Lions raced to a 9-4 lead that Predators quickly took notice of and set in motion a containment strategy. Their efforts were rewarded when they narrowed the points difference to 17-19. When Predators’ Tiro Otimile effected a solid block on Lions Tafadzwa Keni it should have given Predators the edge to win the set and match from that point on. However at 24-19 Lions quick hitting Terrence Chapidzinga latched onto Alvin Pather’s well disguised set to hammer home the winning point to close proceedings with a 25-20 score line and claw their way back into contention (1-2).

In the crucial 4th set Alvin Pather’s boys took a quick a 5-1 lead to remind Predators that they were still in this ‘’bloody encounter’’ to lift the Champions Cup silverware. Lions dominated the set with their trade mark power volleyball. They went on to level matters (2-2) with a 25-16 in the 4th set win.

In the deciding 5th set both teams could not be separated as they relied on a total onslaught strategy to find a ‘’chink’’ in each other’s armour and kept the score board ticking evenly. At this stage an untimely injury to Predators’ setter Sholen Govender raised the alarm in their camp as Govender was pivotal in keeping his attack force well supplied with quality sets to retain the championship title.

Skipper Quwin Naidoo stepped into Govender’s shoes to keep their hopes alive for victory. At times the set had its fair share of nerve wrecking moments. One such moment was at 13-13 when Lions’ lanky Tafadzwa Keni stopped Predators Reolan Ramdeen ‘dead in his tracks’ at net with a well- executed block to give Lions a 14-13 lead.

At 14-14 Lions’ Tafadzwa Keni turned from hero to’ villain’ when he ‘dumped’ a ‘free’ ball that struck the tape of net and fell back onto Lions’ side of court handing Predators a 15-14 lead. Predators fans erupted in a frenzy when their team posted a 16-14 win against Lions, their arch rivals. Both players and fans celebrated their hard fought win to retain the Champions Cup title and walk away with the winners’ prize money.