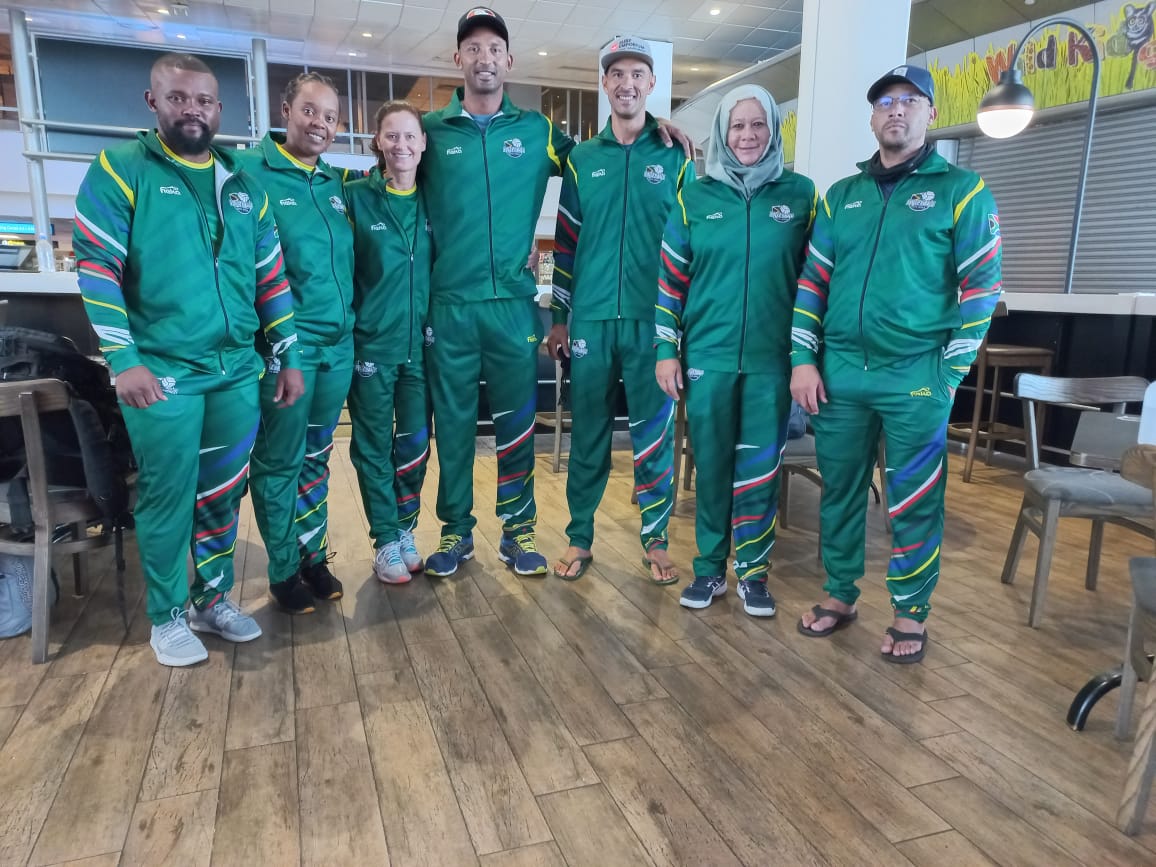 The SA beach volleyball teams jetted off on Tuesday 22 March to Ghana for the African leg of the Commonwealth Games Qualifier scheduled to take place in Accra from 24 to 28 March.

Billed as the African continent’s most fiercely contested beach volleyball event on the CAVB calendar fans who rock up at the event can expect mouth-watering encounters from the continent’s best players as they pull out all the stops to get their share of the prize money and walk away as the competition’s gold medallists.

To this end VSA Vice President Mike Makhubela who oversees the National Federation’s beach volleyball portfolio rang up the changes in the SA men’s team after the players who represented SA in the first zonal beach volleyball event in Mozambique withdrew on medical grounds.

Capetonian Grant Goldschmidt, a veteran of many national and international competitions was brought in to beef up the men’s team that will be involved in gruelling encounters in order to emerge as winners in the African leg of the qualifier for the Commonwealth Games in Ghana.

Goldschmidt the left- handed maestro is arguably the best beach volleyball practitioner on the South African beach volleyball circuit that was abruptly brought to an end because of the Corona Virus pandemic. Grant according to his former coaches is immensely skilled, possessing a ‘’volleyball brain’’ that allows him to quickly  read his opponents’ strategies and plan accordingly to contain them at the net and post quick points on the board.

Joining Grant in boosting South Africa’s chances of ending the team’s elusive gold medal podium placing is the lanky and strongly built Leo Williams who plies his trade on the European beach volleyball circuit. With the Czech Republic as his adopted home Williams is a regular contender on the European beach volleyball circuit that has contributed greatly to sharpening his blocking and attacking skills.

Currently Leo is the country’s highest ranked player. To this end it does not come as a surprise that South Africa’s hopes of victory in the West African country rests on Williams broad shoulders and the synergy that exists between the Capetonians.

Attaining a 3rd place in the women’s competition at the inaugural Zone VI beach volleyball tournament hosted in Mozambique has fired the South African pairing of Palesa Masinga and Natasha Webber to go the extra few kilometres do their own training in addition to the national team set up to come up to speed to compete at the continental level.

Palesa brings to the team years of experience as both an outstanding indoor and beach volleyball player on the national and international arenas. Masinga is blessed with strength at the net as a blocker and a clinical power attacker.

Natasha Webber is no stranger as a player in national and international competitions. Winning the coveted Most Valuable Player accolade at VSA’s 2021 Champions Cup has been a morale booster that prompted Natasha to spend more time in the gym and the courts to keep her on the national team roster.

The SA ladies say that they are ready for a fight for their country on Accra’s picturesque sandy beaches to scoop the top position.

In wishing the SA team bon voyage on Tuesday VSA President Anthony Mokoena conveyed his good wishes and was hopeful that they will proudly fly the South African flag in Ghana and at the same time be ‘’ambassadors’’ for VSA and South Africa.