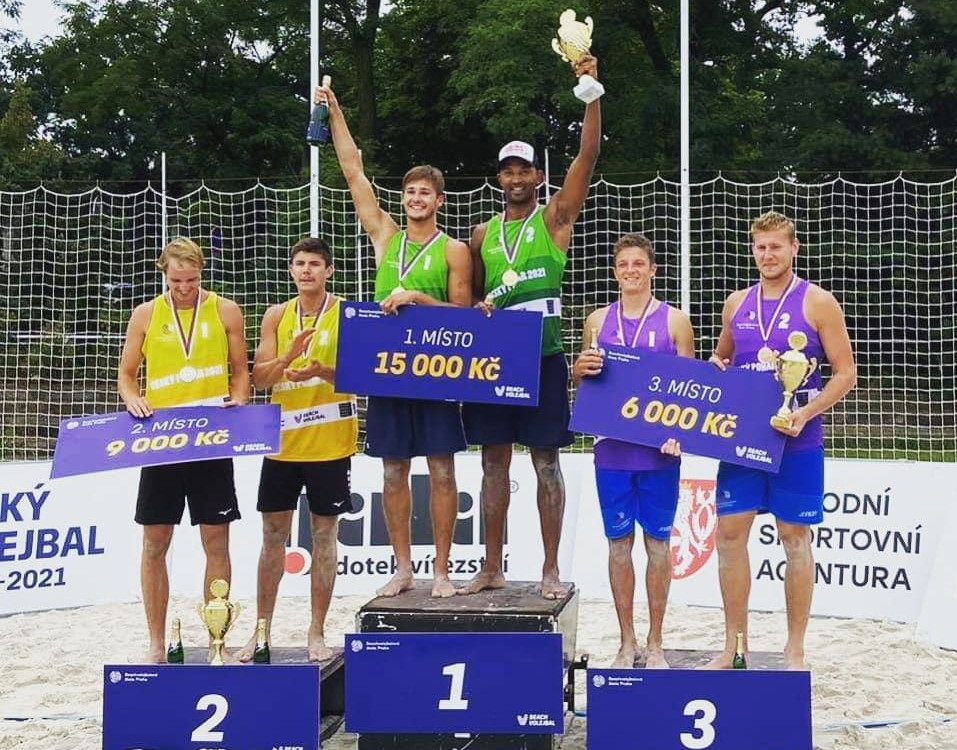 Brushing aside the disappointment of failing to qualify Team South Africa for the Tokyo Olympic Games crestfallen veteran beach volleyballer, Leo Williams headed back to his adopted country, the Czech Republic to “recharge his batteries” and get back to his winning ways on the European Beach Volleyball circuit.

While a 2 – star beach volleyball event does not attract the “big guns” of the European circuit it nevertheless was manna from heaven for Williams and his 20 -year old Czech partner, Tadeas Trousil who grabbed the opportunity for a chance to notch up a morale boosting victory.

The new pairing played 6 matches losing once in the round robin stage.  Williams and Trousil had to fight all the way to register a hard fought 2-0 win (21-19; 21-18) against the strong pairing of David Lence and Jan Stefko in a “do or die” quarter final match.

For both teams the semi-final encounter was a real test of endurance and the skillful use of power and deft touches into the opponents’ court to notch up a victory and head into the finals. Fired up Williams and Trousil wrapped up the opening set with an impressive 21-13 win which seemed to sound the death knell for their challengers.

However the goings became increasingly tough in the 2nd set for the South African and his partner Tadeas Trousil who pulled out all the stops to prevent  Knoblock and Kittel registering an upset win against them. Refusing to be intimidated by Williams’ towering presence at the net, Knobloch and Kittel posted a heart stopping 21-19 win to force the match into a deciding 3rd set.

Squaring up to the pairing of Jan Mrkos and Frantisek Pihera in the Czech Republic National Finals Williams and Trousil were circumspect as they lost to their challengers in the earlier rounds.

The crowd -pleasing encounter had all the thrills of an evenly matched final.

With both teams being well supported by the capacity crowd Williams and Trousil drew first blood when the opening set score was dead locked at 19:19. A well- executed  block by Williams followed by a clinical spike into the far reaches of the back court gave them a breath taking 21-19 first set win. Paying heaving for lapses in confidence Williams and Trousil succumbed to a 19-21 2nd set loss. Fought on a knife’s edge the deciding 3rd set was captured by Williams and Trousil by a 15-9 score line to reach the podium as the champions of the Czech Republic National 2 Star Beach Volleyball Tour

The former Capetonian will be heading to Austria to compete at the Wolfurt Trophy with his new partner, Robert Kufa.