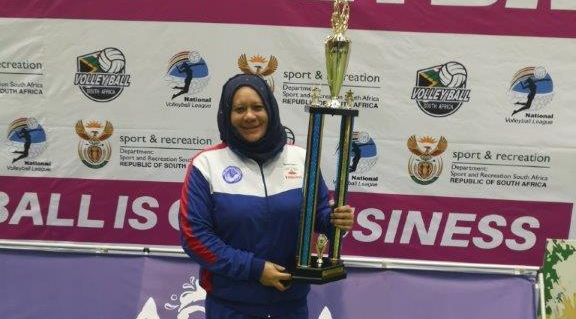 The SA National Beach Volleyball team (with Gadija Jappie as head coach) is expected to battle on the second leg of the Tokyo Olympics Qualifications, a remarkable highlight in Gadija’s Volleyball Career. Gadija’s appointment surprised many, though a great move for SA volleyball on transformation, a women has never been appointed as the head coach for a Senior SA team until now. She has been tasked with the responsibility of making sure that the SA beach volleyball team is victorious at the Olympic Qualifications. Gadija was born and raised in Port Elizabeth in Eastern Cape but currently stays in Western Cape. Jappie started playing volleyball in 1990 for the Eastern Cape province and she later moved around the country playing for teams based in Eastern Cape, Western Cape and Gauteng. Gadija was shocked and excited at the same time after receiving the call from Volleyball South Africa to take on these great responsibilities and she is ready to represent women in Sport and the country at large.

The Volleyball South Africa’s Media & PR Director Jacob Thamaga asked her few questions and this is how the talk unfolded:

1.      How did you feel after being called by VSA to take on the position as the head coach of the SA Beach Volleyball Team which is on a campaign trail for the Olympics Qualifications?

I was surprised! A female has never been called up as Head Coach for a senior SA team before, so I had to double check that it was indeed true that they were appointing me as the head coach. But I was super excited for the opportunity as it was quite progressive of VSA and a big win for women in sport.

2.      Do you think that the SA Beach Team will make it to the Tokyo Olympics?

Well, we are in the running, so we stand a good a chance like any other country. We will take one step at a time. We have breezed through the first qualification round and next is to end in the top 2 to qualify for the Continental Cup. It will be a tough road as the African teams are strong and Africa only gets 1 spot in the Olympics. We have got a lot of work to do to get to Tokyo, but we are in it to win it – there is no other goal in mind.

3.      What kind of support is required from the business sector, potential sponsors and fellow South Africans towards the Olympic Qualifiers?

No doubt we will need financial support as well as exposure and support from the country as a whole. Sport has always been something which brings our country together as a nation and I would like our journey to the Olympics to be just that. I would want the teams to get as much international exposure as possible as we move through the qualification process leading up to the Olympics. A well planned path in this regard is expensive, so getting the business sector and sponsors to support us would allow us to do our best without having to be concerned about how to get there.

4.      What were your remarkable highlights when it comes to Volleyball?

It is difficult to pick just one in a 30-year career! So many wonderful moments. Volleyball as a whole has been one major highlight in my life. As a player I would have to say our performance at the 1999 Indoor All Africa Games. We played in the semi-final, ended in the top 4. This was the best result we have had up to that point in SA Volleyball. The tournament was in Johannesburg (SA), so we had the home ground advantage. It was amazing!  As a coach, definitely being the first woman to be appointed as the Head Coach for SA National team. I am excited that I am to represent the amazing women in volleyball, but more importantly, to represent my country and hopefully make them proud.

Her coaching career highlights are as follows: