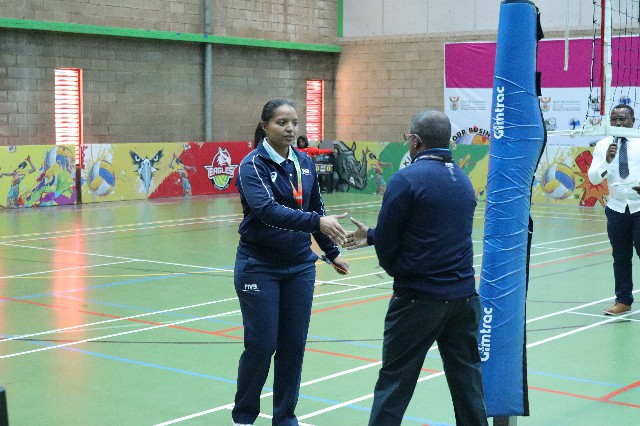 Tania Lewis is still the SA Volleyball’s leading referee and the first South African female referee who is internationally accredited. The 45 year old was born in Worcester and currently resides in Cape Town, Western Cape.

Tania’s interest in refereeing started at grassroots level where she found herself refereeing local and provincial games. Even though women were not favored in terms of officiating volleyball matches, Tania stood firm to do what she loves most which is taking control of the game. Her passion for refereeing volleyball matches eventually developed to a point of being a referee at the National Club Championships  and Inter-Provincial Tournaments (IPTs).

Lewis’s love and passion for the game pressed her to follow and attend the domestic referees courses organised by Volleyball South Africa (VSA). Her journey was graced when she was sent by VSA to attend the international referee’s course which took place in Kenya in 2014 which she passed with flying colors. It was godsent for Tania to be motivated by the former FIVB President of Rules and Referees, Mr. Hassan Mohamed who realized the potential for her to become a highly recognized referee and advised her to embark on a journey to become an FIVB accredited referee.

Apart from having reasonable track record of involvement in volleyball as a referee, Tania was expected to officiate 3 international matches under the supervision of FIVB referee instructor in order to become an FIVB accredited referee. Tania was courageous to undergo the process of becoming an FIVB referee in 2016 where she officiated international matches in Namibia after. Thereafter, her application was forwarded for assessment. A year later in 2017, she was struck with exciting news from the FIVB that her application to become an FIVB accredited referee was successful which is one of the remarkable highlights of her career as a female referee. Tania’s dream is to be nominated for FIVB events in future and to qualify to officiate Olympic games.

Some of Tania Lewis’s highlights are as follows: