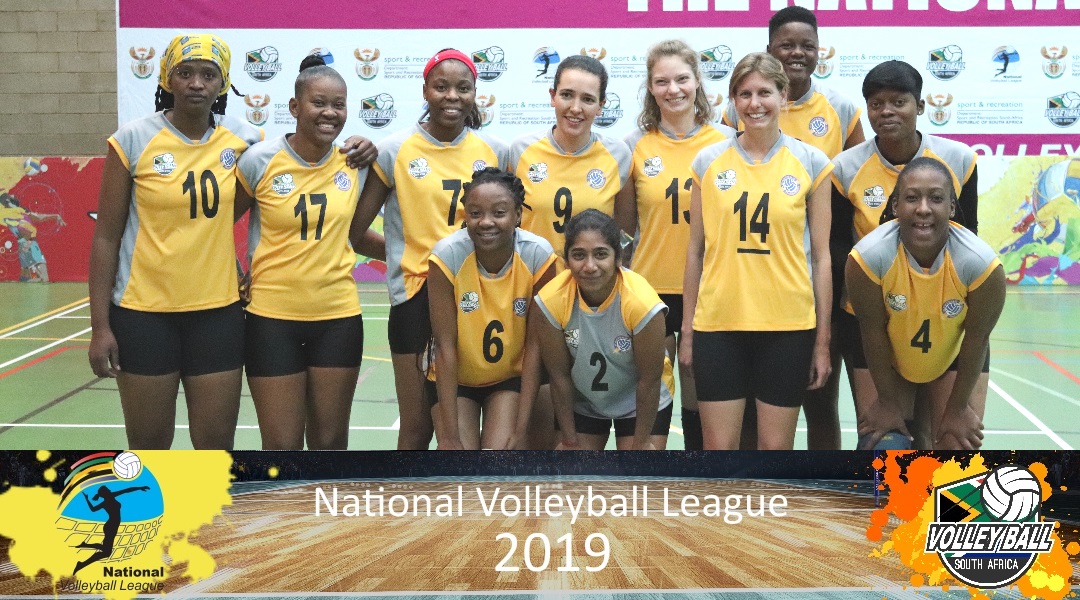 Hailed as one of the greatest women’s finals in more than a decade, the 2019 NVL clash between Gauteng Thunderbolts and defending champions the Western Cape Cranes  from the Mother City thrilled and entertained the capacity crowd at the Kempton Park Sports Centre.

Despite the many  challenges  faced  by Gauteng Volleyball Union they did exceptionally well in putting together a women’s team that went on to wrestle the 2019 NVL title away from the Cranes,  the defending champions and favourites  to lift the coveted silverware at the medal presentation ceremony.

The star studded Western Cranes had an excellent blend of youth and seasoned campaigners at this level of competition. Former SA National team middle blockers, Roxanne Fourie and Sandra Freeks were included in the Cranes’ line up to beef up their defence at the net.

Billed as the tournament favourites the Western Cape Cranes lived up to their reputation and took a commanding lead in the opening set, giving their opponents little or no room to manoeuvre around the huge blocks of Sandra Freeks.. Cranes had the benefit of sparkling service from playmaker, Lamees Martin whose nimble fingers became a launching pad for a number of sets that were converted to points by her prolific attackers. However, poor service reception by the Thunderbolts back court players gave their diminutive setter Tshidi Dlamini limited options to work with in creating attacking options. At 24-18 Cranes’ outside hitter, Anetta Frederiksen latched on to a quick set from Lamees Martin to ‘wipe’  the attack off the blockers’ hands to take the first set with a 25-18 score line.

Losing the first set made the Gauteng lasses determined to make an effort to turn the tables on their opponents, which they knew can only happen by a co-ordinated attack and block strategy. Realising that winning the 2nd set  was crucial for their survival in the final the Thunderbolts  surprised their opponents by taking a quick fire 6-2 lead largely through their tall, lean and quick hitting Nelia Tembe. The court  became the scene of drama filled action when the Cranes fought back to claw their way back into contention. Long rallies became the order of the day and crowd support reached fever pitch. Enjoying crowd support the Cranes took a slender 18-17 lead for the first time. Thunderbolts Anna Phago turned on the magic as she exploded in to action with powerful cross court attacks that kept her team ahead on points. Overcoming repeated attacking and blocking combination from the Western Cranes , Phago blasted home the crucial spike that sealed the set at 25-23, to level matters at 1-1.

Not to be out done, the defending champions stepped up a few gears through the efforts of Randy Williams, Brittany Daniels and Anetta Fredericksen  who connected well with Lamees Martin’s perfect sets to stay ahead in the set. The Thunderbolts’ skipper Nicky Wenhold marshalled her troops to level matters at 21-21. The tall and imposing frame of Sandra Freeks stopped the Thunderbolts middle attackers ‘dead in their tracks’ by picking up two consecutive points with her huge blocking action.. When the scores reached 24-21 in favour of the Cranes, Brittany Daniels powered her way past the Thunderbolts blockers to post a 25-21 win to take a 2-1 lead in a best of 5 sets final.

Once again it was the Thunderbolts Anna Phago who swung into action taking her team’s power play on her shoulders. Joining Phago in attack were Nelia Tembe and  Ntsoaki Moloisane who combined well to post valuable points on the board. Taking a 16-13 lead despite facing a barrage of attacking and blocking combination play  from the Cape side, the Gauteng lasses stayed ahead on points. A series of silly errors by the Gauteng team brought the Cranes back into contention. However it was Anna Phago and the quick hitting Nelia Tembe who combined with aggression to post a morale boosting 25-20 win to force the final into a deciding 5th set.

Despite  Thunderbolts’ Lerato Sebeya having an unenviable record of having the most number of service errors in the final, the Gauteng team raced to a 6-2 lead. The Cranes efforts to close the points gap through Daniels, Williams and Frederiksen did not pay off as they planned as a splendid back court cover play by the Thunderbolts’ libero, Keshnee  Moodley who raced to pick up spikes and balls that came off her blockers hands put a damper on them. Had it not been for Moodley’s brilliance in the back court the Cranes would have gained the upper hand and won the deciding set.

At 12-10 the Thunderbolts delighted their fans when they scored two consecutive points (14-10) that stunned the Cape fans who expected the worst as the points difference was too great at this crucial stage. A quick attack from the Cranes’ Randy Williams to beat the opposition blockers floated out of bounds. The Gauteng fans rose in celebration in the stands while the Thunderbolts players raced around the court wildly waving their hands and exploding with joy. The Gauteng fans joined their team’s on court celebrations and jived to DJ’s selection of local music.

The Gauteng Thunderbolts won the breath taking 5th set by a 15-10 margin to march to the podium as the 2019 National Volleyball League (NVL) gold medallists.