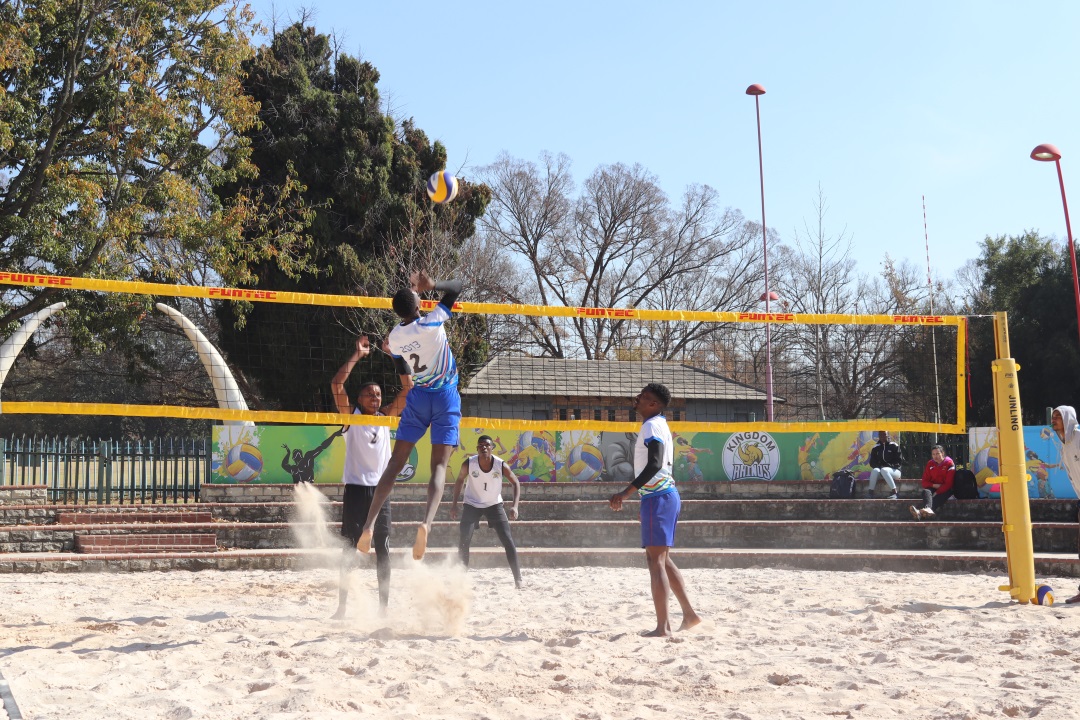 Once again the Western Cape women’s team had a stranglehold on the 2019 NVL Beach Volleyball Competition as they powered their way past their opponents to the finals against Gauteng Thunderbolts at the Dries Niemandt Amphitheatre in Kempton Park on Saturday, 6 July.

Challengers Gauteng Thunderbolts’ Khutso Letsoalo and Samkelisiwe Sibiya had their work cut out  from the first whistle as they had to dig deep in their reserves to try to upset the tournament favourites, Bejancke Della and Christin Delcarme from the Mothe City.

With the opening set being closely contested up to the 13 point mark the Gauteng ladies’ hopes of an upset victory soon began to fade as fatigue began to set in. The Cranes Bejancke Della’s crafty setting and skilful use of ungurded spaces on their opponents’ court further drained the Thunderbolts as they fought to ‘stay alive’ in the set. When ever Christin Delcarme connected with Della’s tailor made sets a point was posted on the score board. The Capetonians won the opening set with a 21-16 scoreline.

It came as no surprise when the Western Cranes youngsters Lukholo Jooste and Aviwe Mamfanya who represented South Africa at the World Junior Championsip in 2018 reached the final against the hard hitting Gauteng Thunderbolts, Nathi Ntumbu and Lunga Vilakazi.

Taking a quick 4-1 lead in the opening set put the Western  Cranes in the driving seat. However a series of unforced errors in pressure situations by the Cranes levelled the scores at 6-6. With the Thunderbolts focusing on the Cranes’ Jooste who seemed to have suffered lapses in concentation the former raced to a 13-8 lead. Strong blocking and clinical finishing gave the Gauteng lads a well deserved 17-10 lead. When ever Nathi Ntumbu rose to connect with a set the spectators knew he would bury the ball with with his brand of fury in to the sand. When crestfallen Aviwe Mamfanya’s service failed to clear the net it sounded the death knell for the Capetonians when score reached 20-10. No nonsense power attacker, Nathi Ntumbu’s sizzling cross court spike left the Capetonians stranded in the back court. The Thunderbolts went on to end the first set with a 21-11 win.

In the crucial 2nd set  three consecutive errors by the Cape side forced them against the ropes. Taking advantage of their predicament the Thunderbolts took the fight to Jooste and Mamfanya. The Capetonians seized the challenge and fought back often resulting in long drawn out rallies that excited the crowd who joined in the action with loud cheering.

In the end it was the Tunderbolts’ quck combination play and strong blocking that sealed the set for the Gauteng lads at 21-9, the score not being a true reflection of the quality of the match. Nathi and Lunga reached the podium as the 2019 NVL Beach Volleyball gold medallists.