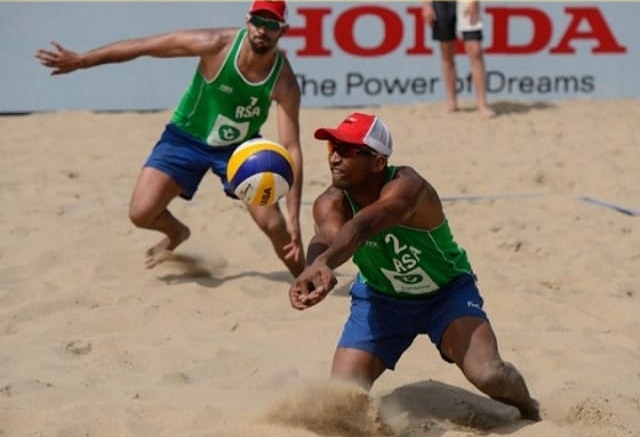 South Africa’s prospective candidates for the 2020 Olympic Games , Capetonians Grant Goldschmidt and Leo Williams wrote their names in the history books on Friday (8 March) when they became the first beach volleyball pairing from the African Continent to reach a final on the FIVB Beach Volleyball World Tour. The South Africans set themselves up for a final show down after an energy sapping Tour in Kg Speu in Cambodia to square up against the more fancied Russian pairing of Maxim Sivolup and Artem Yarzutkin.

The road to the main draw in KG Speu , however, was a challenging one that tested the SA pairing’s mettle to the fullest.  The comprehensive  straight sets win (2-0) (21-11; 21-8) against the more fancied Lemke and Matthews from the United States’ in the opening match of the qualifiers in spurred them on to make it to the lucrative main draw regardless of the obstacles they faced. Brushing aside the Canadian duo, Fecteau-Boutin and Reka with a 21-12; 21-18 score line, Goldschmidt and Williams faced their toughest challenge when they met Poland’s Adrian Sclebel and Piotr Ilewicz in the final match in the qualifier.

South Africa’s win in the main draw against the Czech Republic’s Sramek and Samec in straight sets (2-0) (21-17; 21-12) raised more than just eyebrows from the rest of the contenders in the main draw, especially the Americans, Burik and Sutterfield who were set to meet the “on fire” South Africans in the quarter finals. The strength of the Americans at the net was not enough to unseat the SA pairing who went on to win the opening set with a hard fought 22-20 margin and there after close proceedings by picking up valuable points with well co-ordinated blocks and clinical finishing at the net. Goldschmidt and Williams posted a 21-18 score to head to the semi final stage for the first time.

With fatigue setting in the South Africans threw caution to the wind and buckled down to take the fight to the Austrians hoping to “draw first blood” that would force their opponents onto the back foot. Their efforts paid off as they won the opening encounter by a 21-18 margin. Unable to continue with their winning ways the South Africans saw the 2nd set slip through their fingers. Austria’s Moritz Fabian Kindl and Arwin Koschar capatalised on their opponents lapses in concentration and stretched their lead giving the SA pairing no chance of upsetting them, The Austrians went on to confidently wrap up the set with a 21-12 hiding.

With the semi-final poised on a knife’s edge the Austrians were oozing with confidence more so as the South Africans were crestfallen after their poor performance in the 2nd set (21-12).

From the first whistle in the crucial 3rd set Goldschmidt and Williams dug deep in their resources to tighten their defence at the net and mix deft touches with awesome power that threw the confident Austrians’ game plan into disarray. The South Africans romped home in the entertaining 3rd set with a 15-8 score line to reach the FIVB Kg Speu Final in Cambodia.

Coach Gershon Rorich, a Beach Volleyball Olympian (Athens 2004) was beaming with pride as his young charges defied all odds to set themselves for a titanic battle against the more experienced Russian pairing of Maxim Sivolup and Artem Yarzutkin in a FIVB World Tour final scheduled for Sunday, 10 March.

“ This is a great achievement for Grant and Leo and the National Federation as we invested in developing talented players over the years and we are reaping the rewards of our investment”, said Rorich who also serves as the Beach Volleyball Director on  Volleyball South Africa’s executive.

When news filtered through back home of Goldschmidt and Williams making into the FIVB World Tour Final in Cambodia there was an outpouring of congratulatory messages from the National Federation executive, wellwishers and the volleyball fraternity on social media.  Heading the list of well wishers were VSA President Anthony Mokoena, former VSA President Tubby Reddy, Attorney Siven Samuel President of VSA Legal Commission who said: “ Well done Gershon and VSA. This will catapult the sport to greater heights and will be a  ‘shot in the arm’ for VSA’s development plans”.