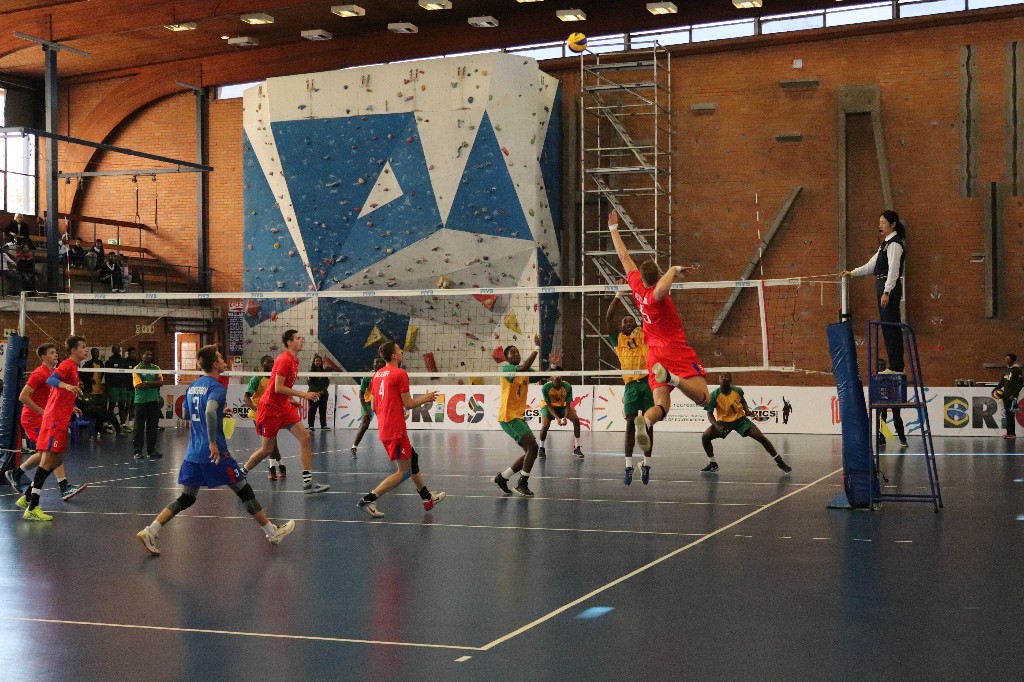 Confident of victory against the South Africans in the final match of the tournament the Russian Head Coach, Nikolaev rung the changes resting three (3) of his main players, giving 2nd string players, Balashov, Kovalchuk and Zakharov the opportunity to make their debut in the competition.

Zarharov and Balashov were particularly impressive as they struck the ball with sheer venom that brought respective nods of approval from the partisan crowd and the South African bench. Racing to 21-7 lead the South Africans had no answer to the speed and power of the Russians. However SA attackers, Andresa Nonkonyane, Mtsheni and Tshenolo Otsweleng had a measure of success but it was not enough to ruffle the Russian feathers.

With Russia dominating at the net they raced to a 9-2 lead in the 2nd set with Zarharov , Balashov and Kovalchuk in sublime form. The fans shrieked with delight every time Balashov pounded attack after attack to close the set with a 25-9 score line.

Raising the level of their performance to salvage some pride the South Africans struck back through the hard hitting Mtsheni, Otsweleng and Nonkonyane. They had the support of the local fans who encouraged them all the way.
Levelling the scores at 5-5 gave the South Africans renewed hope of challenging their more fancied opponents. Russia’s solid blocking both in the wings and the middle put paid to SA’s chances of an upset win in the set. Despite the set back the South Africans managed to post a few valuable points to make the score more respectable (20-11)

Howevr, when Zakharov unleashed a few punishing “rocket” jump serves and later followed up with powerful attacks from the wings it sounded the death knell for the SA lads. The SA team lost the set by a 25-16 margin.