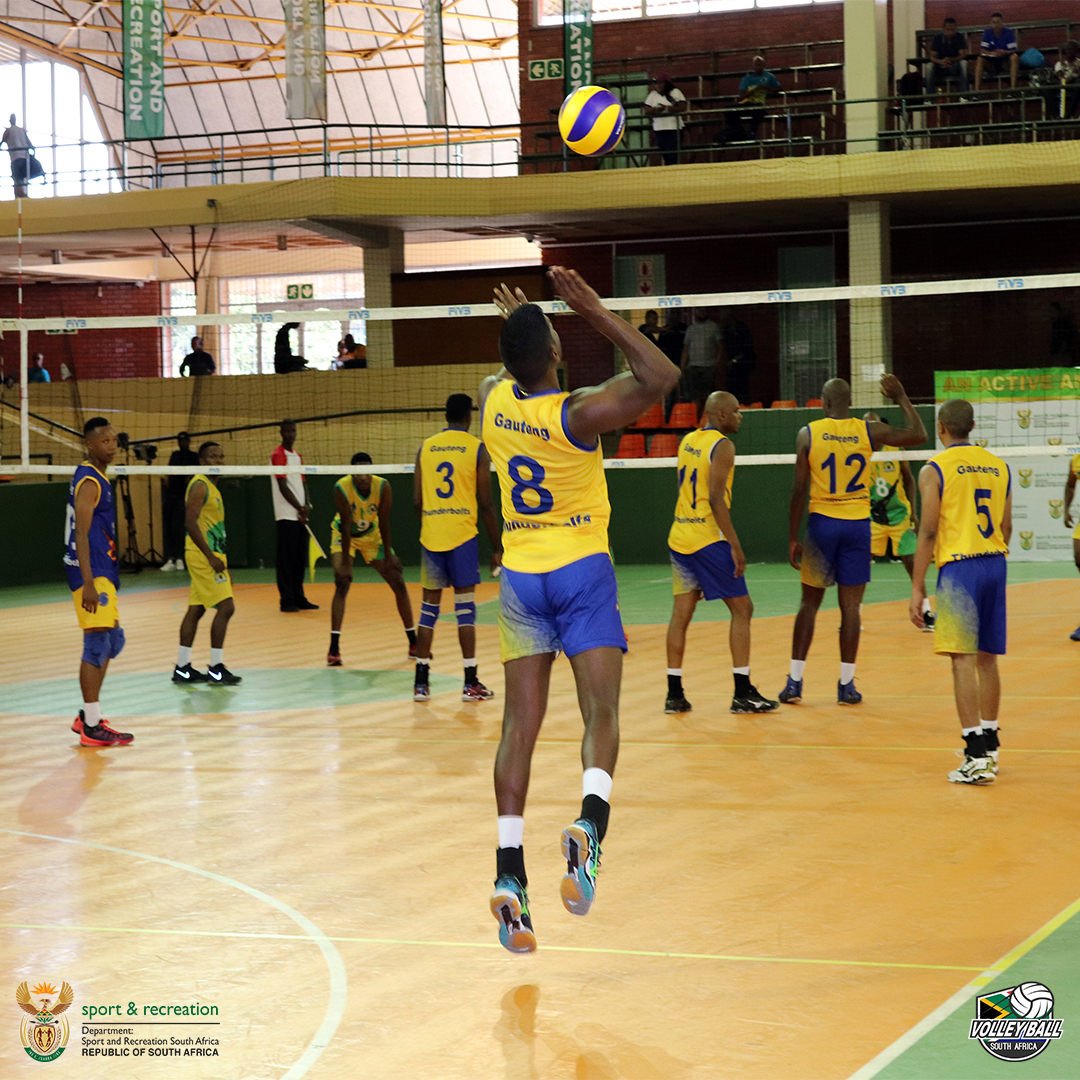 Northern Cape’s Diamond Kudus’ chances of registering their first win at the NVL against North West Dynamites slipped through their fingers by a lack of creativity by the setter, Boitshoko Mondane that would have given his attackers a variety of attacking options which are demanded at this level of competition to put the opponents under pressure and score valuable points.

Having lost against Western Cranes and the EC Eagles, the North West team pulled out all the stops to record their maiden win before they make the long journey back home.

Although there was nothing explosive in their offensive play except the occasional power attacks from Reggy Phumo Dynamites went on to take the first two sets with a 25-16; 25-16 margin which was a massive boost to the team’s ailing morale.

In the ‘do or die’ 3rd set Diamond Kudus shocked their opponents by taking a runaway 11-5 lead, courtesy of good attacking from skipper Michael Smith and Kagiso Makatong. While Smith and Makatong posed several problems for the Dynamites they were soon contained as their lead was gradually reduced when the Dynamites upped their game.

At a heart stopping 22-22 Diamond Kudus committed two unforced errors that raised the hopes of Dynamites for a straight sets win.

When Kudus’ skipper Michael Smith rose to connect with a well placed set he chose to sacrifice control for power. He fired the attack out of bounds which handed the set to the North West Dynamites by a 25-23 margin.

Dubbed the match of sheer power play, the players did not disappoint as the crowd roared in approval of every spike that hit the floor or flew off the block and sped out of bounds. With crowd firmly in support of action packed rallies the players rose to the occasion to entertain the fans.

EC Eagles’ former national team player, Peter Size used his experience to hold his team together and focus on putting points on the board. Taking the fight to the

FS Giants paid off for the Eagles as they took the opening set with a 25-21 margin.

FS Giants entered the court for the 2nd set determined to turn the tables on the more experienced EC Eagles. Taking a quick 5-1 lead through hard hitting Lemohang Passa and Koali Passa forced the Eagles onto the back foot.

The continuous flow of  powerful attacks and blocks was the order of the day. The excitement filled set had the potential of being ‘captured’ by either team as very little separated them in power play.

After the scores were levelled at 13-13 it was Peter Size and Yaseen Hendericks who put their team in the lead with clinical finishing.

With both teams revelling in the enormous crowd support the encounter became explosive with breath taking rallies, punishing attacking and solid blocking.

At 26-26 the crowd held their breath as the score board kept ticking a point at a time for each team. At 29-28 in favour of the Free State team Peter Size rose to dink the ball which failed to cross the net handing the Giants a much deserved win with a

Determined to register their second win at the NVL the EC Eagles dug their heels in deep to contain the Free State attackers and keep the score board ticking.

The final match of the first weekend fixtures of the National Volleyball League(NVL) between the home side, Kingdom Rhinos and the Mapungubwe Warriors from the Limpopo Province was a strongly contested encounter that was won by the Kingdom Rhinos in straight sets, 25-20; 25-17; 25-21.

The Rhinos’ 3-0 victory belies the intensity of the match as the Warriors who headed the log standings by winning their first two matches faced their opponents like “Warriors” on a war path to annihilate their opponents.

The ensuing ‘fireworks’ had the fans on the edge of their seats.

When the scores tied at (20-20) Rhinos’ skipper Quwin Naidoo marshalled his troops and got them to focus on the work at hand, to win the encounter.

Sandile Khoza and Preegan Gungaraj rose to the challenge by joining their skipper Quwin Naidoo to post a hard fought (25-20) win.

Warriors’ captain and setter,Matsobane Lefawana  had his work cut out as he soldiered on to create as many attacking options as possible to exploit the weakness of his opponents. Fighting toe to toe the Warriors were in the hunt to score quick points to stay ahead in the set. Great rallies were the hall mark of the set. Crowd participation was very encouraging.

Rhinos’ Coach Jason Govender threw his back- up setter, Ryaan “Spitz” Lahldas, a veteran national team setter to break the 12-12 deadlock in the 2nd set scores. Lahldas did not disappoint as he quickened the pace of his sets that brought the best out of attackers Sandile Khoza, Preegan Gungaraj, Yuvir Ramjit and Quwin Naidoo to close proceedings with a 25-17 margin.

Continuing with their winning ways Kingdom Rhinos kept the pressure on their Limpopo counterparts to win the 3rd set by a 25-21 score line.