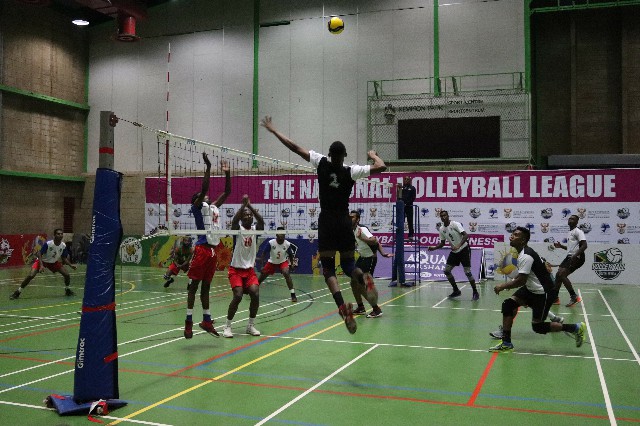 At the end of the 2nd weekend’s fixtures of the 2019 National Volleyball League (NVL), front runners KZN Rhinos and Western Cranes have made it plainly clear to the rest of the field that they will be contesting the Gold Medal match in the men’s category.

The Rhinos opening fixture of the tournament against Eastern Cape Eagles was a hard fought encounter, with the Rhinos squeezing through the first set with a 29-27 win. After having lost the 2nd set to the Eagles by a 18-25 margin the KZN lads stepped up a few gears to wrap up the match with a 25-20; 25-18 win.

On the other hand the Western Cranes thrashed the North West Dynamites in straight sets, 25-15; 25-10; 25-11 to register their first win. After a tightly contested first set in their 2nd match  against the Free State Giants , the Cranes stepped up to the plate to put the set beyond their opponents with a  25-23 margin. The Cape side closed proceedings with a    25-19; 25-14 victory to head the log standings.

In their 2nd encounter against Mpumalanga Buffaloes the KZN lads had to fight all the way after having taken a convincing  25-15 first set win to edge out a rejuvenated Buffaloes by a 25-23; 25-22 margin. KZN’s clash against the Mapungubwe Warriors was a mouth watering encounter which could have gone either way. It was the experience and strength of the Rhinos that saw them through with a 25-23; 25-22; 25-19 win to record their 3rd straight win.

In the match between Western Cranes and the Gauteng Thunderbolts the  members of the public could have easily mistaken the encounter as a final as both teams kept the score board ticking with explosive power attacks and solid blocking that had the crowd on the edge of their seats. The Western Cranes emerged victorious  with a hard fought 25-22; 25-23;    25-23 win to end up unbeaten like their arch rivals KZN Rhinos.