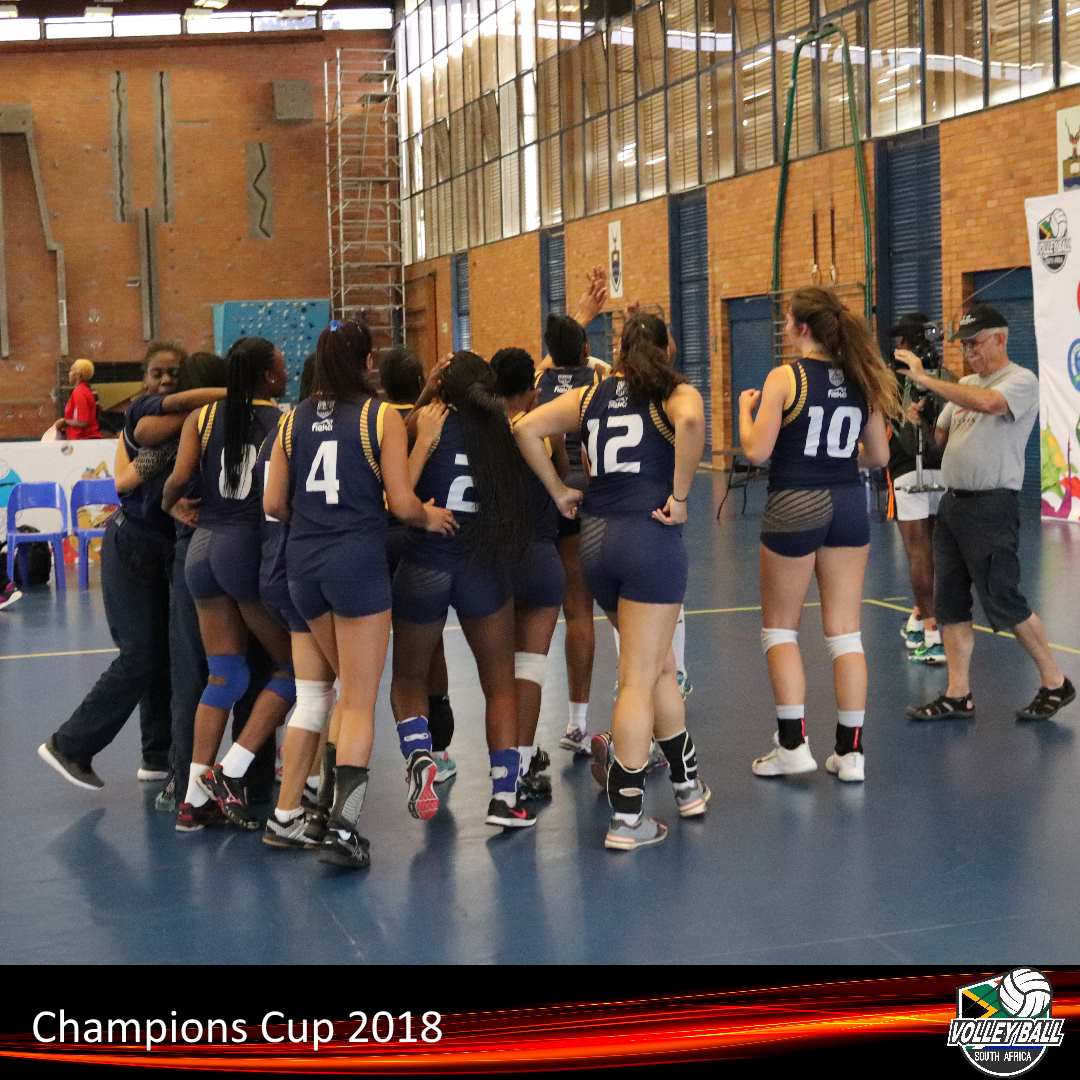 Not in the nineteen year history of the Champions Cup, Volleyball South Africa’s premier inter club championship did fans enjoy scintillating action packed women’s final like the 2018 edition when TUKS and the University of Western Cape (UWC) squared up in a titanic struggle that went right down to the wire, with the result being determined in the spell binding 5th set.

Coached by veteran, G.P.Fourie TUKS were a balanced team that oozed with confidence as they were blessed with power attackers, strong blockers and agile players in the back court who chased every ball that went past their blockers or a cheeky dump into unguarded spaces on the court. They possessed the pedigree to lift the coveted Champions Cup silverware for the first time.

However UWC who were gold medallists on four occasions made their intentions quite clear that the Champions Cup silverware will be heading south. Relying on their new signing, Madelyn Pushibin, an American national and Brittany Daniels and middle blockers, Tasneem Claassen and Liezle Petersen taking care of matters at the net UWC stopped TUKS in their tracks by levelling the scores at 10-10. Power attacks and co-ordinated blocks excited the fans who were generous in  applauding sparkling performances of both teams.

UWC’s Bejanke Della, the tournament’s most valuable player marshalled her ‘troops’ to focus on the job at hand, namely to close proceedings in the quickest possible manner. Liezle Petersen’s strong service coupled with Tasneem Claassen’s well disguised dumps pushed UWC’s lead to 18-13. UWC  went on to clinch the opening set with a hard fought 25-21 score.

In the 2nd set, TUKS’ play maker, Natasha Webber serviced power attackers Vitalina Nel , Leese Chapp-leer and Kirsten Pocock with regularity hoping that the trio will post quick points on the board. The trio did not disappoint as they kept the score board ticking with a variety of power attacking. Fighting back UWC’s attack force led by Madelyn Pushibin reduced the points difference to 16-13. Pushibin’s efforts to further close the points gap was stopped by TUKS’ skipper, Margaret Springer whose strong blocking kept the French national in check. Using her beach volleyball experience Springer picked up valuable points through skilful dumping that caught her opponents napping.

Madelyn Pushibin who picked up the best attacker award displayed her attacking prowess when she exploded in to action with a series of powerful attacks that brought thunderous applause from the crowd. TUKS “put life on the line” as they pulled out all the stops to contain Pushibin and respond with equal venom much to the approval of their fans. This time round UWC went on to grab the explosive 3rd set when they posted a 25-19 score to take a 2-1 lead in a best of 5 sets final.

With tremendous crowd support Vitalina Nel ‘raised her hand’ to take the fight to her opponents. Setter Natasha Webber turned to Nel each time with tailor made sets that were converted to points. Taking a quick fire 17-7 lead TUKS were in the pound seat to level the score at 2-2 and force the final to a deciding 5th set. Madelyn Pushibin and Liezle Petersen combined well to pick up 10 points. However TUKS stepped up a gear to grab a 25-17 win in the crucial 4th set.

Throwing caution to the wind both teams chose to blast their way past the blockers to draw first blood. The excitement at times became too intense for the fans as they sat on the edge of their seats waiting for the ball to be grounded in favour of their favourite team.

At 13-13  Liezle Petersen latched onto a quick reverse set from setter Bejanke Della to hammer the spike to a take a 14-13 lead. When Vita Nel fired an attack which just went out of bounds (15-13), UWC and their fans exploded with excitement.