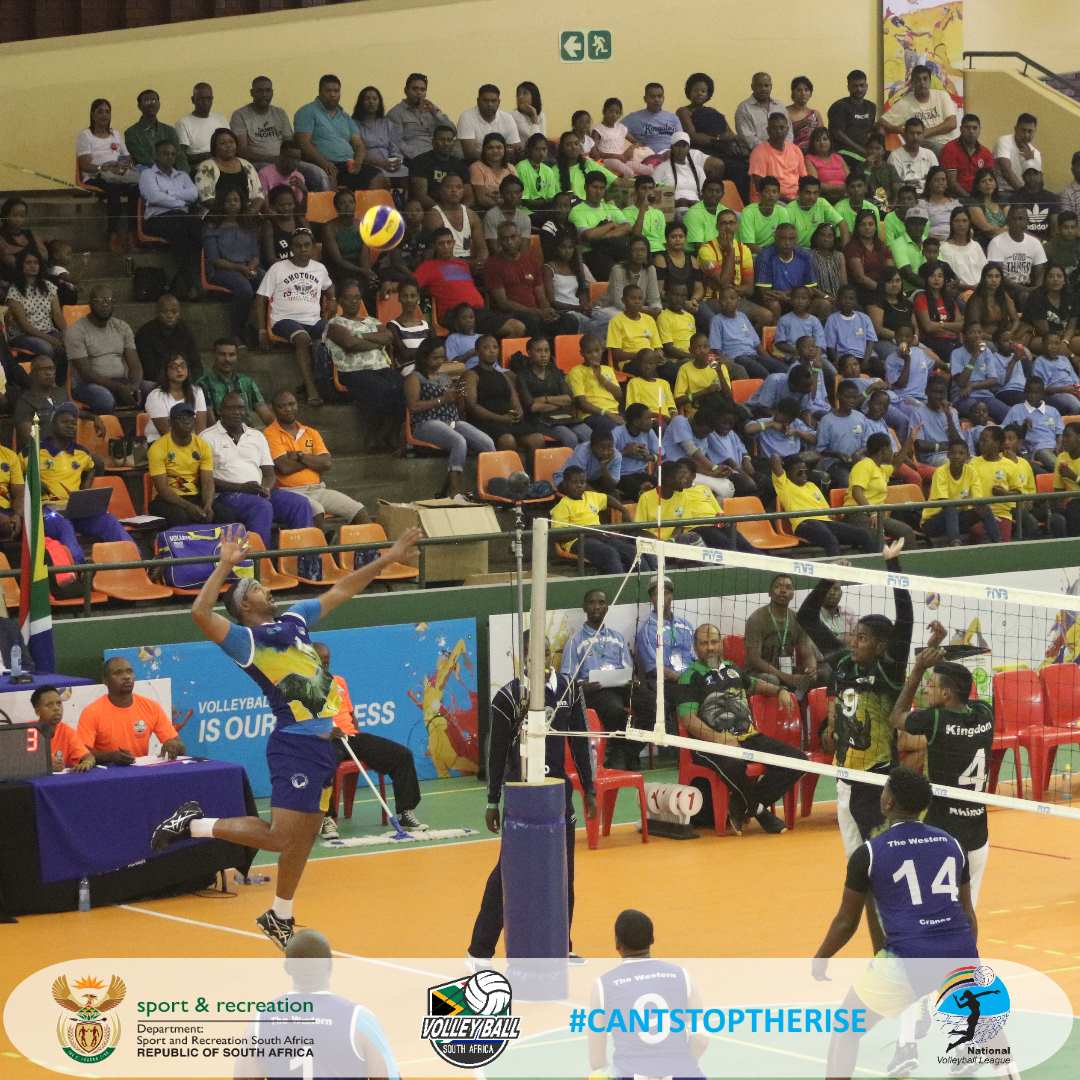 At the outset it was abundantly clear that the Western Cranes game plan revolved around key attackers, Clinton Stemmet and the left handed Ethan May with Freedom Chiya chipping with his trade mark cross court  blistering attacks from time to time.

Even the fans in the stands who were firmly behind the Rhinos knew that  setter Marshallino Jullies’ go to attackers were Stemmet and May. To this end one would expect the Rhinos coaching staff to plan to contain them or at least try to reduce the damage these two attackers can cause. Technical negligence eventually proved to be too costly for the Rhinos who went on to lose all 3 sets by the closest of margins (26-24; 26-24; 25-23).

In the opening set  Rhinos power hitter Devin O’ Regan and middle attacker, Yuvir Ramjit, clearly their star performers kept the Cranes in check by levelling  the points at 8-8. Ethan May’s bullet services caused disarray among the Rhinos back court players, especially when May picked up 3 points in a row.

Devin O’ Regan, Yuvir Ramjit and Quwin Naidoo combined well to once again level matters at 24-24. Stemmet’s all out power attacks especially from the wings proved to be costly for the home side as they lost the set by a heart breaking 26-24 margin.

Explosive exchanges at the net continued, the Cranes powerful middle blockers, Velisa Ntshuntshe and Ivan Solomons often turned attackers when serviced by setter Juliies pounded home the points. Clinton Stemmet posed too many problems for the Rhinos who struggled to contain him. Things became even worse when the left handed Ethan May fired powerful spikes from the utility position.

Urged on by the home fans the Rhinos stepped up their game and matched the Cranes for fire power through Quwin Naidoo, Devin O’ Regan and Sandile Khoza.

Despite the Rhinos committing 3 service faults, middle attacker Yuvir Ramjit quietly got on with the job of increasing his team’s points every time that he connected with play maker, Kiresh Harilall’s sets. With Yuvir Ramjit winning points one wonders why the youngster was not used more often.

Rhinos’coach Jayson Govender brought on back up setter, Ryan Lahldas  to reignite his attackers. The impact was immediate as the scores were tied at 23-23. A great rally ensued from a power play in which the Rhinos libero, Eshalan Chettiar retrieved a ball that was directed far beyond the court and finally finished off with a Devin O’ Regan power attack to give the Rhinos a 24-23 lead. Rhinos’ skipper Quwin Naidoo rushed an attack which went out of bounds and tied the score at 24-24.

Eventually a quick attack from the Cranes middle blocker, Velisha wrapped the set up with  26-24 win.

The closely contested 3rd set was fought on a knife’s edge with the score board ticking evenly. The Cranes attackers’ tendency to use the Rhinos’ wing blockers out stretched hands paid off although at 22-22 the Rhinos could have sealed the set had they put the brakes on Clint Stemmet and Ethan May.

The Western Cranes grabbed the set with a 25-23 score line to become the National Volleyball League’s inaugural winners.