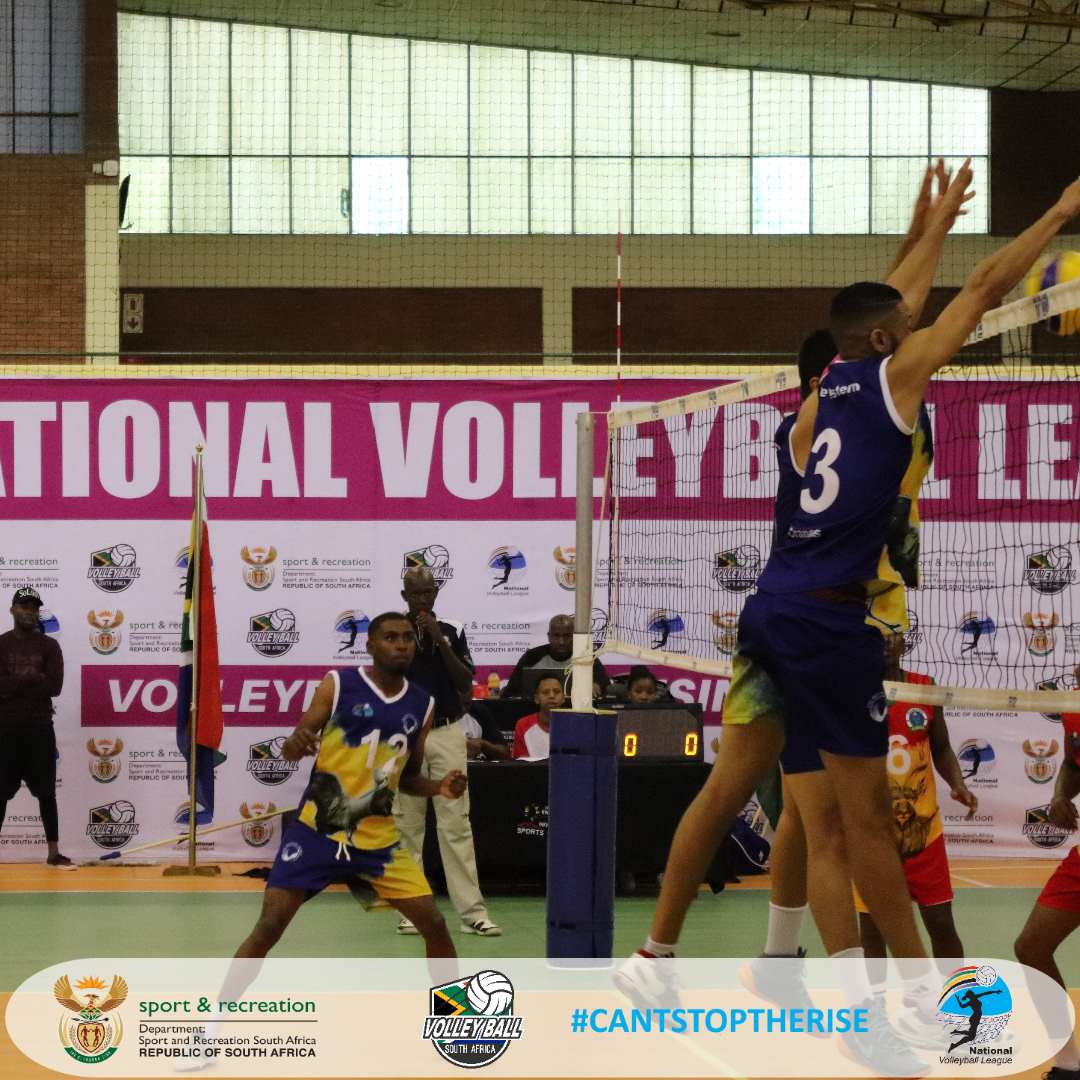 Sports pundits often say that a team’s performance depends on the strength of their opposition. For bottom of the log standings, the Diamond Kudus whose only claim to fame at the 2018 National Volleyball League (NVL) is winning a set against the Mpumalanga Buffaloes were clearly intimidated by the high riding Western Cranes star studded line up.

Although tournament favourites, the Western Cranes had no fear of losing their final round robin match against the Diamond Kudus from the Northern Cape they started the encounter with their strongest line up.

With feared attackers, Clint Stemmet, Freedom Chiya and Ethan May in explosive form one would have expected the Western Cape outfit to close proceedings in double quick time.

However the Kudus sense of urgency on court to get to the ball early to set up their attacks especially through Michael Smith and Boitumelo Moloto restored some respectability on their scores. The opening set ended with a 25-17 score in favour of the Western Cranes.

Posting a 18-9 lead the Western Cranes 2nd string players were given an opportunity to showcase their skills and gain valuable experience at this level of competition. With Clayton Pretorious taking charge of the offensive play a supply of tailor made sets were evenly distributed to give all his attackers a chance to impress their coach. Darren Lewis, Leonardo Booysens, Hlumelo Mashiya  and libero Hayden Eaves were thrown into the fray.

At 24-16 Mashiya rose quickly and slammed a delivery  from Pretorious to wrap the set up with a 25-16 score line.

The contest was on for who will occupy the 6th position on the log table and as such the Mpumalanga Buffaloes made their intentions clear from the outset that they were gunning for the 6th spot.

on their weaknesses. However the closely contested set was captured

(26-24) through the efforts of Thokozane Sibiya who was never afraid to attack.

With a 2-0 lead one would expect that the Buffaloes will come out with guns blazing to wrap up the 3rd set and close proceedings in straight sets.

However the Free States lads had other ideas. They entered the court determined to stamp their authority on the game. For their determined efforts they were rewarded with a 25-20 win. Continuing with their winning ways they recorded a resounding 25-12 win that seemingly spelt disaster for the Mpungalanga side.

Fought on a knife’s edge the crucial 5th set could have gone either way as the score board was kept ticking evenly up to 14-14. The Buffaloes key attacker Thokozane Sibiya played a crucial role in keeping his team’s hopes alive of victory in the tightly contested encounter.

A quick cross attack from Buffaloes’ Sibongiseni Mbuyane beat the Free State cover players extending the scores to 15-14. In response the Free State Giants’ “no nonsense” attacker, Koali Possa rose to pound a down the line spike that unfortunately went out of bounds. Possa held his head in shock that he missed the line and lost the set by a heart breaking 16-14 margin.

The final match in the round robin stage of the inaugural 2018 National Volleyball League between Gauteng Thunderbolts and North West Dynamites had sparkling moments of entertaining clashes at the net that thrilled the local fans.

Putting aside their straight sets (25-18; 29-27; 25-16) defeat against KZN’s Kingdom Rhinos the previous night the Gauteng lads faced their opponents from the North West Province in a relaxed and more jovial manner. The new approach spurred on  attackers Jamine Naidoo, Bekhani Dube and Thabiso Lekoloane, the Thunderbolts star performers who went on to post a convincing 25-13 first set win albeit through play maker, Warren Sieberts ability to create a variety of attacking options.

While the 2nd set was marred by some scrappy play at times Thunderbolts Jamine Naidoo who was at his fluent best in this encounter was devastating in attack from both the front court and when he was a back court player. Keifer Govendr and Thabiso Lekoloane pitched in by adding to the Thunderbolts scores.

The Dynamites setter, Mvuleni Tap tried his best to reignite his attack force by  serving his attackers with the quicker set to beat the imposing blockers at the Thunderbolts side of the net.. Boitumelo Moloto and Thabo Rammile had some success from time to time to keep their scores moving. Failing to contain the powerful attacks from Jamine Naido resulted in the Dynamites succumbing to a 25-14 loss.

The Gauteng team lost their rhythm when changes were made to give game time to their 2nd string players. With the return of Jamine Naidoo to the attacking force the Thunderbolts moved out of the danger zone when the scores were tied at 23-23.

With the North West Dynamites serving to level the points when the scores were tied at 24-23 in Thunderbolts’ favour the service failed to cross the net, handing the 3rd set to the Gauteng Thunderbolts by a nervous 25-23 margin.

The Gauteng Thunderbolts will meet KZN’s Kingdom Rhinos in the semi finals on Saturday.