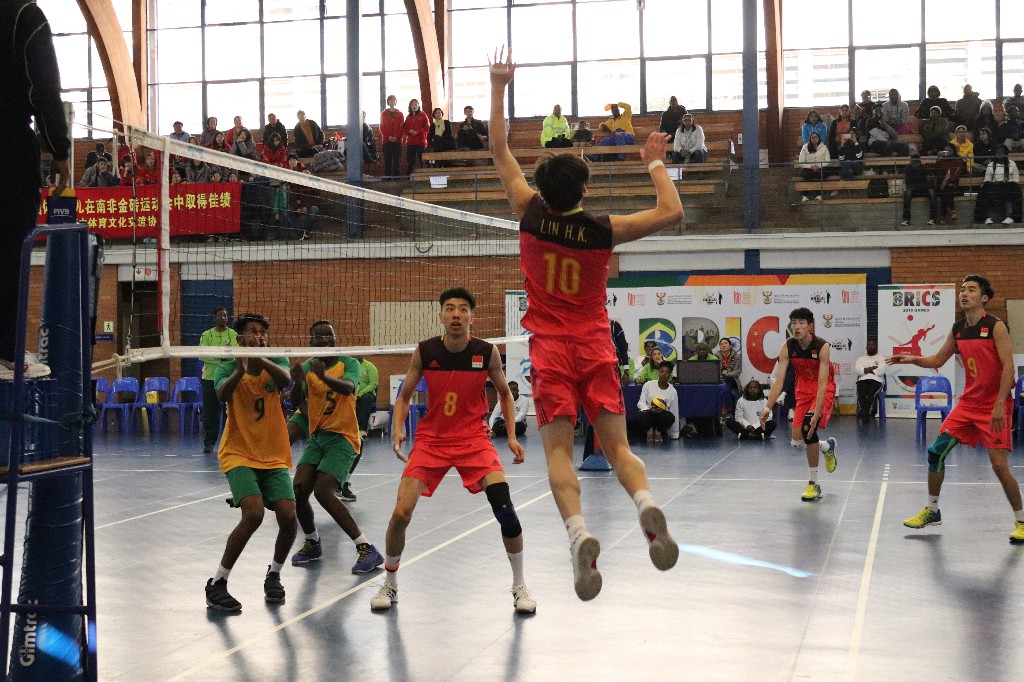 The South African Men’s under 20 volleyball team squared up against China the highly fancied  Asian giants in the opening fixture of the 2018 edition of the BRICS GAMES staged at Wits University’s Old Mutual Sports Hall in Johannesburg.

Refusing to be intimidated by the unusually lanky Chinese counterparts the SA lads  drew strength from the “Madiba Magic” and took the fight to the over confident Chinese team.

SA’s mercurial play maker, Sandile Ncobo was in fine form as his nimble fingers were the launching pad of a variety of attacking options for Dylan Dube, skipper Tshenolo Otsweleng and the hard hitting Andesa Nonkonyane who under normal circumstances would have sealed the match in double quick time. Sadly for the South African attacking machines they were faced with huge blocks from the out stretched hands of the visitors who managed to take the sting out of the SA attackforce. The Chinese experience on the international platform gave them a huge advantage against the minnows from South Africa. Relying on a series of quick attacking in the middle secured the visitors a comfortable 25-16 first set win.

The South African fans were delighted when Tshenolo Otsweleng’s young charges levelled matters at 8-8 in the 2nd set and went on to take a one point lead (9-8).

Unfazed  by a renewed South African “blitz krieg” approach to unseat them the Chinese beefed up their defence at the net that swung the fortunes in their favour.

With setter Wen Zi Hua taking advantage of tailor made passes from his back court receivers he had the luxury of bringing the best out of his attackers led by Zhang Xin Yi and Lin Hai Kun who went on to close proceedings 25-18 score line.

It was expected that the South African lads will come out with “guns blazing” in the crucial 3rd set, as defeat will result in the home side losing the encounter in straight sets (3-0).

Taking a 3-2 lead gave the SA lads the edge to push the opponents “against the ropes” and win the set that will pave the way to an upset victory.

A tongue lashing during a time out by the Chinese Head Coach, Gong Zai Feng seemed to have spurred on his lads who stepped up a few gears that “put day light” between themselves and the SA team.  Zang Xin Yi and his fellow power attacker Lin Hai Kun went on to put the match beyond the reach of the SA lads with a 25-16 win.

While the South African team lost in straight sets (3-0) to the experienced Chinese outfit there is every indication that they will do well in African continental championships.